yes I said yes I will Yes 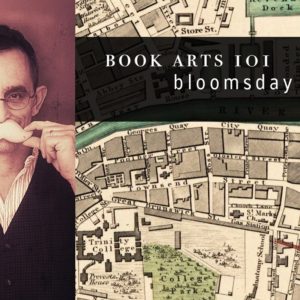 Join me today if you can: Wednesday June 16 at 3 PM Eastern on Zoom Webinar: It’s a Book Arts 101 broadcast we’re calling Bloomsday for it is Bloomsday today, and I am in the midst this summer of reading James Joyce’s Ulysses, and it has me bewildered and amazed, and since my show is about books and Ulysses is thought of as perhaps the greatest of them in the English language, I figured yes I said yes I will Yes. Folks follow the June 16, 1904 journey of Leopold Bloom for Bloomsday, and my approach is this: I’ll take you on a Bloomsday-inspired journey through artists’ books from the Jaffe Center for Book Arts, that strange place where I work.

I’ve put a solid week into growing a suitable Edwardian mustache for the occasion, though, to be honest, I’m not sure it’s going to make it to the broadcast. A week, it turns out, is not long enough to make substantial progress but it is just long enough that I stop short as I catch glimpses of myself in the mirror and think What the… ? As with most things in my life: we shall see what we shall see. To watch this Book Arts 101 broadcast live on Zoom, you’ll need to register. It’s free, it’s simple. Do so by clicking here. If you can’t make it at 3:00, you can catch the video once the broadcast is done at our Facebook page.

Bloomsday is part of what I love about June, a month of holidays captured in books and stories. It’s the month of midsummer and William Shakespeare gave us A Midsummer Night’s Dream for St. John’s Eve on the 23rd. Ralph Ellison, he gave us his unfinished novel, Juneteenth, for that sacred day on the 19th. And James Joyce, he gave us this day when we are transported to Dublin, 1904, and all week already the lovely Kate Bush has been singing her Sensual World song in my head. It is a rich time of year for bibliophiles and English majors and all of us who find our breath taken away by the things of this world.

So here: whilst I gather my books and check once more on my mustache, read, if you will, last year’s Convivio Book of Days chapter for Bloomsday. It will give you a bit of history and some suggestions on how to make the day perfectly grand. And if you’re watching at 3, well, you know I’m glad you’ve come to visit. There’s no question about it.

June 16th and now it is Bloomsday, a holiday born of a book. Some consider it the greatest book written in the English language: Ulysses, by James Joyce. The book takes place all on the 16th of June, 1904, in Dublin, following the lives of Leopold Bloom, Stephen Dedalus, and Molly Bloom. Notoriously difficult to read, full of Joyce’s invented Stream of Consciousness writing technique, Ulysses is an affirmation, a yes, of the everyday. And here I am, a guy who encourages you to say yes to the ceremony of each day. An English major, to boot. Of course I love Bloomsday.

And so Joyce enthusiasts the world over today will dress in Edwardian garb and quote Joyce and if they are in Dublin, they will follow the June 16, 1904 route of Leopold Bloom. Our celebration here is a simple one, and I encourage this. My suggestions: Read some Joyce; it doesn’t have to be Ulysses. You might try instead something shorter, like The Dead, the story that closes Joyce’s short story collection titled Dubliners. Ulysses may get the accolades for best book written in the English language, but The Dead may just be its best short story. It takes place at midwinter, not midsummer, but still you get that beautiful James Joyce way of telling a tale. And if you’d rather not read, there is an excellent film adaptation of that same story. It’s directed by John Huston (1987). Music for the day: something Irish and Edwardian would be appropriate, but each year at this time of June the soundtrack inside my head inevitably turns to Kate Bush and a song she recorded in 1989, called “The Sensual World.” It’s based on the closing words of Ulysses, a soliloquy by Molly Bloom, Leopold’s wife.

… and Gibraltar as a girl where I was a Flower of the mountain yes when I put the rose in my hair like the Andalusian girls used or shall I wear a red yes and how he kissed me under the Moorish wall and I thought well as well him as another and then I asked him with my eyes to ask again yes and then he asked me would I yes to say yes my mountain flower and first I put my arms around him yes and drew him down to me so he could feel my breasts all perfume yes and his heart was going like mad and yes I said yes I will Yes.