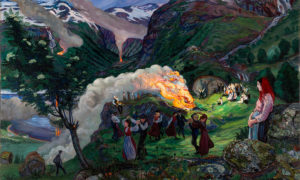 A few days past the solstice, and with the setting sun tonight, we come to St. John’s Eve. You might think of it as the opposite side of the year from Christmas Eve, for indeed it is, as are the days that follow both: St. John’s Day tomorrow, Christmas Day the day after Christmas Eve. These celebrations go back to days that were already considered holy, even before Christianity. The early Church tapped into the imagery but replaced the characters. No one knows when the historical Christ was born, but the early Church decided the Midwinter solstice was perfect for emphasizing the concept of Jesus as Light of the World. They placed the birth of St. John the Baptist at the Midsummer solstice, for it is written that John was born six months prior, and also that he says of Jesus, “He must increase, but I must decrease.” And so Jesus is born at the darkest time of year, as light begins to increase, and John is born at the brightest time of year, as light begins to decrease. Here are the beautiful metaphoric connexions that the early Church loved, linking the story of Christ to the natural rhythm and wheel of the year.

Traditionally, St. John’s Eve is a night to spend out in the open air. In Italy, it’s a night for bonfires, and as Covid-19 quarantines end there, perhaps this will be the case tonight. In Rome, the traditional Midsummer meal centers around snails; local belief holds that eating snails, horned as they are like devils, will protect you from Midsummer mischief of the Midsummer Night’s Dream variety. In the towns of Northern Italy, Midsummer is a time to break out the balsamic vinegar that has for years been aging and developing complexity––sometimes a hundred years or more. Local lore says that every part of the meal must have some of this nectar of the gods in it.

St. John’s Eve has a long history in popular folklore as a portal night, a night when the pathways between worlds is most permeable. It is a night to go and gather plants for their magical properties: fern seed, for example, and St. John’s Wort. The latter will protect you from evil, the former, if gathered properly, is believed to confer the power of invisibility. But not without some peril: the seeds are fiercely guarded by the fairy folk who know more of these secrets than do we (and there is that connexion to literature and A Midsummer Night’s Dream). Closer to home, Seth and I find sometimes, while we are sitting at our Midsummer fire that burns in the copper fire bowl in the back yard, the night air suddenly is infused with spice––the fragrance drifting on the breeze, emanating from the blooms of the Guyana Chestnut tree. The tree blooms only at night, and each bloom lasts just one night, an upright pod that explodes with a crack into an orb of white fireworks. There is so much magic to be found in the darkness of night, and this will be a dark one, as the moon is still new.

And all the same, the night passes and St. John’s Eve ushers in St. John’s Day on the 24th. As for St. John himself, he is sacred to Puerto Rico, Québec, and Newfoundland. He is a patron saint of beekeepers, tailors, innkeepers, and printers like me. Tradition would have us cut and fashion divining rods on his day, for hidden treasures are thought to reveal themselves on St. John’s Day. Explore lonely places, it is said, and there these treasures shall be, awaiting any lucky finder. The magic passes with the day.

Here’s another fine way to celebrate: Join me tomorrow, 3 PM Eastern, Wednesday June 24, Old Midsummer Day, live on our Facebook page for Book Arts 101: Midsummer Night’s Dream. We’ve been broadcasting live from our studios each Wednesday at 3 during quarantine, and in this week’s episode, I’ll be showing books and prints that touch on Midsummer and magic. If you can’t be there for the live broadcast, you may still watch the video later at that same Facebook page. You know I love to see you.