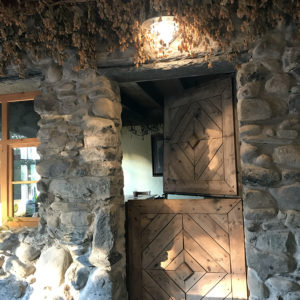 Well, hello! It’s been a while. I inadvertently took a small vacation from the Convivio Book of Days, which is maybe best attributed to summer laziness, and if you’re ok with that explanation, so am I. The equivalent of a “Gone Fishing” sign posted on the shop door. Summer does this to us. The peaches have been extraordinary this year, sweet and juicy, and the weather has been hot, which is as it should be, of course. But now comes August, which brings a bittersweet time of year. Especially if you are a kid, or someone who works in a school and has had the summer off… for August brings the understanding that summer is waning and not long from now it will be back to school and workaday schedules.

It’s different for everyone, of course. That was always the feeling that August brought to me when I was in school. Nowadays, though, I feel different about August. Probably because I do not have summers off, and––here’s the big thing––because I live in Florida. Summer came to settle in here sometime in May and now I know we are halfway through the constant heat and humidity. I just have to make it through August and September––the height of hurricane season––and then I know there will come a day in October when the weather will change and things will feel cooler, drier. August can bring on a bit of that punch drunk feeling that Florida summers bring, and if August doesn’t do it, September will. But still, we know that summer’s days are numbered.

Our ancestors knew this, too, and they celebrated this transition from July to August with a holiday little known today. It’s called Lammas. In the Celtic tradition, it’s called Lughnasadh (LOO-na-sa). Daylight in the Northern Hemisphere has been waning with each passing day since the solstice of June and this cross quarter day marks the midway point between the solstice and the approaching equinox. Lammas brings the first of the harvest festivals, and if the word “harvest” calls to mind autumn, that is not so bad, for our ancestors also considered Lammas just that: the transition toward autumn in the wheel of the year. In seven short weeks’ time, daylight and darkness will be balanced, and the days beyond will grow shorter and shorter still.

And so we enter Lammastide, tonight with Lammas Eve, tomorrow with Lammas proper. These days and nights are marked well by simple things made from the grains that are traditionally harvested at Lammas: a fresh baked crusty loaf and perhaps a pint of ale or a dram or two of whisky. Indeed, the name Lammas descends from the Old English hlafmaesse, or “loaf mass,” so the idea of loaves of bread celebrating the First of August goes back a very long time, to time immemorial. I see no harm in getting a loaf for the occasion from the local baker, rather than baking your own. Savor it, crumbs and all. And if you take a drink, then please raise your glasses to each other and to me, if you will, and to old John Barleycorn, the grain, personified. Summer is waning, autumn is coming, and we begin to turn our thoughts toward gathering in. John Barleycorn brings a bit of melancholy but a bit of warmth as well––warmth in his crusty bread, warmth in his spirits, warmth in the ones we gather with to celebrate. Happy Lammastide.

Image: On our recent travels through Europe, though it was July, I felt like Leonhardts Stall-Besen in Humbrechts, Germany, was looking ready for Lammas. The meal was amazing, and I’ve always had a thing for wooden Dutch doors.