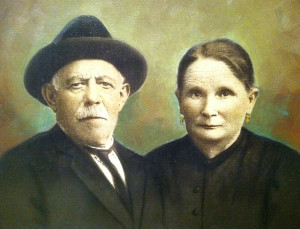 My family has lived in three different houses since I was born, and here’s what’s immediately apparent about the house they live in now, the house they’ve lived in longest: the kitchen is the center of the home. Not just culturally, but geographically, too. It’s right there, smack dab in the center, and everything in that house––the rooms, the people––revolve around it. Ring the bell (or come in through the garage, which is more common) and you will, most likely, promptly find yourself escorted to the kitchen. It is the hub, it is the epicenter, it is the sun.

If you’ve seen the film Moonstruck, you’ve met my family. All of my grandparents were born in Italy, in Apulia, and they emigrated to the United States in the early 20th century. They settled in Brooklyn, which is where my parents and my sister were born. I grew up removed from both: Brooklyn was the place my dad drove to each day for work and Italy was a place that, in my mind, was sepia-toned. When my grandparents returned from their first and only journey back to the old country in 1970, I was genuinely shocked to see color in the photographs.

It wasn’t long after that we packed up and headed south to Florida, which was, to me as a kid, a strange green land. I was young enough, apparently, to grow up sounding not at all like the rest of my family. And it took growing up here, being fully immersed in the place, to grasp the subtle seasonal shifts that occur as the seasons pass. It may seem like summer year round in Florida, but it’s not. The cycles of the year are subtle, but they are here, apparent in changes in the quality of light, or the hues of color. The winds change as do the sounds and fragrances carried upon them.

I can say for sure that the Convivio Book of Days project is inspired by all of these things: by this constant exercise in subtlety that is the nature of the cyclical year here, as well as the desire to connect our contemporary days with days past that were, perhaps, held more sacred. And, certainly, by family. My family has always held certain days sacred, and, for the most part, that sacredness is expressed through food. One of my earliest memories involves my mom and my grandmother in the kitchen, baking for Easter. They made the traditional Italian taralli, but Mom also that year tried a new recipe out of a booklet from Gold Medal flour, for individual sweet yeast breakfast breads wrapped around a whole egg that cooked in the shell as the bread baked in the oven. They were called Humpty Dumpties and I drew the faces on the eggs after they cooled and I don’t think there’s been one Easter since that hasn’t included them. That’s a lot of Humpty Dumpties.

We can also thank my local libraries. The Glades Road Branch of the Palm Beach County Library System in particular, where, one October when I was a new uncle, I found a book that may have been titled How to Haunt a House, which was an excellent introduction to returning to a good old-fashioned Halloween celebration, and which may very well have served to rekindle my interest in celebratory days. Later on, roaming the stacks of the Wimberly Library at Florida Atlantic University, I found a wonderful old book, printed in the late 19th century, on holidays. I don’t recall the title or the author, but I checked that book out on a pretty regular basis while I was a student there and I read it through and through many times. Librarians there who make decisions about what books stay on the shelves and what books need to go to make room for new ones have since discarded that book (and perhaps this is a lesson to librarians, too: your decisions have consequences, and even books that have not been checked out in a long while may actually be of interest to someone, someday). And when I attended the University of Alabama, another library roaming (I do a lot of that, I guess) at the Gorgas Library uncovered a real treasure: The Book of Days: A Miscellany of Popular Antiquities published by the Chambers Bros. of Edinburgh, 1869, which really set this ship on its course.

Lesson learned: Thank your families and thank your libraries. Cherish them both.

Finally, a note on Time: there is calendar time, which has been decided upon over the centuries by emperors, popes, and other political leaders. Gregorian is the calendar used worldwide nowadays, but you’ll notice that the random date selected as the start of the new year varies across historical calendars. So while we agree pretty much across the globe now that the first day of the year is the First of January, many cultures traditionally follow a lunar calendar, which is why we have holidays like Chinese New Year and Rosh Hashanah, cultural new year celebrations that are not fixed but moveable dates. In the Convivio Book of Days, while calendar time is of great importance, we are equally concerned with traditional time. You will often hear us speaking of “the traditional reckoning of time,” and you will see references to this throughout the year. It is a system based on the natural cycles of darkness and light and of awakening, abundance, death, and rebirth. It will all make sense if you stick with us through the cycles of the year. Promise.

Pictured above: My great grandparents Raffaele and Maria in Lucera, Italy. They probably were more fun than they look.