Somewhere in the Stars: Tanabata 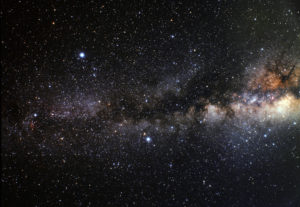 We are in the midst of summer and a period ruled by stars: Sirius, Altair, and Vega. Sirius, the Dog Star, entered onto the scene a few days ago: by July 3rd, Sirius, in the constellation Canis Major, began rising with the sun. The sun occupies the same part of the sky as Sirius through the middle of August. It just so happens to be the hottest time of the year while all this is going on… and so we call these hottest days of the year, ruled by Sirius, the Dog Days of Summer.

That’s our story about Sirius in Canis Major. Meanwhile, here is an old story from Japan that relates to our other summer stars, Altair and Vega: It is the story of Hikoboshi, the Cow Herder, and Orihime, the beautiful daughter of the Sky King, Tentei. Orihime wove beautiful cloth on the banks of the Amanogawa, the Milky Way. Her father loved the cloth she wove, and so she worked very hard to make enough for him so that he would always have plenty of it. But Orihime worked so hard at her weaving that she never had time for anything else. And as much as Tentei loved the cloth Orihime wove, he knew she needed some balance, some time away from her work, and so he arranged for her to meet Hikoboshi, the Cow Herder, who lived on the other side of the Amanogawa.

And so Orihime and Hikoboshi met. They fell in love right then and there. The two soon married, and that was wonderful, but they became so enamored with each other that all else fell by the wayside. Orihime pretty much gave up her work at the loom, and as for Hikoboshi’s cattle, well, they were soon roaming all over Heaven. Tentei grew angrier and angrier over all this, until finally he had enough. He separated the two lovers on either side of the Amanogawa and forbade them to see each other. Orihime despaired over the loss of her husband and pleaded with her father. Moved by his daughter’s tears, Tentei relented. But he allowed the two lovers to meet only once each year, on the seventh day of the seventh month. And so the story goes each year, and here we are today: the seventh day of the seventh month. It is the Japanese star festival, Tanabata.

As stars, the lovers are Vega and Altair: Vega, the Weaver Star, is Orihime, and Altair, the Cowherd Star, is Hikoboshi, separated always by the Milky Way, except, as legend has it, for this one night each year when they are reunited. Beneath the stars, here on Earth, we honor Orihime and Hikoboshi by writing wishes on strips of paper and tying them to the trees. Bamboo is traditional, and that’s what I tied my wishes to last year, but I would think any tree would do. Heaven and the stars, I am sure, grant us a bit of leeway in these matters.

Two or three of my wishes from last year remain still on the bamboo outside our back door. The ink is long faded. I know I wished for protection, and for good health for us all, and especially for my father. His health gradually faded over the seven months that followed, until his death in February. But I am grateful he did not suffer terribly, and so perhaps that was the best manifestation of my wishes for good health and protection. Will I write some wishes on paper and tie them to the bamboo this year? Probably, though it most likely won’t be until after dark. There are no rules about that, either, and if there are, well, again: Heaven and the stars surely can be flexible with us mortals.

Perhaps it is all these thoughts of stars, but there is a song that popped into my head last night, a song I’ve not thought of in years. In 1982, when my grandpa Arturo died, Rosanne Cash released a record called Somewhere in the Stars. I know the title track is a sappy love song, but even so, I was able to reinterpret it for my own situation. It meant a lot to me then when I was missing Grandpa, and it suddenly means a lot to me tonight, too, missing him again, and my dad, and everyone else who is somewhere other than where I’d like them to be (like right here in front of me). If it’s a little sappy, so be it. I’m a little sappy sometimes, too, and there are nights when we need stories about dog stars and star-crossed lovers and reminders of all the ones we love.

This chapter of the Convivio Book of Days was originally printed on the 7th of July, 2017. Three years later, the sentiment is the same. Top Image: A very particular Somewhere in the Stars. This is a Hubble Telescope wide field image showing the “Summer Triangle,” a giant triangle in the sky composed of three bright summer stars: Vega (top left), Altair (lower middle), and Deneb (far left). Can you make out the triangle? [Public domain] via NASA, 2009.

Lago di Como, or Your July Book of Days 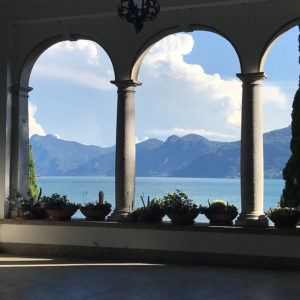 And now six months of the year have flown. We have passed the point of solstice––of “sun stand still,” when the sun seems to stop its motion. We had about three days then of longest days in the Northern Hemisphere, the days where we reached the apex of daylight, the number of hours of daylight remaining constant. And now, on the other side of the solstice, our days decrease in length. Just a little each day. Summer is maturing. The leaves have lost their springtime brightness and have mellowed into a deep dark green. Fruits and vegetables are coming in from the orchard and the garden. By the end of July, we’ll be welcoming Lammas Eve and the first of the harvest festivals. In the wheel of the year, the only thing that stays the same is change. The Earth constantly is rearranging.

Last year at this time Seth and I were visiting Northern Italy, Eastern Switzerland, and Western Austria. From one lake to another: Lago Maggiore, Lake Constance––the Bodensee, Lago di Como. Lake Como is our cover star this month. Here it is: your Convivio Book of Days Calendar for July. It is, as usual, a printable PDF document, and a fine companion to the Convivio Book of Days Blog.

Join me today, Wednesday July 1 (and every Wednesday) at 3 PM Eastern, for Book Arts 101: Home Edition, live on our Facebook page. Each week I spend about half an hour chatting about books, craft, design, and whatever else drifts through my head. For Episode 14 today, we’ll be focusing on Real Mail and the joy that comes with spying something special in the mailbox amongst all the bills and clutter. I’ll show you some brand new arrivals by great printers like David Wolfe of Wolfe Editions in Portland, Maine, Amos Paul Kennedy, Jr. of Kennedy Prints in Detroit, and Catherine Alice Michaelis of May Day Press on Vashon Island, Washington. I’ll show you some books, too, from the Convivio Collection that have their roots in letters: books that were inspired by letters, books that are letters, books that feel like letters. Here’s a direct link to today’s live broadcast. If you can’t be there at 3, fear not: video is posted soon after the broadcast is done and is always available at our Facebook page.