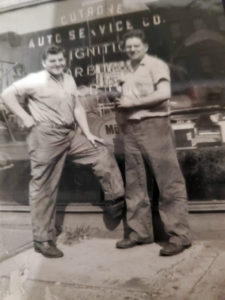 My cousin Al came to visit us this past weekend. He’s been here from New York for a few weeks and he wanted some time to pass between his travels and his visit with Mom, just for the sake of caution, but Saturday he came to the house and the five us had a good meal and shared a lot of laughs and stories, too. Essentially, it’s the thing my family loves best, and especially Mom, and it’s probably what Mom misses most these days: just sitting down at a big table groaning heavy with food and eating and laughing. Card tables with people far apart from each other is just not my mom’s style, but we do what we have to do to stay safe. Dinner with Al was wonderful all the same.

Al’s father and my father were brothers, and when Dad was looking to open an auto repair shop in Brooklyn, he asked my Uncle Al to be his partner. And so they were, for thirty years, from 1948 when they opened the shop until the day they closed it, in 1978. Al is a little older than I am, so while I spent my early summers at the beach, Al got to go in to work with his dad to earn some money. Neither Al nor I took after our dads––our combined mechanical knowledge doesn’t extend much past how a screwdriver works. But Al, at least, got to spend time at the shop, and he got to see the Cutrone Brothers doing what they did, and I envy that.

My dad was not the most patient of teachers, but I think Dad got a bit of a kick out of the things I put him through. I can remember he and I setting up my Aurora HO Thunderjet 500 slot car track on the billiard table in the basement when I was a kid. I was probably 7 or 8 years old. We worked and worked on it (well, Dad did, while I fiddled around), and when it was time to try it out, Dad told me to “give him some juice.” I went to the kitchen and poured him a glass of orange juice. That event pretty much set the stage for my mechanical abilities for the rest of our years together.

It seems my cousin Al did not fare much better; nonetheless they took him in to the shop each summer when he was a teenager, and it was pretty wonderful Saturday night to hear Al’s stories about working with the guys, including the Cutrone Brothers’ methods for tire disposal (let’s just say it was another time) and how they ended up with so much ice cream one summer that Aunt Marie felt the need to buy a new deepfreeze.

The stories were good, and the company was good. And while I did not wake up this morning planning to write about this, something about the stories reminded me about the picture in the photo album of Dad and Uncle Al in front of their shop and this is how it is to be a writer. One thing leads to another and memories start kicking around in my head, and one thing I will always remember about Al is that four years ago, in early February, Al visited my dad in his hospital room after his stroke. Dad was so animated when Al was there. It seemed like the best night he’d had in a while. A few days later, Dad was gone. It surprised all of us. And still at night before bed I turn out the lights and I say goodnight to photographs of the ones I love and very often I have to remind myself that Dad is not here, not in the same way. And maybe that’s ok. Maybe it’s good I usually feel like he is.

I remember pretty much everything about the way the 8th of February played out four years ago, from the time I left work early because I felt I needed to get to the hospital to check on Dad, to my journey, right after I arrived, walking behind his bed as he was rolled down to ICU, to the long wait while I was not allowed in, and all of the other things that led to the way things turned out in the overnight hours that followed. It is, perhaps, the day of the year I dislike most. We all have these days when we are reminded of what we would rather forget. But they, too, are part of the round of the year, and we have no choice but to take them as they come. It has been a tough time for so many, this year and last. If you’re having a rough go of it right now, I can tell you that I get it, and I can tell you that you are walking in good company. We’re all there with you. And while, when it comes to loss, things never get easier, they do change. You will always miss the ones no longer physically with you, but the way you miss them will change. Every now and then, though, a jolt will come. Expect this. It’s part of the path, and there is no right way to deal with it. You carry on. You get through.

Today, chatting with Mom, I learned some new things about the garage. Before it was Cutrone Auto Service Co., it had been a millinery, and Phyllis Caputo, the woman who set up the blind date that was my mom and dad’s first meeting, worked there making hats. Next door to the millinery, back then, was an Italian merchant who made all kinds of pasta. Records show that earlier on, the shop was another garage: the photo below is from 1915. 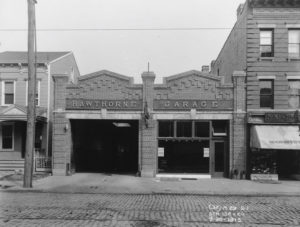 I look at the picture of Hawthorne Garage, and I know that at some point, in 1947 or so, Dad and Uncle Al saw that same empty garage that’s in the 1915 picture and thought, Yeah, this place has some potential. And then I look at the picture of Cutrone Auto Service Co., circa 1948. Dad and Uncle Al are smiling, their trousers are mucky… they are two men happy in their work. That shop looks like a great old building. Seth and I drive by old garages these days on Dixie Highway and sometimes we think, Now THAT would be a great place to set up a Convivio Bookworks shop. I didn’t get much mechanical knowledge from Dad, but I did get that ability to dream. And some pretty great stories, too. And even more of them now that Cousin Al has come to visit and reminisce with us.

Love to you all.