Wind on the Wold, or Your March Book of Days 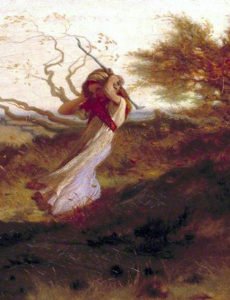 And now it is March, a month often thought of as unpredictable: mild, then freezing cold, calm, then stormy… and a month filled with blustery days, to be sure. There is an old weather rhyme associated with the first few days of the month:

David refers to St. David’s Day, which is today: a day sacred to Wales and a day for the wearing of leeks and daffodils on the lapel and for the making of Welsh cakes. (More on that later.) Chad and Winnal refer to the two saints whose feast days follow St. David’s: St. Chad on the Second and St. Winnal on the Third, both of them ancient saints largely by now forgotten here on earth––which may explain why Winnal is so roaring mad. Then again, it may simply be because his month of March is one of the transition months, which makes complete sense, an idea I’ve only just come across recently in my reading of this year’s Almanac by Lia Leendertz, an annual seasonal guide that I discovered last year when my friend Lisabet Summa gave me a copy of the 2020 edition. As Lia explains it: the days are growing longer, the sun is higher in the sky, and the air is being warmed by the sun. But cold pockets of air still remain. The warm air rises, and as it does, cool air swoops in to replace it… thus, wind. My description may be a bit of a simplification, but I think it relays the general idea: that wind, as Lia Leendertz says, is “nature’s attempt to even everything out and create an equilibrium.”

To honor this, our monthly gift to you, the Convivio Book of Days calendar, this time around features the winds of March as its cover star, as depicted in a painting by George Heming Mason, 1863. The calendar is, as usual, a printable PDF. Click here and it’s yours. The calendar is a fine companion to this blog as we walk through the month together and seek the equilibrium that nature seeks, too, in its windiest days.

Back now to St. David’s Day: Dydd Gŵyl Dewi Hapus is the St. David’s Day greeting in Welsh, but in English, a simple “Happy St. David’s Day” will do. In Wales, it is a day of national pride and national celebration, similar to St. Patrick’s Day in Ireland. It is a day of leeks and daffodils, perhaps because both are similar in name in Welsh. The legend of the leeks goes back to an ancient battle in Wales in which St. David himself is said to have advised the Welsh troops to wear leeks in their caps in order to distinguish themselves from the Saxon troops they were fighting. This animosity between the Celtic Welsh and the Saxon-descended English went on for some time. Here’s a story I relate most years on the First of March: it’s an old story of a man traveling on horseback in the north of Wales who comes to a river that he wishes to cross. There was a man working the field nearby, so he asked, in English, if it was safe to cross the river and the laborer replied, in English, that it was indeed. The horse, however, knew better, and refused to pass into the river. So the man upon the horse asked the laborer once again if it was safe to cross the river, this time in Welsh. “Oh, I beg your pardon, sir,” said the man on the ground. “I thought you were an Englishman.”

I hope by now that the Welsh and the English have come to be at peace with each other. The leek is now a symbol of Welsh national pride, as is the daffodil. And perhaps the Welsh cake, too. Here’s our recipe:

It’s not uncommon to find recipes for Welsh Cakes that call for regular granulated sugar, butter, and nutmeg, but the traditional recipe will add lard to the mix, use caster sugar in place of the regular sugar, and will be flavored with the more mysterious flavor of mace. If you want the best Welsh Cakes, stick to the traditional version. If you can’t find caster sugar, make your own: pulse regular granulated sugar in a blender until very fine. Do not use powdered confectioners’ sugar, which has added corn starch.

Whisk together the flour, caster sugar, baking powder, mace, cinnamon, and salt in a mixing bowl, then work in the butter and lard with your fingers until the mixture has the texture of course crumbs. It’s ok if some larger chunks of butter remain. Mix in the currants. Add the beaten egg, working it into the mixture, adding just enough milk to form a soft dough that is not too sticky. Wrap; chill in the refrigerator for 30 minutes or until you are ready to make the cakes.

Turn the dough out onto a floured board and roll to a thickness of about ¼”. Using a biscuit cutter (scalloped, if you have one), cut into rounds. Gather up any remnants to roll out again and cut more cakes.

Heat a lightly buttered skillet (cast iron works great) over low to medium heat, cooking the cakes until each side is lightly browned (about 3 to 4 minutes… if they’re cooking quicker than that, lower the heat). Let the cakes cool for a minute or two, then set each in a bowl of granulated sugar, allowing sugar to coat both sides and the edges. Best served warm, split, with butter and jam, or, for a more savory treat, with cheese and leeks, at a table set with a small vase of daffodils.

Image: Detail from “Wind on the Wold” by George Heming Mason. Oil on canvas, 1863. Used with gratitude through Creative Commons [Public domain] via Wikimedia Commons.

MASK UP SALE! It’s the final few days of our current sale on masks: Buy any four or more of our beautiful triple layer embroidered face masks and you’ll automatically save 24% plus free shipping to US destinations! It’s practically like getting one mask free (and all of them shipped to you for free, too). These triple layer masks are made by an extended family of artisans in Chiapas, Mexico, who truly appreciate every sale. So please throw a little transactional support their way if you can, while helping to keep yourself and those around you safe so we can gather again someday without thinking twice about it. And if you need us to ship to destinations outside the US, email us first and we can make arrangements to ship for just $1 per mask.  Click here to start shopping! 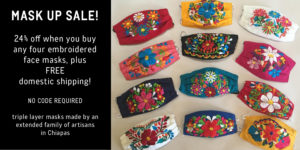 Click on the picture to see a full size version of it… the masks pictured here are the floral ones, but we also have other designs featuring calaveras, Frida Kahlo, Catrina, Maria Bonita, Our Lady of Guadalupe, sugar skulls, and mandalas, too. All of the Otomi-inspired masks are currently sold out, but we’re ordering more for March delivery.