Year of the Metal Ox 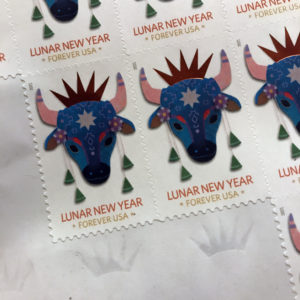 The new moon this month brings Lunar New Year, and in the Chinese tradition this new year is the Year of the Metal Ox, and in the Tibetan tradition, where the new year celebration is called Losar, it is the Year of the Iron Ox. Both traditions begin with a thorough cleaning of the house before the celebration begins, to wash away all bad things from the previous year, and now that it’s begun, there is feasting with family and with friends and there are dumplings, round like the year and the sun that shines above.

Here is how the ox came to be second of the twelve animals of the Chinese zodiac: When the Jade Emperor announced that the order of the zodiac animals would be determined by when they each arrived at his palace, it was pretty much a given that Ox would arrive first thanks to his great strength and the stride of his mighty steps. However, Rat, who was one of the smaller animals, asked Ox for a ride, to which Ox obliged, for Ox was strong and also kind. Rat enjoyed the ride, but Rat was a bit of a trickster, and just as Ox was about to enter the palace, Rat jumped off Ox and entered the palace first. This is why Rat is the first of the animals of the Chinese zodiac, and why Ox is second, ahead of the tiger, the rabbit, the dragon, the snake, the horse, the goat, the monkey, the rooster, the dog, and the pig. But this year is Ox’s year, and the element associated with Ox this year is metal.

And though the year is Ox’s, the new year celebration kicks off now and runs for sixteen days, through Lantern Festival, when the full moon returns and the celebration concludes.

We have two things to offer you through the Jaffe Center for Book Arts to mark the new year celebration. First, a virtual workshop with the amazing paper engineer Colette Fu, called “Year of the Metal Ox Pop-Up Cards.” It’s on Thursday, February 18, from 6 to 8 PM Eastern, via Zoom. In the workshop, Colette will teach you how to make three different pop-up cards for the new year; in addition to making the cards with you, she’ll explain the mechanics behind each so you can do some paper engineering of your own. Tuition for the workshop is self-determined, which means you decide how much your tuition is (JCBA suggests $65 for this workshop). And when I say Colette is an amazing paper engineer, I mean it: she created the world’s largest pop-up book in 2017; it measures 21 feet x 14 feet, and you can walk through it. I tried to bring it to the Jaffe Center for Book Arts last year, but we discovered there were no building entrances large enough for it. 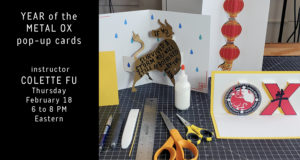 The other new year event is the Jaffe Center’s virtual Real Mail Fridays Year of the Metal Ox Worldwide Letter Writing Social the very next day, on Friday, February 19, from 2 to 5 PM Eastern, also via Zoom, and it’s free. What to expect? We’ll be celebrating the Year of the Metal Ox through An Dun (music to calm the emotions) and Sheng Hua (music to invigorate the spirit). We play the music, people gather over Zoom, and it’s three hours of calm working time to do whatever you wish: write letters, knit, bind books, do homework, paint or draw. What you do is up to you. We just provide you with atmosphere and the company of like-minded folks, and once or twice an hour we break for a little chat. 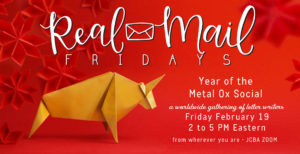 We’ve been holding virtual Real Mail Fridays since December, and they are such heartwarming gatherings. I just glow brighter and brighter with the gifts of human kindness with each social we hold. And it’s just awfully nice to connect.

Click the pictures to make them larger: The top photo is of the new Year of the Ox postage stamp from the US Postal Service; the crowns are foil printed! The middle one is the slide for Colette Fu’s workshop, and the bottom one is the slide for the Real Mail Fridays social.

Woof! It’s the Year of the Dog

Welcome to the Year of the Dog: Chinese Lunar New Year begins today. It’s the most important holiday of the year in the Chinese tradition. The new year is a long celebration that begins with a reunion meal on New Year’s Eve (that was last night, the 15th of February) and runs this year through to the 2nd of March, which is Lantern Festival. There are traditions for each of the days in between, traditions which vary across cultures within China. But certain things are common throughout the new year festival: the color red, an astonishing amount of exploding fireworks, gifts of money in red envelopes, and an abundance of good food.

As for Dogs (at least in terms of people born in Dog years), it is believed that they share some general characteristics. They make great friends, and are always ready to lend a hand. They are very loyal, not just to friends, but to family and work, as well. They are honest and just. They are often popular, despite a healthy dose of worry and anxiety that they hide from others. Be that as it may, they are resolute, and can typically overcome their worries once they decide to do something. Dogs are very compatible with Rabbits, Tigers, and Horses. Oxen and Goats, not so much. Dragons, like me, clash strongly with Dogs. Neither trusts each other and intense arguments are likely (apparently, I’ve never met a Dog). There are five elements associated with the years of the Chinese Zodiac––Metal, Water, Wood, Fire, and Earth. This year is the year of the Earth Dog, the first time since 1958. 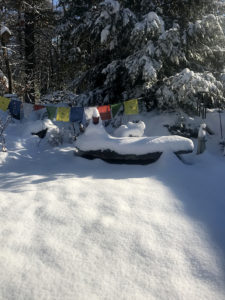 Besides being Chinese New Year, it is also Losar, the Tibetan New Year festival. Seth’s parents are Buddhist. For Losar, they have cleaned the house and cleaned the shrine room. The cleaning is part of the preparation for the new year, especially in the kitchen, where special foods are made for the celebration, much like they are for Chinese New Year. This is, as well, a time to visit friends and relatives and to buy new clothes, settle debts, and resolve disputes. The prayer flags are replaced at Losar, too, with new prayer flags that will flutter in the wind… but my in-laws are in Maine, and Doreen says it’s too snowy to get out there to change the flags. We need to be practical about things, after all. The old prayer flags still are prayers, still just as beautiful in all that snowy pine forest. If it was up to me, I’d wait to change the flags, too. Once Lunar New Year is here, spring, we know, can’t be all that far away.

A F T E R W O R D
Sometimes, as the events of a day unfold, the things I write about seem terribly unimportant. Really. I write about food and booze and the proper time to take down your Christmas tree. But this is what I do, and so I do it. I began writing this chapter about Chinese Lunar New Year at 3 in the afternoon on Wednesday, Valentine’s Day. I was having two new tires put on the car, so I sat on the sidewalk outside the tire shop and I got to work. Between the time I began and the time I had finished the first paragraph, a kid with a semi-automatic weapon took 17 lives in a high school in the neighboring county. This is not the way things are supposed to be.

In 1982, I graduated from Deerfield Beach High School, 14 miles due east from Marjory Stoneman Douglas High School. My niece went to Marjory Stoneman Douglas in the mid aughts. I worried about a lot of things in high school, and I’m sure Stephanie did, too, but neither of us ever worried that we might be shot in school. A lot has changed since then and much of it makes little sense. We have brought this terror upon ourselves and worse, upon our children, and they suffer through our debate. I suspect nothing will be done, not by us, not now. We are, sadly, entrenched in a period in this country of neither reason nor hope, and there seems little chance of the discord being bridged. My hope, though, is that our kids will have the spine to do what we will not.

Top image: A dragon puppet that we stumbled upon at this year’s South Florida Fair at the Palm Beach County Fairgrounds west of West Palm Beach. It is a Dog Year, but dragons are common symbols of the new year, and this dragon wound up being the cover star of our Convivio Book of Days Calendar for February this year.