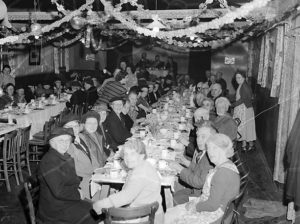 Here we come to what is perhaps Seth Thompson’s least favorite night of the year: New Year’s Eve. “Too much pressure,” he says.”Everything hinges on one precise moment.” And so each year I deal with this. But if there is one thing I really love about New Year’s Eve, it’s the zeppole. These are different from the zeppole we buy for St. Joseph’s Day in March; New Year’s Eve zeppole are kind of a fried doughnut––a yeast dough, much like pizza dough, but enriched with eggs. Mom will make the dough and let it raise and sometimes it will bubble up over the sides of the bowl it’s proofing in and then she’ll spoon the dough into hot oil, stretching the dough as it slides into the fat. The result is a light, fried treat that comes in all sorts of shapes that remind you of all sorts of things as you eat them, whether they be drizzled in honey or dusted in powdered sugar or cinnamon sugar.

The zeppole are all we really need in my family for a fine New Year’s Eve, but our tradition is to make all kinds of party foods: pigs in the blanket, glazed meatballs, spinach & artichoke dip, things like that. I did try once or twice to get my family to eat lentils for New Year’s Eve dinner, but I’ve always been met with stiff resistance. Grandma Cutrone, however, would make a pot of lentils, and would come round to whoever was gathered at her home at midnight on New Year’s Eve to offer them a spoonful: Lentils for wealth in the new year, the lentils symbolizing coins and riches.

Hogmanay and First Footing refer to the New Year’s traditions of Scotland, where the new year celebration is the biggest part of the Yuletide season. The celebration there is known as Hogmanay, which is believed to to be derived from the French au gui menez, “lead to the mistletoe,” and this suggests a very ancient and pre-Christian derivation of most Hogmanay traditions, for it leads directly back to the Celtic druids and the mistletoe that was sacred to their ceremonies. First Footing is an aspect of Hogmanay that feels particularly like a magic spell: The first person to step across the threshold of the front doorway after midnight is this First Footer, and it is hoped that this person would be a red- or dark-haired man carrying whisky or mistletoe or, in some cases, bread, salt and coal. In this case he would kiss all the women and shake the hands of all the men before placing the coal on the fire and the bread and salt on the table and then he’d kiss all the women and shake hands with all the men once more on his way out.

New Year’s symbolism is potent magic, and New Year’s Eve is perhaps the most common night of the year for symbolic foods and rituals. If you have some that are part of your traditions, I’d be honored if you shared them here in the comments section. It’s easy to do so and it helps us all to learn, so please join in and help make this a conversation. Between your input and mine, maybe we can help Seth see that New Year’s Eve is not so bad, after all.

There Was a Pig Went Out to Dig, Again 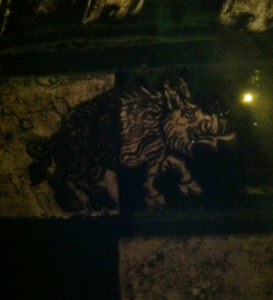 FIFTH DAY of CHRISTMAS:
Bring in the Boar

It’s been an incredibly busy Christmas week for us, and yesterday, as Seth and I were driving home through Downtown Lake Worth from some errand or other, we passed by a house that had a rather large animal grazing in the front yard garden beds. I did a double take because at first sight I thought it was a small bear. But we both came to the realization a moment later that it was, in fact, a big pig. It was the first time either of us had seen a pig that size in Lake Worth, but we were not terribly surprised, for our longtime motto has been “Keep Lake Worth Quirky,” and the sight of a big bristly pig grazing unattended in a front yard is just part of what makes Lake Worth, well… Lake Worth.

The timing was spot on for our first urban pig sighting, for today, this Fifth Day of Christmas, is all about the boar, which is a pretty much just a wild version of the domesticated pig. The boar has also got a deep connection to Convivio Bookworks. Please read on to learn more; it’s all in this reprint of last year’s Convivio Book of Days chapter for the Fifth Day of Christmas, which I don’t think I can improve upon this year… so enjoy all of you: “Quot estis in Convivio!”

On this Fifth Day of Christmas, tradition for an old English Christmas would have us focus on feasting. In particular, we would “bring in the boar.” We tend to remind you here at the Convivio Book of Days blog each Fifth Day of Christmas about the Boar’s Head Carol… mainly because our Convivio Bookworks name comes from that same carol. It is an ancient carol that comes out of Queen’s College, Oxford. As the story goes, a young student of the university many centuries ago was out in the surrounding woods when he was charged by a wild boar. The student saved himself with the only weapon he had upon him: a dusty old volume of Aristotle, which he shoved down the throat of the charging beast and which did the beast in. He then brought the boar’s head back to the college and had it for dinner… with the fanfare of this carol:

The Boar’s head in hand bear I
Bedecked with bays and rosemary
And I pray you, my masters, be merry
Quot estis in convivio! [So many as are at the feast!]

The Boar’s head, as I understand,
Is the rarest dish in all the land
When thus bedecked with a gay garland
Let us servire cantico! [Serve with a song!]

Our steward hath provided this
In honor of the King of bliss,
Which on this day to be served is.
In Reginensi atrio! [In the Queen’s Hall!]

We have never served a boar’s head and don’t ever plan on doing so, but we have served other feasts during Christmases past. It is appropriate, I think, to sing the boar’s head song while serving up any great feast… you might just change the words a bit. (“The crown roast in hand bear I,” for instance, works really well.)

Aside from the Queen’s College story and our old Boar’s Head Carol, there are other associations between the boar and these darkest nights of midwinter. Pigs were especially sacred to the Celts, for they provided the winter’s meat and the belief was that pigs were a gift from the underworld. And in the Scandinavian countries, Frey, the sun god, rode across the sky on a boar with golden bristles that shone like rays of the sun.

There is, as well, a fun old carol that is sung by the Revels children’s chorus. It’s all about animals, but it begins with a pig. Seth and I were singing it just last night, in fact. I don’t even know why. Perhaps it is just the persistence of memory and the timely reminder that the focus for this next day of Christmas would be on the boar.

And so on it goes with crows and sheep and drakes and minnows. But it is the pig this Fifth Day of Christmas that steals the show. Whatever your feast may be this day, I pray you, my masters, be merry, quot estis in convivio!

Image: Seth discovered this image of a wild boar depicted in one of the stained glass windows at Bethesda by the Sea Episcopal Church on Palm Beach. We don’t go there very often, but we do make it one of our stops on our annual Maundy Thursday pilgrimage to three churches. Each year we visit this boar, like an old bristly friend. 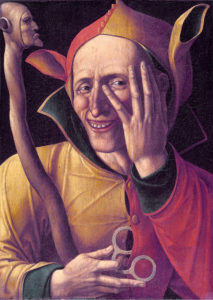 FOURTH DAY of CHRISTMAS:
The Feast of Fools

On this Fourth Day of Christmas, the normal order of things is ceremoniously reversed. It is the Feast of Fools. There are many who would say that this is the normal order of things lately, and I’d have a hard time disagreeing with them. But hopefully your home is in a better state than the world at large, and for today’s Feast of Fools, you might put the children in charge of things. Let them decide what the day’s activities are, let them decide what’s for dinner. Allow yourself to be a little foolish for the day. There’s no harm in that.

The Feast of Fools traditions descend directly from the Roman midwinter festival of Saturnalia that informs most of our Christmas traditions. They come out of chaos and entropy: the chaos of the old year dying, unraveling at the seams. A new year is about to be born. As the year goes, so have gone other things through this Yuletide: the sun must die at the solstice to rise again, the son born at Christmas must die to rise again at Easter. The story is an ancient one, told over and over again, in many guises. The story never grows old, and it is the story even of our Convivio Book of Days: it is the wheel of the year, turning always, renewing always. The times and players change and yet the story is essentially the same. It is, to me, both comforting and perplexing. And if today it helps us all to laugh at our ways, all the better.

Image: “The Laughing Jester” by an anonymous painter, c. 15th century, Netherlands. Located at the Art Museum of Stockholm [Public domain] via Wikimedia Commons. At the Feast of Fools in olden times, the jester would rule the Court and could speak truths without repercussion, truths that no one else would dare say out loud.