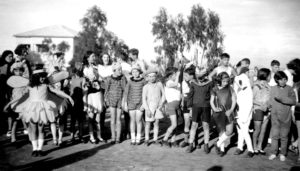 When it is Purim, I think of my friends Georges Banet and Judith Klau, who introduced me to the holiday years ago one Purim with a mitzvah, a good deed. They brought me a Purim box that contained two hamantaschen, pastries in the shape of a triangular hat, filled with all manner of deliciousness (the ones they brought me were prune-filled and poppyseed-filled). The printed box explained the story of Purim, which essentially is this: In ancient Persia, Haman, the royal vizier to the king, plotted to kill all the Jews in the empire, but his plot was discovered and foiled by Queen Esther and her father, Mordecai. It’s a story from the Book of Esther.

Each year at Purim, the story is retold in the reading of the Megillah, and each time the name Haman is spoken, the congregation boos and hisses and twirls graggers to drown it out. The pastries are meant to evoke Haman’s hat. And then there are costumes! Purim is a bit like Halloween in springtime: kids dress up in costumes for the day and great parties ensue. The costumes traditionally call to mind the characters of the story, but don’t be surprised to see all kinds of costumes on Purim, which begins this year with the setting sun tonight, this last day of February. Gragger away!

Image: A 1951 photograph of elementary school students in costumes for the Purim parade at the Hebrew Reali School in Haifa. [Public domain] via Wikimedia Commons. I love the fairy on the left. 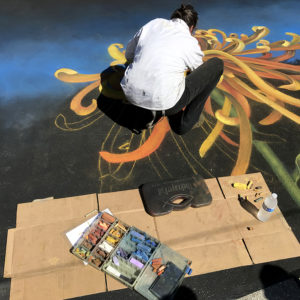 It’s Monday morning here in Lake Worth. I’ve taken the day off from work to bind books and to get started on taxes. The day started bright and sunny, but just now, a heavy downpour is falling from the sky, falling on the roof, falling all around me, falling on the streets of Downtown Lake Worth, where this past weekend it was our annual Street Painting Festival. It is the largest street painting festival in the country, and this year was our 24th annual. At the information booth that was smack in the middle of Lucerne Avenue, closed to traffic for the weekend, was a board of FAQs. The first one: “What happens if it rains?” The answer: “The paintings get wet.”

It is a beautiful lesson in the ephemeral nature of things, the Lake Worth Street Painting Festival. Each year we have all this beauty bestowed upon us by artists painting with chalk on our streets, and once the festival is over, the roads are reopened to traffic, and of course you never know when the first rain will come, but it always does. Sometimes very quickly, or sometimes more gradually, all of it––the chalk transformed into paintings––it all vanishes.

We spent Saturday afternoon, my mom and sister and Seth and I, saying good bye to an old family friend at a funeral that was attended by hundreds and maybe thousands of people. I could not tell. All I know is Father Alonso’s funeral was standing room only at what used to be our neighborhood church when we lived in Lighthouse Point, Florida. We stood against the stained glass windows and even my mom, 91 years old, stood through the whole thing. The crowds were a testament to how loved this man was. My grandma loved him because Father Alonso, who was sent to the States by his Piarist mission in Spain, spoke so slowly. One day she went up to him and told him, in her broken English, “I like you. You, I understand. The others, they talk too fast.” He loved calling her by her name, Assunta, a name he understood, too, because Italian and Spanish are so similar. He knew she was named for the Feast of the Assumption. After Grandma died in 1987, Father Alonso began calling my mother Assunta, just because. Even to the last time we saw him, when he made a special trip to see us at my father’s wake last year, he came into the room and saw my mother and said, “Assunta.” He was the kindest man. He did not judge. He radiated joy and compassion and would hold his hands out when he saw you, always welcoming.

He called the boys chicos and the girls chicas and he told them all to be nice to the Old Man, which was him, even decades ago when he certainly was not an old man. He was barely an old man when he died last week; only 77. We learnt at his funeral from his fellow Piarists that Father Alonso would have celebrated 50 years in the priesthood, but wanted nothing to do with any celebration of that fact, for it did not matter to him, and he did not want to call attention to it. He lived humbly. As it turns out, he went to sleep the night before that golden jubilee day and died peacefully in his sleep. We kept hearing at the funeral that God’s ways are not our ways and when it came to Father Alonso, this was certainly true. He was so many things to so many people, and this was clear by the vast number of us celebrating his life… which is exactly what Saturday felt like to all of us, no matter if we spoke Spanish or English (or, if my Grandma had been there, a mix of Italian and the language of our adopted country). 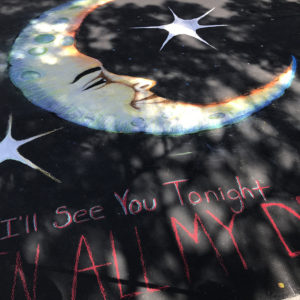 When I lived with my family in the old family homestead, our neighbor was a retired New York cop, also of Italian descent, named Tony. Tony was loud and animated and he had a saying that no doubt reflected his experience growing up in a home with Italian immigrants, for part of it was in Italian and part in English: “Quando suona la trumpet,” he would say, as he picked his arms up to the sky. Proper Italian would be Quando suona la tromba… basically, “When the trumpet sounds…” When the trumpet sounds, that’s it, it’s our time to go. I thought about that a lot this past week whenever I thought of Father Alonso, who left us too quickly, and I thought about it this morning when the rain began falling in Lake Worth. I think about it when I am mowing the lawn at my family’s home, because I always think of my Dad when I am doing that task that we so often did together, and I think of Tony sometimes, too, because that’s usually when Dad and I would see Tony, out puttering about his yard, too. The best we can do is to do the best we can: paint good paintings, tell good stories, be kind to each other. It’s all ephemeral, but we do it anyway.

Some have Entertained Angels Unawares 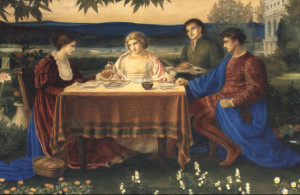 Welcome to Concordia. It is a feast day of the Ancient Roman calendar falling on the 22nd of February, in which folks reconciled their differences over a good meal. That’s it, pure and simple: A gathering around the table with the purpose of breaking bread and sharing wine in order to make amends and to settle all disputes that cause discord. Harmony is the goal.

I’ve used this image before, but tonight, for some reason, it strikes me as particularly poignant. It’s a watercolor by Edward Clifford, and I’ve named today’s Book of Days post after it, for I love the painting and the idea behind it. You never know who you’re talking to… so why not strive for harmony as often as possible?