Easter from King’s (and from St. Bernard’s) 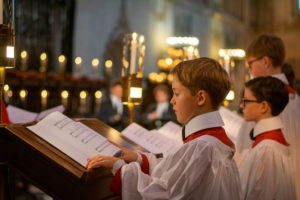 On this second consecutive Easter spent keeping our distance from others, Seth and I, we traveled via Britbox on Holy Saturday Night for an Easter Vigil of our own through a BBC program called Easter from King’s, the King’s being King’s Chapel, Cambridge. Kind of like the Nine Lessons and Carols each Christmas from King’s Chapel, only this is Easter, and this program takes us through Holy Week, ending in the triumph of Easter Sunday.

I got to hear the Pange Lingua, but in English, which is not the same as hearing it or singing it in Latin (especially when it comes to the “genitore, genitoque” part). And still the song I expected to hear never came. Can you guess the one? It is “Jesus Christ is Risen Today,” the grand centuries-old hymn we hear at almost every traditional Easter service, usually at the end, to close the Mass. It had its heyday in the 1700s, when it was translated into English, but remains to this day perhaps the most recognized hymn of Easter… and perhaps that was its downfall tonight––maybe it was just too pedestrian for Easter from King’s.

Be that as it may, our Lenten journey is over and Eastertide is here. And while I never got “Jesus Christ is Risen Today” from the choristers at King’s Chapel, I do come bearing an Easter gift of my own that does deliver the hymn, in its own way: It’s a Convivio Dispatch from Lake Worth from a few years back, one of our most popular Dispatches ever. The scene is Easter Vigil Mass on Holy Saturday Night––one of the most beautiful ceremonies you’ll witness, to be sure, but a marathon event and a true test of stamina, not for the weak of spirit or of strength. Father Seamus was there, as was Sister Kathleen, the Reluctant Organist. And I was there, too. And when you’re done reading the Dispatch, watch the clip of the choristers at King’s Chapel below it. Their singing is a thing of beauty, and it is easy to imagine oneself somewhat closer to God through their collective voice. Happy Easter.

It’s Holy Saturday, the night that officially closes the somber and reflective week known as Holy Week. We Catholics cap it off with the hours-long Easter Vigil Mass, a test of will for anyone, to be sure. But it is this Mass that is the high point of the liturgical year, a grand spectacle to usher in the miracle of Easter.

Tonight’s long Easter Vigil Mass at St. Bernard’s lacked a little something, though, and the general sense was that this year’s transition from Darkness to Light, from Somber to Joy, from Death to Life, was not quite as dramatic as it was in years past. And we can all pretty much place this sense of inadequacy on the statue of the Risen Lord at the back of the church. The concept each year is the same: We begin after sunset in a dark chuch, and once the good news is proclaimed, the lights and the organ grow gradually brighter and louder, while the bells ring triumphantly, as all the marble statues are released from the purple shrouds that have covered them since Holy Thursday.

But the statue of the Risen Lord, which hangs some four feet above the doorway opposite the altar, is perhaps better known amongst the congregation as the Statue That Fell Upon the Head of the Usher, which happened as the unfortunate man was using a pole to release it from its purple shroud on another Easter Vigil night, three or four years ago. It’s happened just that one time, but still, the ushers grow increasingly timid with each passing year, and what used to be done with great zeal and flourish is now done rather gingerly and with palpable fear. The lights are all on and Sister Kathleen, the reluctant organist, has gone well past crescendo and so has no choice but to settle into quiet notes––notes that feel a bit like they’ve worn their welcome––and Father Seamus watches and prays from the altar, and the congregation turns and winces and looks away because they don’t want to watch what’s happening with the pole and the purple cloth but they turn again to watch anyway, lest they miss what might happen if it happens, and there is more wincing, and then finally one usher goes in for a folding chair, one of the chairs behind the back pew for the potential overflow Easter crowd. He gets the chair to stand on it, so as to have more control over the situation, or perhaps to lessen the blow should the statue fall again by reducing the distance and velocity it would travel downward toward his head––but then he hesitates, too, and Sister Kathleen by now just flat out stops playing as the air grows heavier and heavier. Finally the other ushers just gather together and go for it in a great show of Christian strength and solidarity. They push the pole up under the purple cloak and lift it from the head of Christ and the statue rocks back and forth on its hook and there is, from somewhere in the pews, an audible gasp.

But the statue of the Risen Lord settles down again, and all is well for another year, no ushers are in need of stitches, none have been clobbered into unconsciousness.