Here’s a story I wrote many years ago, when I had aspirations to be a different sort of writer than the one I became. The memory of it popped into my head on Saturday as I was raking hay in the garden, and later I found the typed manuscript pasted into a journal from 1993. Ann Peyton, my teacher, thought it was ok back then, and I read it on Holy Saturday night these 26 years later and thought, well, a little polishing up and it might be even better. Here it is. Happy Easter. –– John 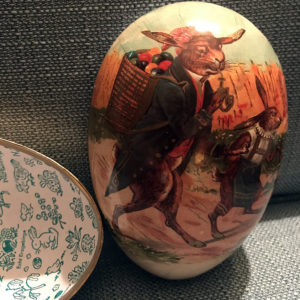 On the morning of Easter Sunday, there is an egg hunt on the grounds of St. Bernard’s. It is an annual event, always directly after the 9 AM mass: screaming children scurrying, adults on the sidelines, Father Fred directing and guiding, his black vestments down to his black shoes, floating above the green grass.

This year, before mass is over, and after the Egg Hunt Committee of the St. Bernard’s Women’s Club has all the eggs hidden––some in easy plain-as-day flat-out-middle-of-the-lawn spots, others in more difficult spots (like the purple one hidden inside the bottom of a rain gutter)––well, somewhere in the midst of this a raccoon comes on the scene, steals a yellow egg from the exposed roots of a large banyan tree, shimmies beneath the shrubbery and devours his prize. This is true. I saw it happen.

He wore a blue jacket. Large brass buttons. Nothing else, of course. Maybe it’s the tail situation––I couldn’t tell you, really––but animals never wear trousers. Not in stories like this, anyway.

So this raccoon eats this stolen yellow egg, taking great care not to spoil his blue jacket, and he is amazed to see, out of the corner of his eye, another egg, a bluish-green color, right there beside him under the shrubbery.

“No way!” he says, and he swaggers up to it and devours this one, as well. He belches once or twice and rolls onto his back in that delightful sated feeling that comes after a good meal. He is contemplating sleep, rolling to his side. There is another yellow egg ahead of him on the grass. His eyes widen. He jumps to his feet, runs and grabs the yellow egg, thinks, “I will save this for later,” then scurries toward the wood past the sanctuary of Mary, Mother of God.

There is a red egg at her feet and this raccoon, he cannot believe his incredible good fortune. He drops the yellow egg, takes the red one instead, and runs for the wood. His belly aches a little but he runs anyway with his red egg and blue jacket with brass buttons. He jumps into a rotted old tree. Home.

“You guys! You will not believe this. Look!” He shows the other raccoons in the rotted old tree the red egg. “It’s like, raining eggs out there. They’re everywhere! Hundreds, maybe thousands! Eggs just… everywhere! Yellow ones blue ones red ones, green ones, too! And they are…” (he sucks in some air) “…everywhere.”

Naturally, this news gets all the other raccoons pretty worked up and soon there’s a clamor going through the rotted old tree and through the whole neighborhood: raccoons jumping out of morning naps, scurrying into jackets and overcoats and running outside to see this great event: colored eggs falling from the sky. They process through the wood and toward the grounds of St. Bernard’s.

Now, at about the time that the raccoon in the blue jacket with brass buttons had picked up the red egg at the foot of Mary, Mother of God, Father Fred was blessing the congregation and saying, “The mass is over. Go in peace to love and serve the Lord.” And the congregation said, “Thanks be to God,” and the organist began a triumphant tune and the children were suddenly reborn and they jumped up and grabbed their baskets and took moms and dads by the hands and ran to the church lawn. And Father Fred took his place at the center of the lawn with his black shoes sunken in the green grass and his black vestments floating above them. He yelled GO! and the screaming children blasted out from all sides. They dove and slid and colored eggs were scooped up right and left up and down here and there and the whole thing was over in seconds. The colored eggs at the grounds of St. Bernard’s were gone in three blinks of an eye. Father Fred gave jelly beans to the children and the ones he liked got pats on the head, as well. Then the congregation rushed off, saying “Happy Easter,” “Goodbye,” “Dinner’s at 4,” and Father Fred went back to the church to prepare for the mass at noon.

The grounds of St. Bernard’s were deserted when the entourage of jacketed raccoons arrived to delve into the multitude of colored eggs that been sent from on high. They burst from the wood smacking their lips and sniffing the air and dusting the sleeves of their jackets. They looked around, expecting piles of blue eggs, yellow eggs, red eggs and green ones, too. But there were none.

The raccoon in the blue jacket with the brass buttons was in a panic. “I… I don’t understand. I ate two eggs, I did. I found them here, in the grass. I even left one––a yellow one––here, by the pretty stone lady.”

The other raccoons grumbled amongst themselves. They were rather upset and raccoons don’t hesitate to show their displeasure, you know. They were grumbling and turning away, hissing at the poor little fellow and making obscene gestures as they passed. And the raccoon with the blue jacket and brass buttons was left alone at the foot of Mary, Mother of God, sobbing and quite shaken. He was very embarrassed. I know. I saw the whole thing. I would have been embarrassed, too.

But don’t feel bad. Raccoons are resilient creatures. As it turns out, he’s found the purple egg that was hidden at the bottom of the rain gutter. I never would have thought to look there and apparently none of those children thought of it, either. But the raccoon with the blue jacket and brass buttons has found it. He devours it, taking care not to spoil his jacket. Then he scurries off, into the wood.

Image: Even bunnies wear blue jackets with brass buttons. This is one of the handmade paper eggs from Germany that we sell at the Convivio Book of Days Catalog. Happy Easter!

Good Companions, and Your April Book of Days 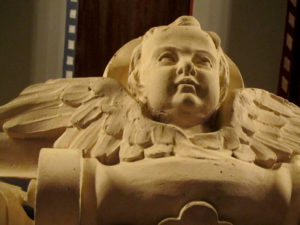 Easter brought in April this year. In my family, Easter is one of those holidays that requires days of preparation followed by a good six or seven hours at the table. It begins with the felatta, a traditional platter of cured meats and cheeses and thick fresh orange slices, baskets of two different kinds of homemade taralli (Grandma Cutrone’s and Grandma DeLuca’s), pizza rustica––a savory pie of meats and cheeses and eggs, and dishes of fresh local mozzarella and ricotta. There are the hard boiled eggs, brightly colored, and we have egg fights with them to see whose eggs remain uncracked when they are pitted against each other, tip to tip and butt to butt… and so there are lots of eggs to eat, too. This alone goes on for a good hour and change. And this is just the first course.

So forgive me, I didn’t get to the April edition of your monthly Convivio Book of Days calendar until today, Easter Monday. Which, yes, is a national holiday in many fine countries (like Italy, France, Germany, Canada, and Iceland), mostly in Europe, Africa, and the Caribbean. I didn’t include Easter Monday on the calendar, but you will find a few interesting days, mostly toward the end of the month, as well as a real favorite day for many of you: Våffeldagen, or Waffle Day––a more populist name for the Feast of the Annunciation (known yet again as Lady Day). It’s typically on the 25th of March, but in years when the feast falls on Palm Sunday (as it did this year), Palm Sunday takes precedence and Lady Day is moved to the Monday after the Second Sunday of Easter. Which this year happens to be April 9th… so plan now on eating waffles that day.

Your best bet? Print out the April Convivio Book of Days (it’s a PDF, after all, designed to be printed on standard US Letter paper), pin it to your bulletin board, and use it as a companion to the blog (and as a good reminder to enjoy waffles on April 9). This month’s cover star is rather angelic, and that’s a good companion to have, as well. Enjoy. 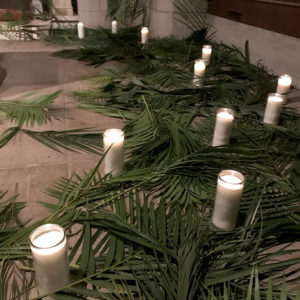 I’ve been off from work this past week, and it was a wise move, taking off for Holy Week. The days were spent on projects and in preparation. I got to spend time with Seth and with the cat as I finished binding a book that someone had ordered and got to work in earnest once more on the book proposal for the Convivio Book of Days. I started fresh, fresh like spring, and I feel better about the proposal I’ve begun this week, much better than the one I began last fall. My friend Cricket gave me a bag of coffee as inspiration for my writing, and all that’s left is enough for one cup: the cup of coffee I will have when I send her the finished proposal.

We also got to help my mom and sister with Easter baking and we got to go on our annual Holy Thursday night pilgrimage of three churches. It was Seth and me on that pilgrimage and we were out late into the moonlit night. So beautiful. And this year I got to do something I had never done before: I went to church for Good Friday. And that was fine, church was. But the sermon made me uncomfortable and I felt a bit disconnected, until it was all over, when we all left the old church in silence, as we are to do on Good Friday. But as we left, I could hear the sounds of the Creole choir, also from our church. The Creole congregation were in the midst of the Stations of the Cross, outdoors on the sidewalk in front of the older church building, the one from the late 1800s. Their music drew me in and I gathered round the old church with them, leaning up against a live oak tree. They were at the final station. There was wailing and sorrow and there was singing I had never heard before but which sounded so familiar. They made their way then to the main church, the larger, newer one, the one built in 1913. They entered, singing, and I went on my way, content, happier for having run into this extension of myself.

Saturday night, I’ll be back, for the Easter Vigil. It is the hours-long Mass that brings in Eastertide. It can begin only after darkness has fallen, for it is then the third day, which used to confuse me a lot until I realized that different cultures have different ways of reckoning time. No one way is right, for time is such a fluid thing and yet an invention of our making. It will be the beginning of Easter and the second night of Passover, too. We will be there, sitting, standing, kneeling, singing, praying, in a service that will begin in darkness and end in light––a central theme to the Easter Vigil. A fire is kindled and the one light is the source that illuminates all the candles in the church: the candles on the altar, the candles we hold cupped in our hands. We are reminded that light overcomes darkness. We are invited to be that light.