A Reverie on Eggnog 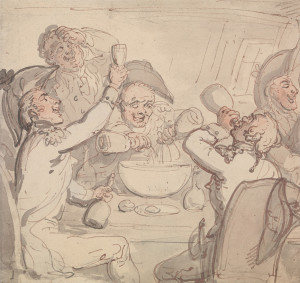 In the Spring of 2021, I took an online month-long course in Food Writing with author Nicholas Gill. My favorite of the pieces I wrote for the class was this reverie on eggnog (and zabaglione) that I wrote just before San Jacinto’s Day, the 21st of April. I published it on the blog soon after. Here we are once again at San Jacinto’s Day; the essay seems just as good this year. And now I want some eggnog. Enjoy! –– John

We Italians have a delicious dessert (imagine that!) that we enjoy throughout the year and which tastes for all the world like the best eggnog you’ve ever had. You may have had it, as it is nothing terribly unusual; we call it zabaglione. At its most traditional, it’s a custard, but set foot in any good gelato shop on a hot summer day and you’re likely to find zabaglione there, too, as a gelato flavor. And like any great centuries-old dessert, it has its origin story. Actually, origin stories. There are many. But the one I like best comes from the region of Emilia-Romagna, where in the late 1400s, the mercenary Condottiere Giovanni Baglione, after a day of pillaging the countryside, is said to have sent his troops foraging for ingredients for a meal. Their takings were meager: they came back with eggs, honey, white wine, and some spices. We might assume that the commander then prepared an egg white frittata for his troops, for he saved the honey, the wine, and the yolks of the eggs to prepare dessert, which he whipped up––perhaps with a fork, perhaps with his saber––and flavored with nutmeg, et voilà: the now famous custard was born. His men were so elated with the result, they named it after their condottiere: Zabaglione!

The custard itself is delicious, and the story: not half bad. Whether it is true or just the stuff of legend, I cannot tell you. Be that as it may, I think of zabaglione each year around the 21st of April, for it is San Jacinto’s Day, and David Wondrich, in his spirited book Imbibe!, tells us a story for the day that involves a recipe with similar flavors but featuring another commander in a military adventure on a different continent. The scene is Mexico, or possibly Texas, or maybe it’s no matter for Texas was once part of Mexico so let’s just call it Mexico, shall we?

The story revolves around eggnog, the old time Christmas drink that became such a distinct part of American Christmas culinary tradition once the recipe reached this side of the Atlantic from Britain. The rich concoction of eggs beaten to a froth with sugar, then added to milk and spirits and topped with freshly-ground nutmeg, was first mentioned in a Philadelphia newspaper in 1788. That’s a solid three hundred years after our Condottiere’s supposed invention of zabaglione, but certainly folks were drinking eggnog well ahead of its debut newspaper mention. Wondrich’s tale revolves around what is perhaps the most famous non-Yuletide celebration involving eggnog (and this does not necessarily mean you know about it): it was on San Jacinto’s Day, 1843.

So, we remember the Alamo, of course, and in Texas they remember the Battle of San Jacinto, which took place a few months later on San Jacinto’s Day, April 21, 1836: It was the decisive 18-minute battle that won independence from Mexico for the Republic of Texas (so, perhaps, let’s go back to calling it Texas). But tensions on the border remained high between Texas and Mexico, exasperated by numerous Mexican raids over the years on Texian territory. The response by the fledgling republic, six years later in November of 1842, was the ill-fated Mier Expedition, an invasion of Mexico by Texian troops. Things for the Texians did not go very well, and about 160 soldiers of the Army of the Texas Republic quickly found themselves held prisoners of war at the Fortaleza de San Carlos by the Mexican General Santa Ana (also of Alamo fame).

They say everyone’s got their price… and the following April, to mark the seventh anniversary of the Battle of San Jacinto, the Texian prisoners were successful in bribing their Mexican captors into smuggling in for them all the necessary fixings for a celebratory eggnog. The milk came not from a cow but from a donkey (leche de burra), and the spirits were not rum or whisky or brandy but mezcal. Then, as now, the best of us work with what we’ve got.

Texian General Thomas Green, recollecting the event two years later in his Journal of the Texian Expedition Against Mier, writes that with thanks to their Mexican collaborators, his men were able to get their hands on “seven gallons of vino mascal, and as many of ass’s milk, thirty dozen eggs, [and] a large loaf of sugar.” Add to that list an assortment of accoutrements smuggled in from the prison kitchen, with General Green himself supervising the production while three of his officers beat the eggs and another pounded the sugar, as another of his men stood by singing old songs like “Long, Long Ago” and “The Soldier’s Tear.” The resulting beverage, Green writes, was “such egg-nog as never before was seen or drank under the nineteenth degree of north latitude.” Green’s men filled their cups, the mezcal warming their spirits as the leche de burra filled their bellies, and they sang more heartfelt songs that night. General Green makes special mention of the Thomas Moore song “Will You Come to the Bower?” –– perhaps the one most poignant as the men raised their cups and missed their Texas homeland and the wives that awaited their return.

It was, we might add, nowhere near Christmas. And still to this day the 21st of April, San Jacinto’s Day, is a state holiday in Texas, though I suspect very few make eggnog to celebrate. Perhaps we should. I, for one, am all for more eggnog days in our wheel of the year, and a bit more zabaglione, too. A few more poignant songs to grip the heart? I am all for that, as well.

David Wondrich, for his part, offers the following recipe for a proper Texian eggnog for San Jacinto’s Day: he begins by shrinking the recipe down to one that starts with one bottle of good mezcal (rather than 7 gallons of the stuff). Then there are 3 cups of milk (cow’s milk will do), 10 eggs, and one cup of sugar. First, separate the eggs, beating the yolks with the sugar until creamy, then beating the whites separately until stiff peaks form. If you can, have someone nearby, singing a sad song (my addition). Stir the booze into the yolks; follow up by folding the whites into the mixture. Stir the milk in slowly, then chill for two or three hours to allow the flavors to meld.

2 thoughts on “A Reverie on Eggnog”