Leave a comment
Advent, Christmas, Day of the Dead

A Sale Instead of a Street Fair 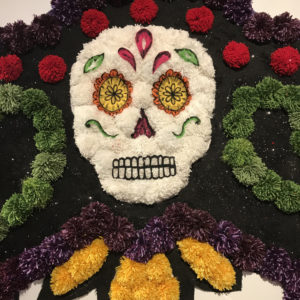 We’re approaching Hallowe’en and soon after, Dia de Muertos, Day of the Dead. It is the time of year when we traditionally remember those who have gone before. Normally, you’ll find us at two very big events in South Florida around now, as we set up shop at the street fairs for Dia de Muertos Lake Worth and Florida Day of the Dead in Fort Lauderdale. Both celebrations are such great fun and such beautiful events that bring our community together. This year, due to social distancing, these gatherings won’t be happening… so instead of finding our artisan goods at a street fair, we thought we’d offer you a sale, instead. It’s an opportunity for you to stock up on all you might need for Dia de Muertos and Advent and Christmas, too, with our Autumn Sale. Here it is (click on the picture to make it bigger!): 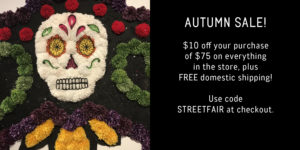 Save $10 off your purchase when you spend $75 or more at our website, plus free domestic shipping. That’s a substantial savings of $18.50. Use the discount code STREETFAIR when you check out.

Click here for our catalog pages, which are filled with traditional artisan goods for Dia de Muertos from San Miguel de Allende, Quintana Roo, Jalisco, and other parts of Mexico. You’ll also find traditional sparkly Advent calendars from Germany to count down the dark nights toward Christmas the month of December (as well as Advent candles from England), and an abundance of artisan goods for Yuletide, too: all made by hand in Germany, Sweden, Italy, and Mexico. Plus lots of great stocking stuffers: fir balsam pillows from the Sabbathday Lake Shaker Community in Maine, plus their full line of herbal teas and culinary herbs. Our new line of beautiful embroidered protective face masks, made by an extended family of artisans in Chiapas, Mexico, also make great stocking stuffers.

So, while we won’t see you this year at Dia de Muertos Lake Worth or Florida Day of the Dead, or at the Sankta Lucia Festival or at the Christkindlmarkt, either… a big sale like this is perhaps the next best thing. Please support small businesses and artisans: your transactional support at uncertain times means the world to real people who make real things. We all appreciate it, honest. Don’t forget to use the discount code: STREETFAIR.

Autumn Glow, or Your October Book of Days 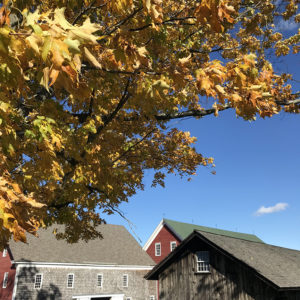 We are well into autumn now. It is October, the Feast, today on this second day of the month, of the Guardian Angels, and this evening, with the setting sun, comes Sukkot in the Jewish calendar, a holiday known also as the Feast of Tabernacles. A lot of the holidays / holy days that are not in my own family’s tradition are things I experience peripherally, and this is the case with Sukkot, which I associate with citrus. In particular, it is the fruit called etrog that is part of the Sukkot holiday. It is a very thick skinned citrus with an intoxicating fragrance. I’ve only ever held one etrog, but the experience stuck with me, for scent is a great portal to memory, is it not?

And so this year this is how October begins, with angels and intoxicating fragrance. It is for us a time of birthdays, too: Seth’s birthday was on the 30th of September, and my mom, she turns 94 today on the 2nd. At least we think so. We always celebrated on the 3rd, but a few years ago documentation surfaced that suggested we’d been celebrating on the wrong day and that Mom was actually born on the 2nd. And yet stories persist that really support the idea that she was born on the 3rd, for her middle name is Rosaria, bestowed upon her because she was born on the Feast of the Madonna del Rosario… which is on the 7th, but is often moved to the First Sunday of October, and in 1926, guess what? The First Sunday of October was on the 3rd. Anyway, our policy now is pretty much to just celebrate both days. Things were no different with her father: we celebrated Grandpa’s birthday on the 23rd of November forever, but looking back at records, the 21st may have been more accurate. So. What can you do? Perhaps there are benefits to a nonchalant approach to things like birthdays.

Be that as it may, I am here today mainly to bestow our monthly gift upon you: it’s the Convivio Book of Days calendar, this time for October. Cover star: the beautiful barns at Chosen Land, the Sabbathday Lake Shaker Community in Maine, with a maple in the foreground, glowing golden. Appropriate for so many reasons: 1) no place does autumn quite like New England; 2) Seth and I were visiting Chosen Land this very time of year two Octobers ago (and that’s when I snapped that photo); and 3) it is the month of Hallowe’en, a most spirited time of year, and I don’t think I know of any place that is so attuned to the spirits of those who have come and gone quite so much as Chosen Land. The Shakers were and are very welcoming to the idea that the spirit world is quite adjacent to the physical world, and mysteries run deep there. These are the things Seth and I like to tap into as this beautiful month unfolds and as we approach Hallowe’en at its close… which ushers in all the Days of the Dead that follow, through early November, to Martinmas on the 11th. The calendar will serve as a good companion to this blog, and to the annual Convivio Hallowe’en Dispatch from Lake Worth… and if you’d like to receive that story, please subscribe here. (The Convivio Dispatch is a whole other animal from the Convivio Book of Days Blog; it is a very occasional newsletter… but more often than not it’s not a newsletter at all and most definitely more of a story––essentially it is me, writing creative nonfiction.) If you don’t get it in your inbox already… well, I do think you’ll like getting it.

IN THE SHOP
October comes and we are closer to the height of our red letter days in the wheel of the year, the ones that brighten the darkness: Dia de Muertos (Day of the Dead), and Advent, the precursor to Christmas. We heartily believe in the value of both: of remembering those who came before and keeping those channels open, and of a slow approach to Christmas. Please take a look, if you will, by clicking here. You’ll see pages devoted just to Dia de Muertos and to Advent, and to lots of other things… oh, and that’s my mom you’ll see there, the birthday girl herself, at the top of the page, fishing from a row boat, circa 1950.

Our very best wishes to you this golden October and these autumnal days. Please stay safe, please stay well, please treat each other as you would hope to be treated. Much love involved.

This week, September transitions to October. An ending and a beginning in the midst of autumn and it is a week overseen by shining beings, for these are days traditionally given to angels: In three days’ time, on October the 2nd, we celebrate the Feast of the Guardian Angels, and today, the 29th of September, brings the Feast of St. Michael the Archangel––a day better known as Michaelmas.

The one that comes later is more personal, a day set aside to honor our personal guardian angels. It is a very old tradition, one that dates to the Fourth Century, when folks began setting up altars in their homes on the feast in honor of their angelic protectors. The one that comes today––Michaelmas (pronounced mick-il-mus)––begins with Michael the Archangel but has come to honor angels in general. Michaelmas is traditionally a night for a dinner of roast goose, and afterward, roasted nuts. But it is the humble blackberry that is most traditional for this day: In Scotland, there are Struan Micheil, Michaelmas bannocks, somewhat like a scone but more of a flatbread, cut into wedges, comprised of equal parts oats, barley, and rye, and traditionally made without the use of metal: wooden fork, wooden or ceramic bowl, baking stone. The bannocks are served with blackberries or blackberry jam, for it was Michael the Archangel who battled Satan, the fallen angel, and when Satan fell to Earth, it was in a bramble patch––a blackberry patch––that he landed. Legend has it that each year after Michaelmas, Satan returns to curse and spit upon the brambles that he landed upon, which is not so surprising: Bramble patches are thorny and painful. You’d probably curse and spit upon them, too, if you fell into a bramble patch. Be that as it may, many people will not eat blackberries after Michaelmas for this reason, and so they’ll eat their fill of the plump, juicy berries today.

My favorite part of this particular day, though, is that it is a chance to recite a litany of names––while Michaelmas is another old feast that comes out of the Catholic church, various traditions will honor today Michael as well as his companions, Gabriel and Raphael. Still others will include Uriel, Raguel, Ramiel, and Sariel. I love these names; they roll past my lips in an ancient and mysterious tongue, and the further down the roster we go, the more mysterious the names become. To speak them is to cross a fascinating linguistic bridge to the past. The “-el” suffix of these angelic names is Sumerian in origin, signifying “brightness” or “shining,” names that in their true form would be Micha-el, Gabri-el, Rapha-el, Uri-el, Ragu-el, Rami-el, Sari-el. The list goes on: Camael, Jophiel, Zadkiel, and Anael, Simiel and Oriphiel, then on to Metatron, Israfil, and Malak al-Maut. It is a walk across an ancient bridge of etymology that connects to the Akkadian ilu (radiant one), Babylonian ell (shining one), Old Welsch ellu (shining being), Old Irish aillil (shining), Anglo-Saxon aelf (radiant being), and English elf (shining being).

CALLING ALL ANGELS
Please join me tomorrow, 3 PM Eastern on Wednesday September 30, for Book Arts 101: Home Edition… it’s Episode 23 and this one is titled “Calling all Angels” and it is all about these angelic things, and more. Watch on Facebook Live and if you can’t make it at 3, worry not, video is posted immediately after the broadcast at our Facebook page.

A reminder, too, about our new embroidered protective face masks from Chiapas. Straight to the point: they are made by an extended family there whose traditional income source (tourism to Mexico) vanished with the pandemic. But in August, they began making face masks and they are just exquisite and you’ll love them and we love the fact that every purchase directly supports the family. They appreciate every order, and so do we. Click here to see them and to order… and yes, there are specials and free domestic shipping offers! (International orders? Write me at <mail@conviviobookworks.com> and we’ll see what we can do to get you a great price for shipping, too.)