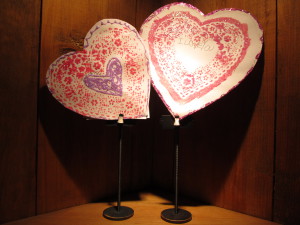 I am generally not a sappy guy, but a little sappiness is okay once in a while, and especially if it is Valentine’s Day. The valentines in the photo above were made for us by our niece, who was 5 at the time. That was just a couple of years ago, but I can easily picture us saving these two glittery paper hearts for many years to come. These are the things you save for a long time if you have even a quarter ounce of sappiness in you. And while we do try to keep things simple and not hold on to too much stuff, a handmade Valentine from your 5-year old glitter-crazy niece can be pretty difficult to part with, and there’s nothing wrong with that.

The tradition of giving sweet little somethings on Valentine’s Day goes back a long way. The day is named for a saint, even though we rarely use that “saintly” descriptor nowadays, but there is no real connection between St. Valentine and these gifts. There have been two St. Valentines in history, and no one is quite sure which of the two is celebrated today. Our celebration is most likely a combination of them both. There was a Roman priest named Valentine who was martyred on February 14, 269, for giving aid to persecuted Christians before becoming a Christian himself, but there was another Christian martyr named Valentine who scratched a message on the wall of his prison cell before his death. The message was to his beloved, and he signed it “Your Valentine,” and perhaps this is where the romance of Valentine’s Day comes in.

The day itself has long been considered the day that birds choose their mates for the year. Robert Herrick alludes to this belief in this poem from 1648:

Oft have I heard both youths and virgins say
Birds choose their mates and couple, too, today
But by their flight I never can divine
When I shall couple with my Valentine.

Up until the 19th century, the celebration of Valentine’s Day often began the evening before, at least in England and Scotland. Young men and women would take part in a sort of lottery on St. Valentine’s Eve, drawing names out of a box. The person that luck gave to you in this lottery would be your Valentine, and small tokens would be exchanged. Many weddings were known to come out of this St. Valentine’s Eve sport.

There are a few traditions of romantic divination that have come down through the centuries for Valentine’s Day, as well. The first unmarried person you’d meet on Valentine’s morning might just be destined to be your bride or groom, for instance, as the case may be. John Gay describes this in his poem “The Shepherd’s Week: Thursday; or, The Spell”… which happens to be a burlesque on the pastoral poems of another poet of the same era (early 17th century).

Last Valentine, the day when birds of kind
Their paramours with mutual chirpings find;
I early rose, just at the break of day,
Before the sun had chas’d the stars away,
A-field I went, amid the morning dew,
To milk my kine (for so should housewives do)
Thee first I spied––and the first swain we see,
In spite of fortune shall our true love be.

I don’t necessarily believe in divination, but I do believe in love, and I do believe that no kind of love is better than any other kind. What matters is being open, so that where love takes root, we let it grow.