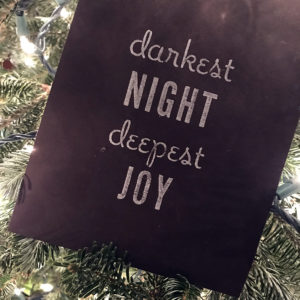 And now, the longest night arrives. With each passing day, since the Midsummer Solstice of June, we have been shaving a bit of daylight off our daily tally. By September’s equinox, day and night were balanced. Darkness continued to overtake light. On the 21st of December, though, our planet’s Northern Hemisphere will experience its longest night, and at 11:19 PM, Eastern Standard Time, its solstice moment, when things begin shifting again the other way. It is the constant rearrange, the back and forth of vast celestial mechanics, all based on the scientific fact that the Earth spins on its axis at a tilt of about 23.5 degrees. As we orbit the sun, that 23.5 degree tilt means that at this time of the year, the Northern Hemisphere is tilted away from the sun as we spin, while the Southern Hemisphere is tilted toward the sun. Give things six months and we will find ourselves in the opposite situation, as the Northern Hemisphere will be tilted toward the sun. But that is summer, and this is not; this is winter. It begins by the almanac with the solstice, though traditionalists will view this point as midwinter, which is why many of us will stand in dark churches come Christmas Eve and sing “In the Bleak Midwinter” as tears well in our eyes. We are tapping into those old ways when we sing that song on these long dark nights, and still the circle proceeds: it is the round of the year, with no beginning and no end.

The solstice is linked inextricably with all the celebrations of light that revolve around it: Advent, Sankta Lucia, Yule, Hanukkah, Christmas, Kwanzaa, Epiphany. We call down the light in each of them, to burn bright in the darkness. Light, a symbol of hope, of warmth, of kindness, of the passing of generations. Light is the central theme of Hanukkah, which begins with the setting sun this year on the 22nd, the day after the solstice. In ancient Jerusalem, during the defeat of oppressors by the Maccabbees, a small flask of oil, enough to keep the lamp of the Temple illuminated for a day, kept the lamp illuminated for eight days and nights. That miracle is commemorated each year during the eight nights of Hanukkah; each night, an additional candle is lit on the menorah. This year, that First Night of Hanukkah is met with the Fourth Sunday of Advent: we’ll be lighting all the candles of the advent ring: three purple candles and one rose candle, completing the circle of light, for Christmas is now just a few days away.

Our tradition each Midwinter Solstice night is to light a backyard fire in the copper fire bowl. We dispel the night, as the advent hymns tell us. The fuel for our fire is the remnant of last year’s Christmas tree, which we brought out to a corner of the yard some time after Twelfth Night last January. It’s sat there all these months, near the mango tree, shedding needles, drying, and still for all the world smelling like Christmas, even through spring and summer and fall, and it is good, it is right to have this reminder of Old Father Christmas in our lives all the year long. We will sit at the fire that he provides under the starry night sky and toast him with mulled wine and roasted chestnuts. In this small way we pull down the celestial mechanics of our planet and bring it directly to our tiny dot in this universe, and into our hearts, too: the old Yuletide illuminating and welcoming the new, connecting us with the past as we continue to forge that circle, no beginning, no end. With it, we know that Christmas is surely almost here. And so we welcome the solstice and we welcome Yule. And we welcome all the celebrations of light around it.