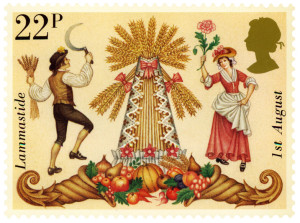 If you love summer, you may not want to read this Book of Days chapter, for as July melts into August we see already that summer is beginning to wane. We are almost six weeks past Midsummer’s solstice and just a little more than six weeks away from the Autumnal Equinox. And in reaching this point today we arrive at the cross-quarter day of Lammas, perhaps the least known of the traditional markers of the seasonal year.

There was a time when Lammas was celebrated far and wide, but now, it’s just not very well known: an old holiday rooted in our agrarian past that actually is quite useful: useful in gently easing us into thoughts of autumn, for it is the first of the harvest festivals. Lammas celebrates the first grain harvest of the season and tradition calls for the baking of the first loaf from the newly harvested corn or wheat. It is that loaf that gives the day its name: “Loaf-mass” from the Anglo-Saxon Hlafmass. Traditionally, the baked loaf was brought to church to be blessed, or brought to some community gathering. County fairs, perhaps, which begin to pop up this time of year, come out of Lammastide traditions, for they, too, celebrate the harvest.

John Barleycorn figures prominently in the Lammastide festivity. John B. is the personification of the grain, be it barley or corn or wheat, and of course to consume the grain it must be cut down… and so things don’t go well for John Barleycorn in the traditional British folk song, for John Barleycorn must die, of course. But he is resurrected in the circular nature of life as bread, and, since it is a folksong that was probably widely sung in taverns, as whisky, for the same grains that make our bread also make for some intriguing beverages. And so whisky, too, is a part of the Lammas celebration.

The suggestion of course is that you would do well to enjoy a meal tonight that includes a fresh loaf of bread and, if you can, a little whisky. All things in moderation. It’s the least we can do for old Lammas and for old John Barleycorn.

Image: One of a series of postage stamps issued in Great Britain in 1981 celebrating folk traditions.