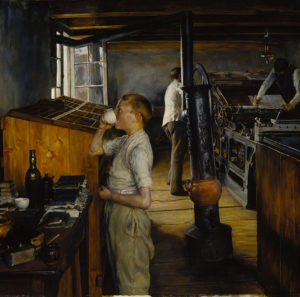 Fast on the heels of the Bartlemas Wayzgoose on this 28th of August comes the feast day of St. Augustine, a patron saint of printers and of brewers. Two celebrations in one week? That’s a lot for anyone, but we printers have been managing this lot cast upon us for centuries now. Good old St. Augustine of Hippo was born in Northern Africa, in what is now Tunisia, in 354. He became a patron saint of printers thanks to his prolific writing. Books like his Confessions probably kept a lot of early printers in business. The confessions were easy to come by for Augustine: he was a fellow who liked a good time, at least early on in life, and this is the root of his patronage for brewers. His mother, who is also canonized as a saint (St. Monica) prayed for his conversion. Eventually he did convert and when he did, he began to write. He was canonized at the turn of the 14th century, about 150 years before Johannes Gutenberg perfected the idea of moveable type. He is also a patron saint of people with sore eyes… which perhaps comes from reading too many books. Be that as it may, today we lift our glasses and toast a hearty Huzzah and Cheers! to the brewers and the printers.

Image: “Typesetter at Enschede Haarlem” by Charles Frederick Ulrich. Oil on panel. 1884 [Public domain] via Wikimedia Commons. We don’t know what’s in the typesetter’s cup… but back then, beer was probably safer than water.