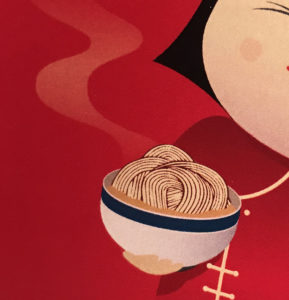 It’s Chinese Lunar New Year. The festival began with last Saturday’s new moon. And since it was a Saturday, we gathered the whole family and went to our friend Joy Sumonthee’s Asian Fusion restaurant in West Palm Beach. Mom loves it there, and to attain that honor is no easy feat for any restaurant. She loves it so much, that she and my sister have been known to go to Joy Noodles with trays of homemade manicotti or homemade pizza for Joy and her staff. They eat Italian in the kitchen, while we eat Thai or Burmese or Balinese in the dining room. When we go for Lunar New Year, Joy makes Mom something special. “Don’t order, Millie,” she tells her. “I’ve made something just for you.” Last year it was a new year dessert steamed in a banana leaf. This year it was a cold salad dish that is traditional for the new year in Thailand. There were chopped greens and there were long rice noodles: “Long noodles for long life,” Joy told Mom.

When Seth and I were there, just the two of us, earlier in January, Joy sat next to us and reminded us that Lunar New Year was coming. “It’s Year of the Mouse,” she said. I was puzzled. “I never heard of Year of the Mouse,” I told her. Joy raised her eyebrows and tilted her head and conceded that I was right. “Really it’s Year of the Rat. But rat and restaurant? Not good.”

I wasn’t so sure about this bit of political correctness brought to Chinese Lunar New Year, for the rat has always had its place of honor at the head of the Chinese zodiac, a smart cookie, a bit of a trickster. When the Jade Emperor announced the order of the zodiac animals would be determined by when they each arrived at his palace, Rat, who was one of the smaller animals, decided to ask Ox for a ride. Ox obliged, and Ox takes mighty steps, so was far ahead of the other animals. He was pretty certain he’d be first in the zodiac, and why wouldn’t he? But then Rat jumped off Ox and entered the palace first and this is why the Rat is the first of the twelve animals of the Chinese zodiac, ahead of the ox, the tiger, the rabbit, the dragon, the snake, the horse, the goat, the monkey, the rooster, the dog, and the pig.

Preparations for the new year ahead of its start always include a very thorough cleaning of everything in the home: it’s a washing away of all bad things from the last year. There is feasting with family and there are dumplings! Joy brought us two different kinds of dumplings on Saturday. Eating them, we hope for wealth and prosperity.

Fifteen days after the new year festival begins, the full moon returns. With it comes the Lantern Festival, marking the end of Lunar New Year. This year, it comes on February 8. This is usually when we see the dragon parades, and the dumplings will be replaced by balls of sticky rice, full and round like the full moon.

At Joy Noodles each year, ever since she opened her restaurant, Joy prints Lunar New Year cards to give to her customers and new t-shirts for the staff to wear for the year. The design on both always features the Chinese zodiac animal of the year. This year, Joy opted to skip the rat, swapping out the rat for a caricature of a woman holding a bowl of steaming noodles. Inside her card, she wrote us the following inscription:

So Joy did embrace Rat after all… but on her terms. We can’t hold that against her; she’s got a business to run, after all. Happy Year of the Rat to you, too. Gong Xi Fa Cai.