1 Comment
By John Cutrone Feast of the Annunciation, Lady Day

Our Lady of Perpetual Waffles 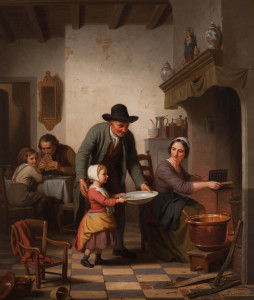 Today is the Feast of the Annunciation, which in earlier times was better known as Lady Day, and for many, the day still is known as Lady Day. I rather like calling it that, for it calls to mind the wonderful Billie Holiday (whose birthday happens to be coming up: April 7, 1915), but that’s another story. Lady Day marks the day that the angel Gabriel came to Mary to deliver the news that she was to bear a child, a son, and that that child would be the light of the world, the son of God.

The Christmas season is so special, so important in the round of the year, that references to it pop up throughout the year. Here, today, we have our first nod to it: with the Annunciation we are nine months from the Nativity. Its typical date is the 25th of March, but on those years when Lady Day falls during Holy Week, which it did this year (it was Good Friday), the feast is moved to the Monday following the Second Sunday of Easter, which is where we are at today. Tradition would have us eat waffles for our supper tonight. This, as far as most can tell, is a tradition based purely in linguistics. The tradition comes to us from Sweden, where Lady Day is known as Vårfrudagen. This translates to “Our Lady Day.” But Vårfrudagen, in some Swedish dialects, is awfully close in both spelling and pronunciation to Våffeldagen, which translates to “Waffle Day.” Swedes, as a result of this misunderstanding, have for centuries been eating waffles on Lady Day. If you need an excuse to serve waffles for supper tonight, there you go. You’re welcome. In Sweden, waffles are eaten at any time of day on Vårfrudagen: breakfast, lunch, or dinner. They are typically served with whipped cream and lingonberries or cloudberries.

Aside from the waffles and aside from the Christian celebration of the Annunciation, the traditional March 25 date of this holiday has long held significance in the calendar. March 25 was, for many, in the Old Style Julian Calendar, New Year’s Day. The 25th came on the heels of the Vernal Equinox: a time of new beginnings. The equinox still today brings the traditional Persian new year, Nowruz, a celebration that has only ended but a few days ago. But the 25th of March has long been considered a mystical day in Judeo Christian tradition. It was considered by many through history as the first day of creation, the day of the expulsion from Eden, the day the Israelites passed through the Red Sea, the day of the beheading of John the Baptist, and the day of Christ’s crucifixion.

We may be nine months to the Nativity but we are nine months, as well, to the Winter Solstice. In the cyclical year, this is the season of opening and rebirth. The open earth receives the seeds that burst forth into new growth. Mary conceives her child at this season magically, having “known not a man,” just as the earth goddess of the old ways did at this same time of year. And so the Vernal Equinox brings both rebirth (the Green Man, leafing out in plants across the landscape) and conception (the Sun Child, who will be born at the Winter Solstice). The connections between Pagan and Christian roots are deep indeed.

One thought on “Our Lady of Perpetual Waffles”