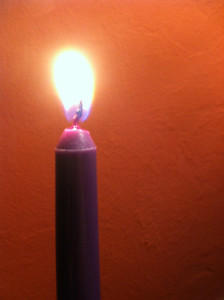 Today, the First of December, begins the Advent season, a time of preparation for Christmas. Here in the Northern Hemisphere, the nights grow increasingly darker on the road toward the Winter Solstice, and we counter that increasing darkness by increasing light from within. The sun may be growing weaker, sinking lower and lower in the sky, but each Sunday, beginning tonight, we light more and more candles in our homes. The tradition in most places is a ring of four candles, three of which are purple, one rose (or pink). Some cultures use three blue candles and a white one in place of the purple and rose candles, but the sentiment is the same. The first purple candle is lit tonight, on the First Sunday of Advent: one candle in the darkness. Come the Second Sunday, we light two purple candles. The Third Sunday of Advent is known as Gaudete Sunday and we light those same two purple candles plus the rose one, to symbolize a hint of joy and greater excitement as we get closer to Christmas. And on the Fourth Sunday of Advent, all four candles are lit. By then, we are deep into the darkest nights of the year, and our four candles are quite a beacon of light, and of hope.

This year, the Fourth Sunday of Advent happens to be the day after the Winter Solstice, which will occur on the 21st of December: the bleak Midwinter. In our brightly illuminated 21st century world, it can be easy to fall out of sync with the ever changing push and pull of our planet’s cycles of darkness and light, but it is this constant rearrange that is at the heart of so many of our customs and celebrations, the ceremonies of each day. Imagine a time before electricity, and it’s easy to understand the power of these cycles.

Earlier on, Advent began on the 12th of November, the day after Martinmas, and was a time of fasting in the Catholic Church in preparation for Christmas. This is no longer the case, even in the Church, but the idea of preparation, making our homes (and hearts) as fair as we are able, continues. In this house, we are firm believers in the idea that in order to fully appreciate the joy of Christmas, you need to set the stage for needing joy. This is the value of Advent. It doesn’t matter if your approach is a religious one or a secular one. Advent is a good time to do things with care. It’s a good time to make amends. If there are wrongs in your life, it’s a good time to make things right. Approach these darkening nights with this spirit of openness and thanksgiving and your joy at Christmastime, when it arrives, will be great indeed.

I wrote this as Advent began back in 2013. What astounds me most is that I’ve been writing this Book of Days as long as that. Also, that the dates are all the same: Advent begins this year on December 1, Midwinter Solstice arrives this year on December 21, Fourth Sunday of Advent this year falls, as it did in 2013, the day after solstice. If you still need advent candles or calendars, we can ship to you via US Priority Mail, which takes two days to most domestic destinations, so you’ll have just a little catching up to do. Check the catalog. Lots of great new Christmas items, too… new pyramids and smokers from Germany, and a brand new line of contemporary handmade artisan goods for Christmas from Sweden. Yule love it all!