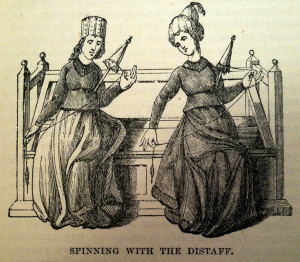 Christmas is over and it’s back to work. St. Distaff’s Day falls each January 7, the day following Epiphany, to remind us of the shift back to ordinary time. The return to work comes not without a little celebrating, though. Our oft quoted Book of Days poet Robert Herrick wrote the poem that best explains the holiday. It’s a poem from his 1648 book Hesperides, called “Saint Distaff’s Day, or the morrow after Twelfth Day.”

In truth, St. Distaff’s Day marked the day when women traditionally got back to work, especially at their spinning. The men still have a few days to go (quite a few this year, as Plough Monday, their traditional return-to-work day, is near a week away).

Perhaps the oddest thing about St. Distaff’s Day is the fact that there is no St. Distaff. The distaff is not a person at all but a tool that is part of the process of spinning wool or flax into thread, which is the first step to making cloth. The distaff and spindle were the tools that preceded the spinning wheel. Spinning was so associated with women’s work that the word spinster, which is happily not much used these days, once was a recognized legal term in England to describe an unmarried woman, and the terms spear side and distaff side were also legal terms to distinguish the inheritance of male from female children. Any woman who spun thread (and that would have been most women in earlier times) would know the distaff well.

St. Distaff’s Day was a day for mischief: yes, the women were trying to get back to their spinning, but the men, meanwhile, were there attempting to set fire to their flax. Of course, in the women’s attempts to put out the fires, many a bucket of water was tossed upon the mischievous men on St. Distaff’s Day.

Nowadays, perhaps it’s best to mark the day as one in which we acknowledge the shift from Christmas, a period outside of time, to the regular workaday world: ordinary time… but doing so with some measure of ceremony. Partly work and partly play and why not? Get back to work, but have a little fun, too.