The Honey’d Middle of the Night 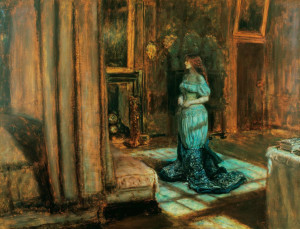 Tonight brings St. Agnes Eve, another old and obscure holiday, and with St. Agnes Eve we begin to set our sights toward the romance that burgeons forth each Valentine’s Day. For the old belief is that on St. Agnes Eve, young girls could expect to see visions of their future loves. I am always fascinated by these old ways of conjuring that incorporate magic spells of sorts, for they hint at the strange bedfellows the Church has kept in its history––especially with old customs that are hard to keep down. And so in this odd dance we honor St. Agnes by casting spells that most certainly have come down to us from the Old Ways––pagan earthbound religions. It is this very sort of thing that would get old Cotton Mather and his Puritan flock all worked up over just about any holiday… Christmas most especially, and, one can easily imagine, St. Agnes Eve. But we are human, after all, and these are our ways, passing customs on generation after generation from time immemorial. I think that’s a wonderful thing, and I don’t think Cotton Mather and I would agree on much of anything.

And so in Italy young girls might go to bed tonight without supper, quite voluntarily. The idea is that this will help them dream of their future husbands. Young girls in Scotland, meanwhile, will go to bed sated, but they may stay up later than usual. There, the custom is to throw grain onto the soil of a field at midnight while reciting the following spell:

Agnes sweet and Agnes fair,
Hither, hither, now repair;
Bonny Agnes, let me see
The lad who is to marry me.

My neighbor’s sister, who lives in Scotland, wrote a couple years ago on this evening to tell me that there in Scotland, Agnes is a common first name, and so is the name Senga––which happens to be Agnes spelled backwards. Perhaps there is some magic even in that. In other places, young girls will be baking cakes with the hope that their future husbands will come and turn them, or they will be walking to bed backwards with the hope that their future husbands will come to them in their dreams, or they will be eating a hard boiled egg before bed, yolk removed, the cavity filled with salt. The hope there, too, is to see their future husband. (With any luck, he’ll be carrying a pitcher of water, as well.)

The poet John Keats wrote, back in 1820, a long poem titled “The Eve of St. Agnes.” It would make fine reading for tonight. It is full of the romance and ghostly apparitions of that period of literature, and it is a poem that will take you some time to get through. Perfect for a cold wintry night like St. Agnes Eve. Here, if you can’t read the poem in its entirety, is the sixth stanza:

They told her how, upon St. Agnes’ Eve,
Young virgins might have visions of delight,
And soft adorings from their loves receive
Upon the honey’d middle of the night.
If ceremonies due they did aright,
As, supperless to bed they must retire,
And couch supine their beauties, lily white;
Nor look behind, nor sideways, but require
Of Heaven with upward eyes for all that they desire.

Helen Barolini, in her book Festa, which I was lucky enough to stumble upon at a library book sale and which has become one of my favorite books, also writes about the Eve of St. Agnes. Helen’s husband was the writer Antonio Barolini, and for her, the night and its customs are more personal. What she wrote in her book about this night always moves me, and I hope she wouldn’t mind my closing today with her words, describing her fascination with St. Agnes Eve when she was a young girl, intertwined with the bittersweet perspective that comes with age and experience…  all that life brings our way––all its joys, all its sorrows:

And though I fasted and hoped to see my intended as I slept on that eve, I never did picture Antonio Barolini in my imagination or in my dreams. But now I think how strange it is that his death came on January 21, Saint Agnes Eve.

She made an error in the day (January 21 is St. Agnes Day, not St. Agnes Eve), but still, that passage remains for me a poignant one. Our joys, our sorrows, intertwined, like the intimate dance of saints’ days and the old ways that will not die. Everything blends together: religion, custom, old ways and new, all the generations through human history, even oceans at some point in geography meld together. The waters, the people, the customs: we all become one.

This was an edited reprint of the Convivio Book of Days published originally on St. Agnes Eve, 2016. The image is of a painting by John Everett Millais, called “The Eve of St. Agnes,” made in 1863, and housed in London, part of the Royal Collection of Her Majesty Queen Elizabeth II. [Public domain] via Wikimedia Commons.

4 thoughts on “The Honey’d Middle of the Night”