The Mysterious Vigil of St. Mark 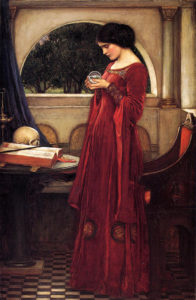 If you’ve been reading the Convivio Book of Days for some time, you’ve probably figured out by now that it’s the odder days and celebrations that capture my attention most, and tonight’s setting sun brings one of them: St. Mark’s Eve, a night for divination, mostly of the romantic sort, but of other types, too.

With St. Mark’s Day, tomorrow, the 25th of April, we reach a day that sets us firmly on the path toward summer, with blessings uttered upon the newly sown crops. It is a day associated traditionally with the return of migratory birds to northern climes; the cuckoo especially in Europe. In traditional reckoning of time, summer is near indeed: we’ll be celebrating it fully come May Day on the First of May, which is next Sunday, with May poles and songs like “Sumer is Icumen In.” You might think of St. Mark’s Day as summer’s harbinger.

Just as the seasons are viewed differently in traditional reckoning of time, so are the days. Days were traditionally reckoned to end with the setting sun, and still to this day it is the eves of holidays––the night before––that often receive the greater stature. Think of Halloween, the Eve of All Hallows. Or Christmas Eve, with its Midnight Mass, and Holy Saturday, with its Vigil Mass for Easter, celebrated only once the sun has set. These are all remnants of this traditional reckoning of time that so often gets mention here in this book of days.

And so it goes as well with St. Mark’s Day, and tonight, the 24th of April, brings St. Mark’s Eve, a night long set aside as one for divining the future. Romantic futures, especially, and here is perhaps the most common of divination spells for St. Mark’s Eve: Fast from sunset and during the night, bake a cake that contains an eggshellfull of salt, wheat meal, and barley meal. Once the cake is baked, set it to cool on the table and leave the door to your home open. Sometime over the course of the night your future love will come in and turn the cake. As you might imagine, this goes back to a time when we were not apt to lock our doors; I imagine this spell has been thwarted in modern times by locks and security systems and perchance by pepper spray, too.

But perhaps your curiosities run more macabre? Very well; we have a St. Mark’s Eve spell for you, too. The only problem is you will need to begin now for a divination event that will occur three years from tonight. For this and for the next two St. Mark’s Eves you’ll need to fast and then spend the hours between 11 PM and 1 AM sitting on the porch of a church. Come the third year, in that witching hour, you should see a procession pass before you of the shadows of all who will die in the coming year, as this excerpt from a poem by James Montgomery suggests:

‘Tis now, replied the village belle,
St. Mark’s mysterious eve,
And all that old traditions tell
I tremblingly believe;
How, when the midnight signal tolls,
Along the churchyard green,
A mournful train of sentenced souls
In winding-sheets are seen.
The ghosts of all whom death shall doom
Within the coming year,
In pale procession walk the gloom,
Amid the silence drear.

The poem is titled “The Vigil of St. Mark.” But back to matters of the heart: Just as at Halloween, there is as well a long standing tradition of divination by nuts on St. Mark’s Eve. Young women would set a row of nuts on the hot embers of the hearth, one for each girl. Each would breathe the name of her intended into the hearth and if the love was to be true, the nut would jump away as it got hotter. But if the nut sat there and was consumed by the fire, the love was not meant to be:

If you love me, pop and fly,
If not, lie there silently.

What will the future bring? If you must know, then perhaps St. Mark’s Eve is the night you’ve been waiting for. Peering into my crystal ball, though, I can already tell you: Summer is a’comin’ in. It won’t be long now. The birds have been calling to us to let us know.

Image: “The Crystal Ball” by John William Waterhouse. Oil on canvas, 1902 [Public domain] via Wikimedia Commons. Oddly enough, while we do have a photograph, the actual location of this painting appears to be not known. If only we had a crystal ball.

One thought on “The Mysterious Vigil of St. Mark”