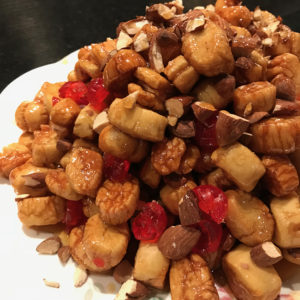 Two holidays come this 29th of September: It’s Michaelmas, when we celebrate Michael the Archangel, and later, with the setting sun, Rosh Hashanah, the Jewish New Year, will begin. Blackberries are traditional to Michaelmas and apples and honey, of course, to Rosh Hashanah. The apples and honey are purely symbolic: eat these sweet things to help ensure a sweet year ahead. You might also eat challah bread and Teiglach: small balls of dough that are baked in honey and mixed with chopped roasted almonds and candied cherries. My family discovered them one September in a local Jewish bakery. We were mesmerized by the tin plates of Teiglach, piled high into a cone, wrapped in cellophane. They reminded us so much of the struffoli we make each Christmas. We bought a plate and took it home and the teiglach was so good, we went back the next day for another. Something about the nuts and the cherries and the honey make for a sublime combination of sweetness and substance and texture. Eventually, we began making our own. The photo above is of my mom’s and sister’s Teiglach. They are so good (and not bad at all for a couple of Italian American Catholics!).

Blackberries for Michaelmas comes not from symbolism but from story, and I do love good story-based foodways. It is the story of Satan, the fallen angel, battling Michael the Archangel, and it is essentially thus: Satan fell to Earth and landed in a bramble patch––a blackberry patch. I love blackberries, but I can tell you––from well remembered experience––that they are a fruit that will make you curse and swear as you harvest them. So many thorns. They lay claim to your clothes and wound you. Satan cursed the bramble patch he landed upon, and legend has it that he returns each year to curse and spit upon that same patch.

Roast goose for dinner is traditional for Michaelmas, and it is one of the first traditional nut-roasting nights of autumn. In Scotland, there are Struan Micheil, Michaelmas bannocks, somewhat like a scone but a flatbread, basically, cut into wedges, typically made from equal amounts of oats, barley, and rye, traditionally made without the use of metal: wooden fork, wooden or ceramic bowl, baking stone. And served, of course, with blackberries or blackberry jam.

The day belongs to St. Michael the Archangel, but traditions have arisen in various parts of the world that honor other angels this day, too. Some will honor Gabriel and Raphael along with Michael. Others will include Uriel, Raguel, Ramiel, and Sariel. This is something I’ve written about in the past about Michaelmas, but will say it again: I love these names, for the further down the roster we go, the more mysterious the names become and we cross a fascinating linguistic bridge to ancient tongues. The “-el” suffix of these angelic names is Sumerian in origin, signifying “brightness” or “shining,” names that in their true form would be Micha-el, Gabri-el, Rapha-el, Uri-el, Ragu-el, Rami-el, Sari-el. The list continues: Camael, Jophiel, and Zadkiel; Anael, Simiel, and Oriphiel; Metatron, Israfil, and Malak al-Maut. Their etymology connects to the Akkadian ilu (radiant one), Babylonian ell (shining one), Old Welsch ellu (shining being), Old Irish aillil (shining), Anglo-Saxon aelf (radiant being), and English elf (shining being). Speak these names aloud; immediately we are transported to an ancient time, a time when angels were perhaps more commonly seen.

Are they still around? Many folks think so, and I am not one to doubt them. In a few days time, on the 2nd of October, we’ll celebrate another angelic day, one even older than Michaelmas and one much more personal: the Feast of the Guardian Angels. Its roots are in the Fourth Century, when believers began setting up altars in their homes each October in honor of their angelic protectors. But today, we enjoy the sweet things in life. L’shanah Tovah.

COME SEE US!
We begin popping up a lot throughout South Florida these last few months of the year. Here’s where you’ll find us these next few weeks. To be kept apprised, follow us on Instagram or Facebook: @conviviobookworks

FLORIDA DAY of the DEAD: OFRENDAS EXHIBITION OPENING
Sunday October 6 from 11 AM to 3 PM
History Fort Lauderdale (inside the historic New River Inn)
231 SW 2nd Ave, Fort Lauderdale
We’ll be there with a mini pop up of our traditional Dia de Muertos artisan goods. My family is also building one of the ofrendas in the exhibition.

FALL NIGHT MARKET at SOCIAL HOUSE
Saturday October 19 from 4 to 8 PM
Social House
512 Lucerne Avenue, Lake Worth
Social House is always a favorite venue of ours, and its magic is especially potent at night! Not sure yet what we’ll be showing, but count on anything we bring to be handmade by traditional artisans.

DIA de LOS MUERTOS LAKE WORTH BEACH
Saturday November 2 from 3 to 9 PM
Hatch 1121
1121 Lucerne Avenue, Lake Worth
Lake Worth’s homegrown Day of the Dead festival. Find us in our usual spot out in the courtyard near the dancing and the mariachi!

FLORIDA DAY of the DEAD
Saturday November 2 from 3 to 8 PM
Huzienga Plaza
32 East Las Olas Boulevard, Fort Lauderdale
One of the nation’s largest Day of the Dead festivals; current plans have us there for the first portion of the event in the park on the New River where the Skeleton Processional begins. (The event continues on in one form or another all the way through to 4 AM!)

2 thoughts on “The Sweet Things”