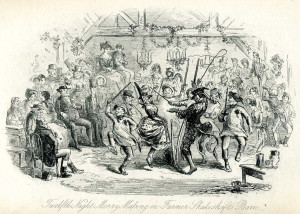 ELEVENTH DAY of CHRISTMAS:
Twelfth Night, Eve of the Epiphany

The close of the Christmas season begins here, and just as our Christmas celebration began in the nighttime hours of Christmas Eve, so the same comes Twelfth Night. If this is confusing (that Twelfth Night should come on the Eleventh Day), remember that even today, much of the way we celebrate holidays is based on traditional reckoning of time, in which a new day begins at sunset. This is why the nights before holidays are so important: Consider Christmas Eve, of course, but other nighttime events, as well, like Hallowe’en (the Eve of All Hallow’s) and at Easter, Holy Saturday, with its vigil Mass that begins only with the setting sun. And so Epiphany Eve, which is tonight, ushers in Epiphany the next day. The night is best known, though, as Twelfth Night, and it has long been a night of great festivity. When it comes to Twelfth Night, the more raucous the celebration, the better. It is a true vestige of the Roman Saturnalia festival of ancient midwinters, right down to one of the most common Twelfth Night customs: the baking of a cake that contains a hidden bean. In some places, it’s a bean and a pea. He who finds the bean is crowned King of the Bean; she who finds the pea, Queen of the Pea. These folks get places of honor at the revels. In the old engraving above, which pictures a grand old Twelfth Night gathering, you can be sure there is a King of the Bean somewhere amongst those folks, and maybe even a Queen of the Pea.

I am always fascinated by images of rousing old parties like this. I think it’s because I am the most awkward person at parties; and yet I picture the Van Tassels’ Quilting and Merrymaking Frolic in Washington Irving’s “The Legend of Sleepy Hollow” or the Fezziwiggs’ Christmas Eve party in Charles Dickens’ A Christmas Carol, and I am pretty confident I’d have a blast at either one. There would be fiddler and a caller and an abundance of food and steaming punch and, well… if you have a party like this, I hope you’ll send me an invitation. I’ll be there with bells on.

There is very little of this Twelfth Night festivity nowadays, especially here in the States where the colonial Puritans did a very good job of setting the pace for work, work, work… not to mention putting the cabbash on Christmas in general. But Christmas survived in this country despite their best efforts. Twelfth Night, however, might be considered a casualty. But I think we need Twelfth Night. Old Father Christmas comes to be with us each year for a visit that lasts but a couple of weeks. It’s only right to send him on his way again in proper fashion, and in our house, that means a celebration––even a small one if that is all we have left in us––is in order. Dinner should be a good one, and a festive Christmas punch is a nice accompaniment, as would be the same wassail we drank on New Year’s Day. Friends and family would be a great addition, as well as good music and an old game or two, like Snapdragon: Fill a shallow bowl with golden raisins and pour a bit of brandy over them. Darken the room (like the darkness of midwinter) and carefully set light to the brandy. Play the game while the brandy is aflame: Each person in the room snatches a raisin from the bowl and makes a wish upon the raisin before popping it into his or her mouth. This old game from Scotland may sound dangerous, but it’s less so than it would seem. Be careful all the same, of course. Each person’s wish should be granted before the next Twelfth Night… or so the story goes.

Christmas ends each year with Epiphany, which will come tomorrow. New things, meanwhile, are just stirring. Twelfth Night and Epiphany usher in the Carnival season. In place like Acadiana, tonight’s revels roll over into the parades and balls hosted by the local krewes that culminate with Mardi Gras, which this year falls on February 9. But again, I’m getting ahead of myself. As for Epiphany, it marks the day the Magi arrived at the stable in Bethlehem after nights of following the star that announced the birth of the Christ child. One of the most endearing figures in the story is an old Italian woman who is known as la befana. She and the Magi are the last of the midwinter gift bearers. Those three kings (los tres reyes) are the ones who bring presents tonight in Spain and Latin America, but in Italy, this is the job of la befana. As the story goes, at that first Christmas oh so long ago, the Magi stopped at la befana’s house and asked her to join them on their journey, but she declined the invitation. “I have so much housework to do!” she told them. And so the Magi left her home and continued on their way.

But as she swept her floors, la befana began to feel a bit remorseful, and once she finished her sweeping, she set out to find the Magi. But she never did find them, nor the child they had told her about. She searched and searched but to no avail. Still, to this day, on each Twelfth Night, la befana sets out upon her broom to seek them. As she makes her rounds, searching high and low for the child and the three kings, la befana leaves small presents for all the sleeping children. Even the ones who were naughty: they get coal, but la befana’s coal is sweet as candy, so even her coal is a nice present to receive.

It is la befana’s job to sweep away Christmas, and so she does this each year. She sweeps and sweeps, and by the time she’s done with her sweeping tomorrow at Epiphany, Christmas will be done. The Magi will return to their distant countries, and Old Father Christmas, whether he was welcome or welcome not, will be on his way back to the Northland. But the wheel of the seasonal round will continue to turn and new days of wonder will be upon us, even as we just begin to miss the Yuletide visitors who came to spend these dark midwinter nights in our company.

Image: “Twelfth Night Merry-Making in Farmer Shakeshaft’s Barn,” an engraving by Hablot Knight Brown (better known as “Phiz”) from the book Mervyn Clitheroe by William Harrison Ainsworth, c.1850. Today’s chapter of the Convivio Book of Days is a slightly moderated version of last year’s chapter for Twelfth Night. Like a visit from an old friend, or from old Father Christmas, slightly older, slightly wiser.