You Intoxicate My Soul with Your Eyes 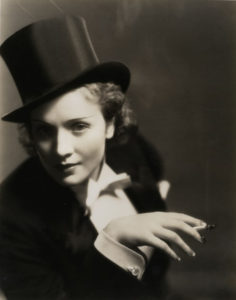 Last Wednesday’s Book Arts 101 broadcast that I did for the Jaffe Center for Book Arts was intended to be a valentine of the non-sappy sort, and though it mostly was, I think we together discovered that it’s hard to avoid all sappiness when it comes to Valentine’s Day. It’s just a given. It was my valentine to the viewers of Book Arts 101, and today I’m making it my valentine to all of you Convivio Book of Days readers, too.

If you decide to watch, you’ll learn a bit about the groundbreaking Marlene Dietrich, see some truly amazing artists’ books, and you’ll be privy to knowledge of my newest celebrity crush. (I’d describe him as a minor celebrity who could probably wear a tux as handsomely as Ms. Dietrich.) Haden the Convivio Shop Cat makes an unexpected appearance, too. Think of this broadcast of Book Arts 101 as my sweet little something to you––one that is perhaps a little savory and most definitely not terribly sweet. But just a little sweet. Just because.

The tradition of giving sweet little somethings on Valentine’s Day goes back a long long time. The day is named for a saint, even though we rarely use that “saintly” descriptor nowadays, but there is no real connection between St. Valentine and these gifts. There have been two St. Valentines in history, and no one is quite sure which of the two is celebrated today. Our celebration, as it’s evolved through the centuries, is most likely a combination of them both. There was a Roman priest named Valentine who was martyred on February 14, 269, for giving aid to persecuted Christians before becoming a Christian himself, but there was another Christian martyr named Valentine who scratched a message on the wall of his prison cell before his death. The message was to his beloved, and he signed it “Your Valentine,” and perhaps this is where the romance of Valentine’s Day comes in.

In country lore, the day itself has long been considered the day that birds choose their mates for the year. Our old reliable Book of Days poet Robert Herrick alludes to this belief in this poem from 1648:

Oft have I heard both youths and virgins say
Birds choose their mates and couple, too, today
But by their flight I never can divine
When I shall couple with my Valentine.

Ah, but already we’re getting sappy. See! I told you: it’s impossible to avoid. Roll your eyes if you must, then just give in. You may as well make the best of it.

8 thoughts on “You Intoxicate My Soul with Your Eyes”