Something’s Lost and Must Be Found 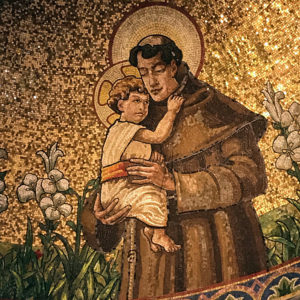 We were taught as kids that if you lose something, pray to St. Anthony and he will help you find it. Hence the old children’s rhyme:

Tony, Tony, come around,
Something’s lost and must be found.

Being an absent-minded person––a quality I inherited from my grandfather, Arturo De Luca––you’d be right in thinking St. Anthony and I are in touch quite a bit. I am forever putting things in extremely logical places, and then forgetting the logic behind it. So it seems at least once a week I am turning the house upside down looking for something I’ve misplaced.

There is, of course, a more formal way of invoking St. Anthony’s assistance in finding lost articles: St. Anthony, perfect imitator of Jesus, who received from God the special power of restoring lost things, grant that I may find [name the item] which has been lost. At least restore to me peace and tranquility of mind, the loss of which has afflicted me even more than my material loss.

These days, after months of quarantine and weeks of raising our collective voices for basic human equality, and an often mind-boggling federal response to both, that tranquility of mind can be difficult to find. My grandmother, Assunta, she certainly found a lot of it. June, for her, would begin with thirteen days of prayers to St. Anthony, who, together with San Giuseppe––St. Joseph––was one of her pals. She would sit in a folding upright beach chair in front of the statue of St. Anthony––the one that my dad painted so that it looked like he was wearing a cap, rather than sporting a Franciscan tonsure haircut––and she would mutter into the thick summer air her Tredicina to San Antonio: thirteen days of prayers that began on the First of June and continued through his feast day on June 13. And yes, the Tredicina could be offered for St. Anthony’s intercession to help you find something (though one would think after thirteen days you might move on), but it could also be offered for his general intercession with a problem in your life or it could be offered for no reason at all. Just because.

St. Anthony was born in Lisbon in the late 12th century but spent most of his life in Italy. He loved St. Francis and was an early Franciscan: cowled brown habit, sandals, that tonsured haircut. He is known for many miracles, one of the best known being his preaching to the fishes, who gathered in great numbers to hear St. Anthony speak. He preached to the fishes after trying first preaching to people, but they weren’t much interested at the time, so he took his lesson to a nearby body of water and found a more receptive audience… which then impressed the people enough that they began listening. He was also known to have donkeys kneel before him. And just before he died, in Padua in 1231, he was seen in ecstasy holding the baby Jesus in his arms. This is the image we see most often depicted in the statues outside of Italian American homes, including the one that my father painted. San Antonio is a presence we Italians like to talk to, like an old paisano. Especially now, in early June.

Anyway, these are the things that, to me, always meant that summer was here. Summer’s arrival by the almanac is still more than a week away, but the heat and humidity say otherwise, as do our traditions. Old Midsummer is soon upon us… which reminds me: don’t forget our lovely new Swedish Midsommar decoration, made by hand of painted wood and ribbon! We’ve got one sitting in our kitchen corner cupboard right now and it brings us some simple happiness each day. Plus I can tell you that with no pop up markets for us to attend and show our wares, your Convivio by Mail orders are much appreciated these days. Free shipping when you spend $50 across our catalog, so go on: order a Midsommar Maypole along with some handmade soap or some herbal tea and you’ll earn free shipping and help support Convivio Bookworks and the folks who make the things we sell. We know most of those folks by name. They appreciate your support as much as we do. (And by the way, that’s a super cool photo of my mom fishing on a lake, circa 1950, at the top of the Convivio by Mail page!)

Quarantine has thrown this aspect of my life a bit off the rails, but I promise to be better about writing. Some of my favorite days are coming, Juneteenth among them, and how can anyone not give Juneteenth the respect it deserves––this year most especially. You’ll hear from me again then, most likely, but maybe for Bloomsday, as well, on the 16th. Be safe, everyone. Much love.

Image: A shimmering mosaic of San Antonio with the infant Jesus located at the Basilica di San Giacomo in Bellagio, Italy. We were there last summer, not long after the feast day of San Antonio di Padua. Though the mosaics were certainly completed later, the church itself dates to the Twelfth Century, about the same time that St. Anthony was roaming the earth, preaching to the fishes.