8 Comments
Arrival of the Shakers in America 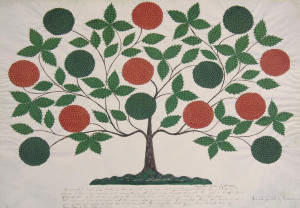 Here’s an updated version of a blog post for this day, published originally on the 6th of August, 2015. It is updated for this Covid-19 era and with updates to the roster of Shakers living in this place known as Chosen Land. The rest of the message is just the same, filled with the same spirit. ~ John

The Sixth of August is an important day for a small group of folks Seth and I know and love in Maine. They call each other brethren and sisters and they respond to questions in the old style yea and nay. They are the Shakers of Sabbathday Lake and there are three of them, currently: Brother Arnold, Sister June, and Brother Andrew.

August 6 marks the anniversary of the arrival of Shaker founder Mother Ann Lee in America. It is a day the Shakers call The Glorious Sixth. Mother Ann and a small band of followers left England and came to New York in 1774. Their official name was the United Society of Believers in Christ’s Second Appearing, but they were ridiculed for their whirling dances and outsiders began calling them Shaking Quakers, which was meant to be derogatory. They embraced the name and soon began referring to themselves as Shakers. The movement found fertile ground in America and Communities were founded in the 1700s and 1800s throughout New England and New York and west to Ohio, Indiana, and Kentucky, and there was even a short-lived southern Community in Florida, up near Kissimmee.

Don’t let the yeas and nays fool you: the Shakers are a progressive bunch. From the start, they stressed equality of the sexes and the races. African Americans (most of them former slaves) were fully equal in their Communities. Shakers then and now refer to God as Mother/Father and women have always held prominent leadership roles. Early Shakers were quick to jump on board with technology, too, and even invented early versions of many tools we use even to this day, like flat brooms, and washing machines. A prominent Shaker motto is “Hands to work, Hearts to God,” a tenet of their belief handed to them by Mother Ann. Technology was useful in helping them make the work they had to do more beautiful, more prayer like. To that end, the things that Shakers made in their Community industries over the years have become known for their exquisite craftsmanship. And there have been many things: furniture, of course, as well as oval boxes, poplar ware, even the culinary herbs and herbal teas they package today (which we offer at the Convivio Bookworks website and which the Sabbathday Lake Shakers have been selling since 1783).

And so today it will most likely be Brother Arnold who prepares a big meal for the Community. Usually friends will gather and join them, but this year, in this time of social distancing, it will be a small and quiet celebration. Perhaps they will eat out on the lawn or in the dining room of the Dwelling House. Come sundown, they will gather up and head across the street, to the 1794 Meetinghouse, a building so beautiful in its simplicity. There are no column supports to interrupt the openness, which gave the early Shakers plenty of room for their ecstatic dancing. The Shakers today do not dance, but still the building inspires. Whenever I am there, I look at the wide plank floor. I think of all the Shakers who whirled and danced on that floor. I look at the beams painted with blueberry milk paint, the original paint from 1794, still blue, still the hue of sky at dusk.

There will be readings and set Shaker songs. One song that is always sung on this night begins At Manchester in England, this blessed fire began / And like a flame in stubble, from house to house it ran…. There will be testimonies from anyone who is moved to speak, followed always by Shaker spirituals inspired by those testimonies. And through it all, despite the lanterns, night will slowly descend on the Meetinghouse and the Community gathered, wending its way, weaving its magic.

Seth and I were there with them only once for this occasion, in 1996, when I was a printing intern with Brother Arnold. And I remember always what happened as the room filled with darkness and lamplight. The women sat on one side of the room and the men on the other, as is the Shaker custom, and in the faces of the sisters and other women across from me, I could discern the faces of Shakers throughout time. We may have entered the Meetinghouse in 1996, but it didn’t seem to remain 1996. Sacred spirit filled that sacred space.

Seth and I will be thinking of our Shaker family tonight as the sun sets, as we do each Sixth of August and so many times through the year. We will think of them and remember this night and our privilege of sharing it with them. The Sabbathday Lake Shakers call their home Chosen Land. To be there is to understand why. Especially on the Sixth of August: it is one night where this title becomes particularly apparent.

Please join Seth and me on Wednesday, August 5 at 3 PM Eastern Daylight Time for a live broadcast of “Book Arts 101: Home Edition” on Facebook Live. Click here for a direct link. Video is available after the live broadcast if you can’t be there at 3. This episode is subtitled “Simple Gifts,” and we’ll be chatting about Shaker craft and our experiences working with the Shakers over the years––me as a printing intern, Seth as a gardener and tour guide. I will no doubt be relating the tale of that August 6 evening in 1996, and we’ll also have some lovely things to show you: Shaker oval boxes, the handmade books we made with Brother Arnold, and probably a few other odds and ends from our collection. There’s a new “Book Arts 101: Home Edition” each Wednesday, by the way. Each episode is an unscripted ramble through the book arts, craft and design… and whatever else drifts through my head at the time. You can watch all the previous episodes here (and future ones, too).

The image above is the most famous of the Shaker gift drawings received from the spirits in the Era of Manifestations: a mid-nineteenth century period of intense Shaker spiritual revival. The drawing is called “The Tree of Life” and it was seen and painted by Sister Hannah Cohoon at City of Peace (the Hancock Shaker Community in Massachusetts) on July 3, 1854.