Under the Crescent Moon 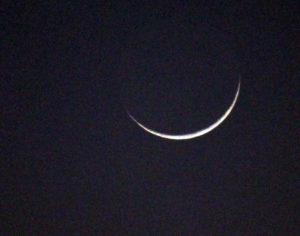 Ramadan moves through the year, each year earlier and earlier, and this year it begins with the sighting of this month’s new crescent moon, which in most places is expected to be this evening, this 12th of April. It’s not so much that Ramadan moves around as that it always comes in the ninth month of the Islamic calendar, and the calendar, being a lunar one, operates differently from solar calendars. Ramadan was a summer holiday a few years ago, and now it is a spring holiday, and it won’t be long before it is a winter one… and sometimes Ramadan can come twice in a solar year, which will happen next in 2030, when it will be celebrated in January and again the following December.

Ah, but now it is spring and now comes Ramadan and with it, Muslims will fast during the daylight hours and eat and drink only when the sun is down, all through this month from one crescent moon sighting to the next. It is a time of reflection, a time of thankfulness, a time to gather with family, and a time, more so than other times of the year, for good deeds. Before the sun rises each day, many families will enjoy a big meal called suhoor, a meal meant to sustain through the day. (This is definitely not the time for a slice of buttered toast for a pre-dawn breakfast!) And once the sun sets again, the fast is broken with a sweet delectable date, followed by a meal called iftar.

With the sighting of the next crescent moon, this year in May, Ramadan will conclude with a big feast called Eid al-Fitr: the Sweet Festival. Our friend Manal Aman of Hello Holy Days! in Canada has for years been following her calling to make these holidays mainstream, something familiar to us all. She designs cards for Ramadan and Eid al-Fitr, and other products, too, like countdown calendars and gift bags. Her work is gorgeous, and, I think, so important in helping us build bridges rather than walls. We sell her cards at Convivio Bookworks and encourage you to have a look and if you know people who celebrate these holidays, join us in sending them greetings. In fact, this year, we are participating in Manal’s Great Big Eid Card Swap and we’ve been buddied-up with a pen pal in Jackson Heights, New York. I am putting our card in the post today. You’ve got a whole month––all the way until the next crescent moon––to do the same for your friends who are celebrating. And when you do, tell them, “Ramadan Mubarak!” 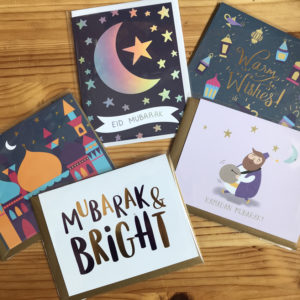 Shop our collection of Manal’s cards for this season of Ramadan and Eid al-Fitr by clicking here. And back in November, Manal interviewed me on Instagram TV for her series ahead of Small Business Saturday; we had a fun time chatting about the book arts, about my mom, about our Shaker Rose Water and my experience as a print intern at the Sabbathday Lake Shaker Community, and why it’s so important to us to carry Manal’s work in our shop. You can watch the 30-minute interview by clicking here. 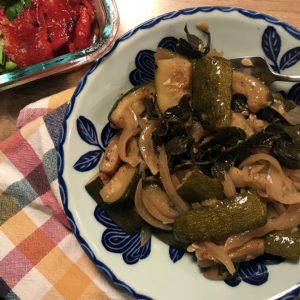 This year, when Ramadan began, Seth and I mailed one of the new Ramadan and Eid al Fitr cards we sell at our online Book of Days Catalog to Tara and Sami, who run The Pelican on Lake Avenue in Downtown Lake Worth. I don’t know if we have the best business model, exactly––a big motivation for me in including Ramadan and Eid cards in our catalog was simply so I could send one to Tara and Sami as a thank you for all their kindnesses to us over the years––but I’m really glad we offer these cards. I feel like we are doing a good thing by including them, for a spirit of inclusion is what we strive to build through this blog and through our little company. Inclusion and understanding (in my experience, anyway) make for a far better, stronger community.

With Eid al Fitr, which begins with the first sighting of the new crescent moon this month, Ramadan concludes and the month of fasting in the Islamic calendar ends. Depending on where you are in the world, Eid will begin tonight or tomorrow night. Customs for Eid al Fitr vary widely from country to country, but charity and prayer, respect to others, and food, especially sweets, are at the forefront. The greeting for the season is Eid Mubarak: a blessed Eid.

My ancestral home in Southern Italy is a place in close proximity to the Islamic world, and so there is a strong Arabic influence on the culture. That influence is probably most notable in the regional dialects of Puglia and in its cuisine, all of which have been brought to the States, too, through the immigrants that came to this country in the late 19th and early 20th centuries. Last week, when I went to mow the lawn at the family homestead, my mother sent me home with roasted red peppers she had just made, as well as an old family recipe I love: zucchini and onions, cut into long strips, sautéed, and finished with vinegar and fresh mint. I don’t know about the roasted peppers, but the zucchini dish, which we eat chilled a day or two after it is made, so that the flavors develop and meld, is distinctly Arabic. It’s a dish that was handed down to my mother from my grandmother and certainly through a long line of grandmothers through time immemorial.

It may be the result of growing up in a place as culturally diverse as South Florida, where people from all over the world gather to forge a community, but I love seeing these connexions. They are, to me, the strongest bridges, especially when we take those influences and call them our own (perhaps without even realizing the commonality of our roots). We get our nourishment not just from food but from each other, through a thread that reaches back through the centuries. Talk about blessings! Eid Mubarak.

Image: Momma’s roasted peppers, dressed with fresh olive oil and flat leaf parsley, and zucchini with vinegar and mint. So good! We’ll include the recipes in the “real book” version of the Convivio Book of Days. Guess what? I’m almost done writing the proposal and the first chapter!

Ramadan, the month of fasting, is coming to an end, and for Eid Al-Fitr, which arrives in this part of the world with tonight’s setting sun and the sighting of the new crescent moon, here is a reprint, slightly revised, of a Book of Days chapter from 2014. The sentiment is the same: Eid Mubarak. Blessed days. ~ John 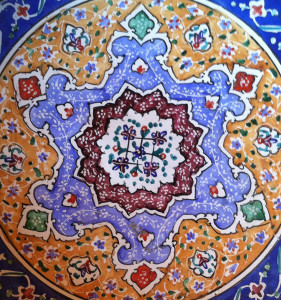 My maternal grandparents came from Lucera, a small city in southern Italy that was, in the 13th century, home to a population of perhaps 60,000 Muslims that had been expelled from Sicily by Frederick II, the Holy Roman Emperor. The colony became known as Lucaera Saracenorum, or Saracen Lucera. My grandmother, a small woman whose deep olive complexion would grow darker and darker as each summer progressed, often told of long-ago Moroccan blood in our family lineage, and whether this is fact or the stuff of story is not entirely known. A good story is a good story.

But the facts do tend to support Grandma’s story. The Saracen colony at Lucera was comprised mostly of people of Northern African descent––Arabs and Berbers from Arabia, Tunisia, and Morocco. And they left their imprint on the culture of Southern Italy in subtle ways that still persist to this day linguistically (the dropping of vowels at the ends of words––which even came over to America and has influenced the Italian American communities in New York, especially) and in the way we cook. When we add fresh mint to a traditional Italian frittata or make a favorite summer zucchini dish that comes from my Grandma Cutrone, heady with the scent of vinegar and mint, it is a nod to that influence on Italy from Northern Africa.

And so I have a longstanding fascination with the cultures and traditions of Northern Africa, and am always in awe of the tile work and the paper marbling and the cinnamon-infused tagines and sweets scented with rose water. And in my mind, itself an aromatic stew that does such a good job of melding fact and fiction that I sometimes don’t know what is real and what is dream, I like to imagine myself at a feast celebrating a holiday like Eid Al-Fitr. It is the three-day celebration concluding Ramadan, the month of fasting. It is a time of prayer but a time of abundance, with good food and good aromas and good company and good deeds. It is a time meant to bring out the best in people. It begins with the sighting of the new moon’s first faint crescent, which, this year, should be just about now, this 14th night of June. Being a lunar holiday, the dates are not fixed in our Gregorian calendar, which is a solar calendar. But as the days passed last week, I watched the waning crescent moon grow increasingly slight with each passing morning near sunrise, knowing that the waxing crescent moon would soon follow, bringing these joyous days to Muslims all over the world. To them and to all of us, Eid Mubarak.

Image: Detail of a small enamel plate from Morocco that was a gift to Seth & me from someone, long ago. The memory melds with all the others in my mind, into that aromatic tagine… but that’s what makes for good cooking and for good stories: Sometimes it’s not the details so much as the whole. The patterns on this plate fascinate me.