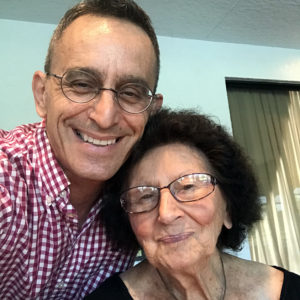 That’s my mom and me in a dinner table selfie. You can’t see the table before us, but I assure you it is a picture of abundance. It was Easter dinner, which means not one square inch of the table is empty. So much food, all of it made by the wonderful mothers in my life: my mom and my sister. I may have helped a little, but trust me, they did 99% of the work themselves. They love to cook and they love to share their culinary talents and this is how it has always been in our home, beginning with my grandparents before them and, I’m sure, generations before my grandparents, too. We express our love through a good meal. This Mother’s Day, we will gather round that table again.

My mother goes by Millie, though her name really is Carmela (spelled with one L). She is the daughter of immigrants (her older sister was born in Italy) and she is full of good stories. She remembers the finest details and the names of all of Grandma’s friends and neighbors, whose names all began with “Cumara” (pronounced coo-ma-ra) because all the women back then in our Italian American world were called Cumara––kind of like a godmother. The word comes from the Italian comare, godmother, but cumara is a Southern Italian dialect word and not true Italian. It is basically a descriptor for a good friend. Female of course; the masculine version is cumpare. In the Lucerine dialect that they brought from Italy, cumara was shortened, at least in spoken word, to “Cuma:” Cuma Catherine, Cuma Jenny, Cuma Josephine, Cuma Marietta, Cum’Assu. The word is not used much these days, save for the older generations. But in a way, the cumaras are mothers to us all, delivering love and counsel and yes, sustenance through good food. Happy Mother’s Day. 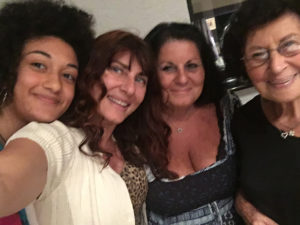 It was Pizza Night on Saturday––homemade pizza that my mom and sister made from scratch. My grandma used to do this when I was a boy and it was a very big production back then: I would watch as Grandma measured the flour and salt out onto the wooden board and form it into a well; the yeast, proofed in warm water, would go into the well, and then Grandpa would hold the board steady while Grandma mixed and kneaded the dough, by hand. It took muscle and strength. It seemed every baking project began this way, whether it was pizza or taralli or macaroni or the crustilli at Christmas.

Nowadays the dough-making is easier––my mom and sister use the big stand mixer on the kitchen counter. One result, maybe, is we have these things more often. But still it’s special anytime there is homemade pizza or homemade anything. My family truly uses food as an expression of love. Sitting down for a meal––especially a Sunday dinner, as we will today, for Mother’s Day––comes with an understanding that it is an event that will last for hours. There is always abundance and we are always well fed and fully loved. I’m sure there are psychologists who will find this unhealthy, but this is the way of my family. And when you get right down to it, it is the core of the Convivio way of doing things. Mangia is our mantra.

Mother’s Day here will revolve around the table, which is no surprise. We will gather and we will celebrate all of the mothers in our lives, being thankful for each of them, whether they are with us now or not, and whether they are mothers we were given or mothers that we chose. The definition can be very open. Certainly all of the women who took part in raising me––mother, grandmothers, sister, aunts, and more––all have played their part. How wonderful to be part of that community. 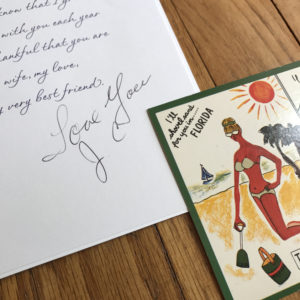 It’s Mother’s Day on Sunday. There is a fascinating story about Anna Jarvis, the founding of the holiday, and its history, but I’ve told it before so I’ll not tell it again here today. (You can type Mother’s Day in the search feature of the blog (down below) and pull up quite a few past chapters to read if you’d like.) No, this Mother’s Day I’m going to focus on the idea, as Angela Carter suggests, that “strange things sometimes still happen,” because they do over and over again in my life. The most recent occasion, impeccably timed, was just a few days ago.

I’ll begin by telling you that I have finally seen my father in a dream, for the first time since he died three months ago. Or at least it’s the first time I woke up and remembered seeing him. I used to think that I didn’t dream, until I read a book about dreaming, some 25 years ago, that challenged that very notion. Keep a pen and a journal at your bedside, the author suggested, and begin writing what you remember as soon as you open your eyes. I did. That first morning I awoke and followed the author’s suggestion; I’ve not forgotten that dream since. My mom and I were at a counter, like a fast food counter. Up on the menu boards, all illuminated, were hairdos you could choose for yourself. They were three dimensional and spinning around slowly, like wigs on rotating mannequin heads, but quite glamorous. My mom chose a bouffant updo. I remember thinking it was all like a B-52’s video. And now, all these years later, this is one of the things taking up valuable memory space in my brain. Not only did I remember details from my dream that morning, but I learnt also that I dream in color, which is neither here nor there in my tale. My point is I do dream, we all do, but I don’t always remember my dreams. Last week, though, I woke up and remembered seeing Dad. We were in a hospital, and he gave me one of those looks he often gave me: a slight shoulder shrug accompanied by raised eyebrows, a knowing glance he would share with me when no one else was looking. I woke up happy, like Dad had finally paid me a visit.

I went to work and my days at work can be a bit frazzled lately. I don’t seem to have the same ability to concentrate on one task sometimes, and so I bounce around from project to project. It was Thursday, so I was getting the gallery where I work ready for a letter writing social we host every First Friday. We call it Real Mail Fridays. We keep most of the supplies in rolling cubbies, so I was rolling the cubbies into the gallery from the closet. But there is, as well, a wooden cabinet in the gallery, an old cabinet from Spain, carved by hand, a lovely piece. It’s got two doors that open at the top, two doors that open at the bottom, a drawer, and a pull-down desk of sorts. That cabinet’s been gathering the clutter of Real Mail Fridays past for years now, to the point that the doors at the bottom half were having trouble staying shut. And though I didn’t want to do it, really, I suddenly felt compelled to stop all else I was doing so I could organize the cabinet.

I got a recycle bin, and once that was filled, I got another one. Into the bins went torn or dented papers, single envelopes that had no notecards to match, those little red papers that no one had used since the first Real Mail Friday four years ago… and then there were cards, some brand new but with very specific categories, like To My Granddaughter on Her First Communion. I knew where these came from: every member of my family was employed by Hallmark at various times in their lives, and this stuff is everywhere. I know that my sister sometimes clears things like this out of the attic and then my mom gives it to my friend Kelly, who loves Real Mail Fridays. She’s like the Real Mail Fridays queen. This stuff, this junk, was here through Mom by way of Kelly. And then there were all these cards that had been written on already, signed by people I had never heard of. These I knew had nothing to do with Mom, but who knows where they came from. I was tearing through all this junk, tossing handfuls at a time into the recycle bin. I could smell the goal ahead of me: clean, crisp organization.

And then I came across a postcard. When we first moved to Florida, my dad had to stay behind in New York for a few months, and my mom sent him a postcard to tease him about the situation. It was a split panel illustration. On the left is a woman in a bikini on the beach, on the right is someone bundled up in a coat and boots with a snowman. They both have shovels. “I’ll shovel sand for you in Florida,” it reads, “if you’ll shovel snow for me up North.” There was no writing on the postcard, but I know this is the card that I had seen for years in a scrapbook. A few other cards followed this, and I stopped at each one and opened them. A card with a car on it was a Father’s Day card to my dad from my nephew John. There were two birthday cards to my dad, signed by cousin Larry. And then there was a Valentine card and a Mother’s Day card, large ones, to “my wife.” I opened them, and there was my dad’s distinctive handwriting. My dad was not a sentimental guy, not by a long shot, and I’d be willing to wager he didn’t even choose these cards for Mom; my sister would’ve bought them and brought them to him to sign. But the Valentine is signed “Love You, Your Husband” and then, “All the words are true.” And the Mother’s Day card is signed, “Love You, JC”––his initials, his completely unsappy way of signing.

To find an old Mother’s Day card to my mom, signed by my dad, on this random day when I had finally seen him in a dream, in this random place, in a cabinet that’s needed cleaning out for years and to finally do it on that same day… all I know is strange things sometimes still happen. To all our mothers: mine and yours, mothers given and mothers chosen, mothers in our midst and mothers long gone: Happy Mother’s Day.