Decadent Desserts (and Your February Book of Days) 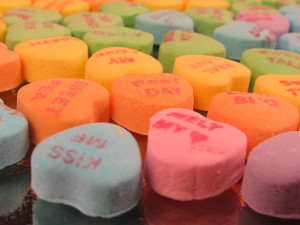 For you today, a belated gift: Your Convivio Book of Days Calendar for February. Perhaps someone more generous will give you another gift today: minne de virgine, a delectable Italian pastry made especially for this day, St. Agatha’s Day. Then again, should your friends be susceptible to fits of embarrassment, you may want to just go find them for yourself. The pastries, made from sponge cake with a mound of sweet ricotta cream on top, then covered in marzipan and dotted with a cherry, are meant to evoke a certain part of the female anatomy. They are the “breasts of the virgin,” the breasts of Sant’Agata, a specialty of Sicily and especially of Catania, where Agata lived in the third century.

The pastries come from the story of her martyrdom for her faith: The Roman governor of Catania became enthralled with the beauty of Agata. Agata, however, one of the secret upstart Christians in town, had taken a vow of chastity to protect her virginity. The Roman governor would have none of it, though, and continued his advances. Agata continued to reject him to protect her faith… and for this she died. The Roman governor had her killed in a gruesome death that it pains me to describe for you. Yet I fear I must… for it’s the only reason these delicious minne de virgine make any sense: he had Agata’s breasts severed before roasting her above a bed of live coals. I told you it was gruesome.

Sant’Agata is now patroness of Catania. She is invoked for protection from breast disease (for obvious reasons) as well as from volcanic eruptions (again… well, use your imagination, as this may perhaps be a combination of both elements of her martyrdom).

Eventually, it was the nuns of Catania who began baking the confections that we enjoy each Fifth of February. It’s part of what makes Catholicism so incredibly fascinating, especially in Italy. Marzipan pastries in the shape of breasts made by Catanese nuns? This is probably a big part of what makes Protestants so nervous around Catholics. We are a somewhat dramatic people.

The celebration in Catania has been going on for a few days now, but it all culminates tonight with processions through the city of large carriages and spectacular candelore––enormous towers with lit candles depicting scenes from St. Agatha’s life. The candelore are paraded and danced through the streets of Catania to shouts of “Evviva Sant’Agata!” by men in full costume, the towers hoisted upon their shoulders. (Again, not for the faint of heart.)

My Italian professor, Myriam Swennen-Ruthenberg, should she be reading this, might be thinking now of a famous scene in Giuseppe di Lampedusa’s novel Il Gatopardo (The Leopard, in its English translation) in which Don Fabrizio looks over a vast table of Sicilian desserts that include these minne de vergine, the breasts of St. Agatha. He asks for some and receives them and he beholds them on his plate. He thinks of the famous paintings of St. Agatha presenting her own severed breasts on a plate. He asks, “Why ever didn’t the Holy Office forbid these puddings when it had the chance?”

Our image today is inspired by the cover star of our Convivio Book of Days Calendar for February: It is the 150th anniversary this year of the Conversation Heart––a famous American candy, to be sure: sweet, simple, decidedly non-dramatic. A confection, one might safely guess, not invented by the chaste nuns of Catania.