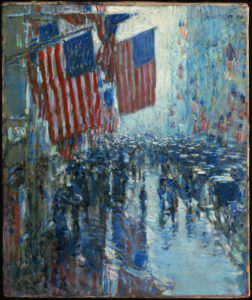 It is Memorial Day and we remember all who gave their lives for their country. This is the purpose of Memorial Day, pure and simple. It is an American holiday, though versions of it are celebrated around the globe, like in Finland, where the Third Sunday of May––Kaatuneiden Muistopäivä, or Commemoration Day––is held in remembrance of those who died in Finnish wars. As we saw in the previous chapter of this Book of Days, this tradition of remembering the dead at this time of year, especially in the military, goes back to Ancient Rome.

Be that as it may, for us here in the United States it goes back to the Civil War. In 1865, an “Independence Day of a Second American Revolution” was organized in Charleston by freed slaves, and on that May day, they honored Union soldiers buried there in unmarked graves. There were other informal early summer decoration days throughout the country during the war: in Warrenton, Virginia in 1861, in Savannah in 1863, in Gettysburg in 1864, and in Waterloo, New York, after the war had ended, in 1866.

It was a simple decoration day back then and that’s the name folks gave to it: Decoration Day, as they decorated the graves of fallen soldiers with flowers. Just as the Romans did. Again, flowers for remembrance. In 1868, the first formal celebration of Decoration Day was held at Arlington National Cemetery by the Grand Army of the Republic, and Major General John Logan chose the date: May 30, for he believed on that date flowers would be in bloom all across the country. This set the date for Memorial Day for the next century.

Memorial Day has also become our American unofficial start of summer, especially now that it is part of a long weekend, a change that took place in 1968 with the passage of the Uniform Monday Holiday Act. The holiday is now a moveable one, celebrated each year on the last Monday of May. This year, however, things work out that we get to celebrate Memorial Day on the day that Major General John Logan intended, which is kind of nice, no? Flowers are in bloom across this great country this 30th of May. It is a good day to remember all who died in service to this country and for all that blooms within it.