La Quaresima, or Your March Book of Days 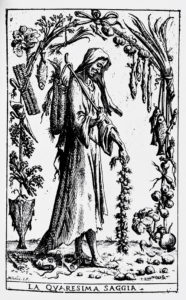 And now it is March, and here is your printable Convivio Book of Day calendar for the month. It is the month of spring in the Northern Hemisphere, and the month of lent. Forty days, not including Sundays, and they cover March from start to finish. It is the month of many famous saints’ days: St. Patrick’s Day, and St. Joseph’s Day, and St. Urho’s Day, and at the start on this First of March, St. David’s Day, sacred to Wales. The first few days of March that follow St. David’s Day are given to saints who are ancient and largely forgotten here on Earth: St. Chad on the Second of March and St. Winnal on the Third. The three days taken together play a part in old weather lore. St. Winnal’s Day especially is generally expected to be particularly stormy:

But since it is St. David’s Day today, and since it is a Sunday, it’s a good day, I feel, to make Welsh Cakes, which is what I’m planning to do. Here is our recipe:

It’s not uncommon to find recipes for Welsh Cakes that call for regular granulated sugar, butter, and nutmeg, but the traditional recipe will add lard to the mix, use caster sugar in place of the regular sugar, and will be flavored with the more mysterious flavor of mace. If you want the best Welsh Cakes, stick to the traditional version. If you can’t find caster sugar, make your own: pulse regular granulated sugar in a blender until very fine. Do not use powdered confectioners’ sugar, which has added corn starch.

Whisk together the flour, caster sugar, baking powder, mace, cinnamon, and salt in a mixing bowl, then work in the butter and lard with your fingers until the mixture has the texture of course crumbs. It’s ok if some larger chunks of butter remain. Mix in the currants. Add the beaten egg, working it into the mixture, adding just enough milk to form a soft dough that is not too sticky. Wrap; chill in the refrigerator for 30 minutes or until you are ready to make the cakes.

Turn the dough out onto a floured board and roll to a thickness of about ¼”. Using a biscuit cutter (scalloped, if you have one), cut into rounds. Gather up any remnants to roll out again and cut more cakes.

Heat a lightly buttered skillet (cast iron works great) over low to medium heat, cooking the cakes until each side is lightly browned (about 3 to 4 minutes… if they’re cooking quicker than that, lower the heat). Let the cakes cool for a minute or two, then set each in a bowl of granulated sugar, allowing sugar to coat both sides and the edges. Best served warm, split, with butter and jam, or, for a more savory treat, with cheese and leeks––leeks being one of the traditional Welsh symbols of this day, along with daffodils.

As for la Quaresima, that is the Italian for lent, and it is such a beautiful word, especially placed against our stark and spare word of only four letters. It rolls off the tongue like a flower: Quaresima. Her symbol in Italy is an old, thin woman, the opposite of the rotund man with a necklace of sausages around his neck, who is the symbol for Carnevale, the time we have just left behind last week with the start of Quaresima. She is known as La Vecchia, and we have made her this month’s cover star. She is here to remind us, like lent does, that our time on Earth is short. So make the most of it. Love each day.

2 thoughts on “La Quaresima, or Your March Book of Days”