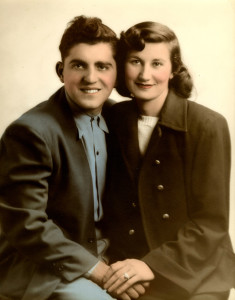 Memorial Day has always come prepackaged with bonus material for my family, for it was the Sunday of Memorial Day Weekend, 1949, that my mom and dad got married––two good looking kids from Brooklyn, tying the knot in the company of their family and friends at St. Blaise, the Italian neighborhood church, with a football reception afterward at Livingston Manor in Downtown Brooklyn: piles and piles of sandwiches, “football” referring to the idea that folks would toss the waxed paper-wrapped sandwiches across the room. “Hey,” someone would shout, “send me a capocolla!” and indeed, someone would toss a capocolla sandwich his or her way. How great is that? Sandwiches flying (and maybe being intercepted), mountains of homemade cream puffs, and trays and trays of Italian cookies, mounded in pyramids, wrapped in cellophane. There was beer and soda and Grandpa’s homemade anisette. “We didn’t want a fancy reception,” Mom said, “but we wanted good music.” And so the Roy Rogers Orchestra played all evening and people danced and danced and certainly at least one or two of those dances were traditional Italian tarantella dances, and they played the Grand March, too, as everyone got up off their seats and marched around the hall. Mom and Dad’s wedding song was an old tango called Jealousy. I asked if they learned to dance the tango before the wedding; they did not. They just heard the song in a movie, and despite the name, knew it was theirs. There was a big fight between them the night before the wedding––it was something about mustard––but all was smoothed out by morning and the rest, as they say, is history. No wedding planners, no destinations, not even a cake; just mountains of waxed paper-wrapped sandwiches and homemade cream puffs and Italian cookies. Now that’s a wedding.

This year their anniversary fell on Saturday, the day Seth and I often head over to help out with chores. And though my dad is gone these four years now, still, when my phone conversation on Friday with my mom and my sister turned to What should we eat tomorrow? a decision came quickly: Let’s have sandwiches, and let’s have Italian cookies, and my sister said, “I’ll make the cream puffs.” It was a just right day. My nephew and his family happened to drop in just as we were finishing our sandwiches. We put two big pots of espresso on. We laughed, Mom told stories about the wedding, we listened to the Harry James version of their song, Jealousy, and we pictured Mom and Dad dancing to the song at the Livingston Manor while imagining Morticia and Gomez Addams dancing to it, as well, Morticia clutching a red rose in her teeth, because it starts with that tango sound before moving into fox trot territory. We had such a nice time. And when I kissed Mom goodnight and gave her a hug, she said, “Thank you for my anniversary party.” 72 years ago and still these things warm our hearts.

Memorial Day is special to my family, but it is special to many. As a nation, it is the day we remember our fallen heroes, those who gave their lives in service to their country. But it is one more day where we just remember, plain and simple, all who have come and gone. Memorial Day (or some version of it) is celebrated not just here in the United States, but in other countries, as well, and usually at this particular time of year. It is a tradition that harkens back to Ancient Rome. The day here in the States was known earlier on as Decoration Day, and the Memorial/Decoration Day traditions in this country go back to the Civil War era. The original date, May 30, was chosen for it was believed that flowers for decorating graves would be in bloom in every state of the Union on that date. It’s since been moved to the last Monday of May. This year it falls on the 31st, the very last day of the month. It is our unofficial start of summer here in the US, but a somber one if we honor the day in its proper tradition. And so we decorate, and we remember. And we tell stories. And for some of us, we eat sandwiches and cream puffs. Flowers and stories and all these things for remembrance, beckoning summer and the gentle time of year.