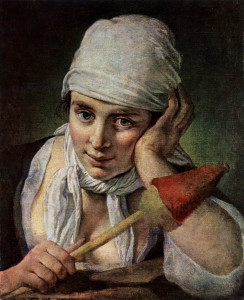 Christmas is past and now it is back to the ordinary workaday world. In older times, folks would cease most all work during the Christmas season, days considered outside of ordinary time. And here, on the heels of Epiphany, would come a number of traditional back-to-work holidays. The first comes today, and it is named for a saint who never did exist; rather, St. Distaff’s Day is named for a tool––one of those implements of the ordinary workaday world. Robert Herrick, one of our old favorite poets, wrote about St. Distaff’s Day in his 1648 book Hesperides:

The distaff and the spindle were the common tools of spinning flax into cloth (the spinning wheel came much later), and with St. Distaff’s Day this day after Epiphany, the women were back at their spinning. There was a more common division of labor back then, of course. Any woman who spun thread (and that would have been most women in earlier times) would know the distaff well. Some trivia for you to impress people at parties: Spinning was so associated with women’s work that the word spinster, which is happily not much used these days, once was a recognized legal term in England to describe an unmarried woman, and the terms spear side and distaff side were also legal terms to distinguish the inheritances of male and female children.

The men were not back at work in the fields until Plough Monday, which always falls on the Monday after Epiphany. And with the men still underfoot in the house, their job on St. Distaff’s Day seemed to be a mischievous one: their goal usually was to set fire to the flax the women were spinning. The women were wise to this custom, though, and typically kept several buckets of water nearby. Very often, it was the men who got the worst of it: to have a bucket of water dumped on you in the cold of January… for sure, St. Distaff’s Day lent a bit of excitement to the idea of returning to ordinary time. But this is the whole point of both St. Distaff’s Day and Plough Monday: yes, we may have to get back to work, but why not do it with a bit of ceremony and fun?