Waffles & the Measuring of Days 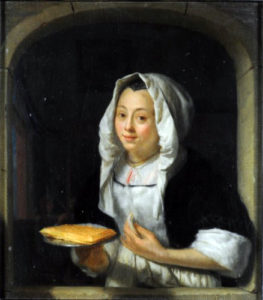 Who knew, when it began, that 2020 would become the year of small pleasures? With the 25th of March, I can offer you a small pleasure we can all rally around: waffles. The 25th is Lady Day, the Feast of the Annunciation. And through a matter of linguistic misunderstanding, the day has become known as Waffle Day. That part I’ll explain later. For now, though:

Waffles have a very long culinary history. If we’re being loose about definitions, we can take their provenance all the way back to Ancient Greece, where savory flat cakes were cooked between heated plates. There is a connexion, too, to the communion wafers that nuns make for churches (and certainly some shared etymology in the words wafer and waffle). But the classic cake that we think of when we hear the word waffle was a staple in many parts of Europe for centuries, and especially in the Netherlands, where waffles developed their distinctive honeycomb pattern in the 13th century. The Dutch cooked waffles quickly on heated patterned irons… and still we cook waffles this way today.

The “Belgian” that we so associate with waffles today is not so much an origin story as it was clever marketing: one of the food vendors at an early 20th century World’s Fair was a waffle maker who made and sold his waffles and rather than offer his customers forks and knives, he showed them how to eat them the same way his Belgian mother taught him: out of hand. It was a bit of a novelty, so he gave them a new name: Belgian Waffles. Clever guy.

Now, back to Waffle Day. The 25th of March brings an important religious celebration––the Feast of the Annunciation, also known as Lady Day––and in a strange twist of linguistic fascination, it has become a traditional day for waffles. For this tradition, we traipse from the Netherlands across Germany and Denmark, bound for Sweden, where Lady Day becomes Our Lady Day, or Vårfrudagen. Which, as luck would have it, is awfully close in both spelling and pronunciation in some Swedish dialects to Våffeldagen, which means “Waffle Day.” As a result, Swedes, for centuries, have been eating waffles on the Feast of the Annunciation, which marks the day that the angel Gabriel came to Mary to deliver the news that she was to bear a child, a son, and that that child would be the light of the world, the son of God.

It was a day of high significance in ages past: For centuries, throughout Catholic Europe, the Feast of the Annunciation on March 25 was considered the start of the new year. Even Ancient Rome celebrated the new year at the spring equinox. But eventually the original Roman calendar, used for centuries, fell out of sync with realtime astronomical events. Time is a tricky thing. We know it’s there and that it spirals on and yet its measurement in hours and days and years is a construct that we invented. And so Julius Caesar, when he instituted the Julian calendar that was designed to correct the original Roman calendar, set January 1 as New Year’s Day. This he did in honor of Janus, the Roman god who looked backward and forward, into the past and into the future. Things continued on this way for many more centuries until the medieval Church, which saw things differently from Rome, moved New Year’s Day back to March 25, in concert with Lady Day.

But even the Julian calendar was flawed and as the centuries passed, this became strikingly apparent. Easter was falling out of sync with spring. In 1582, Pope Gregory XIII introduced the Gregorian calendar, which reformed the Julian calendar and corrected its miscalculations. It is the calendar we use to this day, much more accurate and in sync with the sun, although it still drifts a bit with meanderings that are corrected by complex rules (for instance, only millenia years that are divisible by 400 include leap year).

With the adoption of the Gregorian calendar in 1582, October 4, 1582 was followed by October 15, 1582 (a necessary step to put the calendar back in its proper season). Pope Gregory also moved New Year’s Day back to January 1. It seems folks were still celebrating the old Roman date anyway, at least popularly if not officially, and this move made New Year’s Day official.

But all this reform, coming from a Catholic pope, was not welcome in Protestant England; Queen Elizabeth was not about to take orders from Rome about how her days were to be measured. England (and her colonies in America and elsewhere) continued with the old Julian calendar and continued marking March 25 as the start of the new year for nearly 200 years more, until Parliament passed the Calendar Act of 1750, and in 1752, January 1 became the official new year and Wednesday, September 2, 1752, was followed by Thursday September 14, and we begin at this point and for a long while after to see British and American almanacs listing the dates of holidays and including their Old Style dates, as well.

It all gets very muddy and confusing. And, to be honest, much more than I ever cared to tell you about. But hey, here we are, confined to our homes with time on our hands. Calendars seem almost unimportant these days, no? I suspect most people felt the same way in earlier, simpler times. As long as the church in town rang its bells to help us keep track of our days, what matter was it to the rest of us what time it was or what day?

Aside from the waffles and aside from the Christian celebration of the Annunciation, the traditional March 25 date of this holiday has long held significance in the calendar. The 25th came on the heels of the Vernal Equinox: a time of new beginnings. The equinox still today brings the traditional Persian new year, Nowruz, a celebration that has only ended but a few days ago. But the 25th of March has long been considered a mystical day in Judeo Christian tradition. It was considered by many through history as the first day of creation, the day of the expulsion from Eden, the day the Israelites passed through the Red Sea, the day of the beheading of John the Baptist, and the day of Christ’s crucifixion.

All this in the midst of lent, our annual season of penance and reflection. It was Laetare Sunday this past Sunday. Clergy were saying mass to cameras in most places, not people, but if you saw them they were dressed in rose vestments. Laetare Sunday marks the midpoint of lent, a pause in the somberness. Purple, the color of lent, is replaced by rose. In the UK, it was Mother’s Day. Midlent there is traditionally a Sunday to visit your mum and bring her a simnel cake. Again, a pause for joy.

Lady Day offers us a bit of that, too. We may be nine months to the Nativity but we are nine months, as well, to the Winter Solstice. In the cyclical year, this is the season of opening and rebirth. The open earth receives the seeds that burst forth into new growth. Mary conceives her child at this season magically, having “known not a man,” just as the earth goddess of the old ways did at this same time of year. And so the Vernal Equinox brings both rebirth (the Green Man, leafing out in plants across the landscape) and conception (the Sun Child, who will be born at the Winter Solstice). The connections between Pagan and Christian roots are deep indeed and this, perhaps, is just as it should be: all our history, bound up together into one very long, fascinating spiraling story. Sometimes that story says, “Here: stop, have a waffle.” No need for forks or knives.