The Legend of La Befana 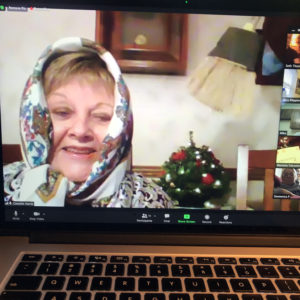 ELEVENTH DAY of CHRISTMAS
Twelfth Night, Eve of the Epiphany

Say what you will about 2020… an awful year, to be sure, but a lot of good came of it, too. One Sunday in March a few of my cousins gathered together on Zoom for a virtual gathering, just to visit, just so we could all make each other happy. It’s continued every Sunday since, and grown to include cousins I’ve never met in person, from Atlantic to Pacific and across the ocean, too, to Italy. Zoom Fatigue? Not when you’re with this group.

Last Sunday’s Cousins Zoom included my cousin Marietta reading a story about la Befana, the kindly old witch who brings presents to children in Italy on Twelfth Night. Her sister, my cousin Cammie, acted out the parts as Marietta read the story. And there’s Cammie in the photo above, the kerchief on her head signifying that she is la Befana, her broom for sweeping nearby. Each year my cousins in New York and New England gather for their Little Christmas party on or around Twelfth Night and Epiphany, and each year, la Befana makes her appearance, along with the three kings, all played by other cousins of mine. Alas, no Little Christmas party this year, but I finally got to see Cammie acting out her role. It was just beautiful.

La Befana is our signal that we’re coming to the close of Christmastide. With her broom tonight she will sweep away what’s left of our celebration, leaving the Twelfth Day of Christmas tomorrow open for the Magi and the Epiphany, which is a celebration even older than Christmas itself, marking the day those three old men arrived at the stable to worship the child who was born on Christmas Night. The Church celebrated Epiphany years and years before it began celebrating the birth of Christ, and somewhere along the way, in my family, at least, it picked up the nickname “Little Christmas.” Natalie Kavanagh, a Convivio Book of Days reader, wrote some years ago to tell me that where she comes from, on the Outer Banks of North Carolina, the day is known as Old Christmas.

But tonight, the Eve of the Epiphany, brings Twelfth Night. It is a cause for celebration that unfortunately doesn’t gather much attention here in the States, but what a lovely custom it is. We have been known to host a big dinner party for family and a few friends on Twelfth Night or Epiphany (an event that obviously won’t be happening this year). In some places, Twelfth Night and Epiphany are celebrations that rival Christmas itself. And why shouldn’t it be so? We spend so much time and energy preparing for Christmas. Is it not right and good to send Christmas off with a bit of ceremony? This is the value of Twelfth Night and Epiphany. This is the value of Little Christmas, and of Old Christmas. They are celebrations that provide us with a sense of completion.

But if all this sounds unbearably sad (especially after such a rough year) and if you, like us, are among those who dearly love the season, I can offer some solace, for while Twelfth Night and Epiphany may come and go, there is yet another old tradition that keeps Christmastime––the music, the stories, the festivity and lights––going all the way to the start of February. As Seth and I have grown older together, this has become the tradition that we follow, a custom that has strong ties to old Pagan traditions. The First of February brings Candlemas Eve. As celestial mechanics go, this is the night that winter begins to give way to spring, for we reach the midway point between the winter solstice and the spring equinox. Yule gives way to Imbolc in the seasonal round of the year. And by Candlemas Eve, the 17th century poet Robert Herrick tells us, all traces of Christmas greenery must be removed from the home (…how many leaves there be / Neglected, there (maids, trust to me) / So many goblins you shall see).

As people more interested in wholeness and balance, these are the ways we follow, fully realizing they are not for everyone. Mind you, a lot of our Christmas decorations will be down before Candlemas Eve. Robert Herrick did not have modern Christmas decorations to contend with; just greenery from the natural world. And by Candlemas Eve here, we are most likely down to just things from nature, too. That night, we will return to nature what is hers.

As for the legend of la Befana… I will save that story for Epiphany, tomorrow, when you will finally have enough of me and all this Yuletide stuff. If I could, I’d have my cousin Marietta tell the story, while my cousin Cammie dramatizes the part. Instead, you’ll just get me, doing the best I can.

12 thoughts on “The Legend of La Befana”