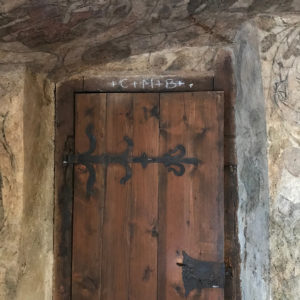 I know, I know: the title of this chapter of the Convivio Book of Days looks more like part of an algebraic equation than the start of a piece about the Twelfth Day of Christmas. It’s actually an inscription, one that we will be writing in chalk on the lintel above our door tonight. It is Epiphany: the day that tradition tells us the Magi arrived at the stable to see the newborn child. It is the part of the Christmas story that expands it to the world beyond Bethlehem, for the Magi came from afar to see this miracle, and brought the news with them back to their lands. Seeing the child was their great epiphany, and in turn, ours.

They are known as Caspar, Melchior, and Balthasar, those three wise men, and it is their initials, surrounded by the new year, that make the inscription that we will write above our door. It’s a tradition taught to my family by Father Brice, who would bless chalk and give it out to his congregation at St. Paul’s in Lighthouse Point each Epiphany Mass. I’ve never known anyone else to follow this custom but Father Brice and my family, but two summers ago––when Seth and I traveled to the part of Austria where a half hour drive could find you in Switzerland or Germany or Lichtenstein, depending on which direction you were going––we saw so many doorways inscribed, both indoors and out. The doorway in the photo today is the door to the chapel at Schattenburg, the 13th century castle that looks out over the City of Feldkirch in Austria. I photographed an awful lot of doorways that trip. Surrounded by so many lintel inscriptions, I felt like I was amongst people I understood, and who understood me.

The holiday itself is older even than Christmas, as holy days go. It is one of the earliest celebrations of the Church. In some places, Epiphany rivals Christmas––especially in Latin America, where the Three Kings made their rounds last night, delivering presents, just as they did that first Christmas. They stop on their way through Italy, too, to invite la Befana, the kindly old witch, to join them. As usual, she was far too busy with her housework, which, in my experience, is usually the way things go. (My family is full of Befanas, women and men who get so wrapped up in making sure their houses are as clean and tidy as possible, and I’ve no doubt they would have declined the invitation of the Magi, too.) But that first Christmas, when la Befana told the Magi to carry on without her, she eventually grew remorseful for not joining them… and so she set out to find them. Alas, it was too late. She never found the three kings and she never found the child, and so each Twelfth Night, even to this day, she rides out on her broom in search of them all. As she searches, she leaves presents in the shoes of good children. (Not so good children? They get coal, but even that isn’t so bad, because la Befana’s coal is sweet as candy.)

It is la Befana’s job to sweep away Christmas, too, for another year. Before she does, though, you will find us outside on the porch with a stepladder and a piece of chalk (no longer blessed, for Father Brice is long gone). We do this here at our home, and we’ll do it at the family home, too, when next we are there. All who are gathered will take turns writing the inscription on the lintel above the door: it is, as I said, the initials of the wise men, blanketed on each side by the year, punctuated with crosses: 20+C+M+B+21. Each year, my silent prayer outside in the cold night air is that no one will be missing when we next gather to do this. There the inscription stays, all the year through if the weather be fine. And though Christmas be gone, still the inscription reminds us of Christmas’s presence as we pass each day through that portal. The inscription is a magic charm of sorts, protecting the house and those who pass through that doorway, harboring the goodwill and spirit of Old Father Christmas.

And while I promised that you’d be rid of me now, after twelve continuous days of writings, the fact remains that tomorrow brings another Christmas-related holiday: the 7th of January each year brings St. Distaff’s Day, the first of the Back to Work holidays on the heels of the Christmas season. It’s too fascinating to not discuss… so if you have room in your hearts for one more visit from me this week, I will do all I can to be there. And so be it.

I’ll be talking about these things and showing some good books, too, today at 3 PM Eastern on a Jaffe Center for Book Arts webinar called Book Arts 101: Caravan. You have to register to watch the live broadcast on Zoom: click here to register. There will be a simulcast on the Jaffe Center’s Facebook page, too. And on Friday, from 2 to 5 PM Eastern, you’re welcome to join me again as I host the Real Mail Fridays St. Distaff’s Day Social. Come and go as you please; most folks joining in will be writing letters, but sometimes I do other things, like bind books. There is good music and lots of quiet working time in the company of others, and once or twice an hour, we break for a some focused conversation.