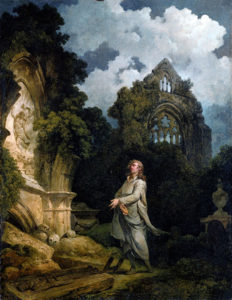 Venice is home to St. Mark’s Basilica and to the Piazza San Marco, St. Mark’s Square, and to the relics of St. Mark the Evangelist… or at least most of them. The relics of saints often end up a bit scattered, and to read the story of Mark’s relics––stolen from Alexandria in the ninth century by Italian merchants, brought to Venice, lost during the construction of the new basilica, revealed again only by the saint’s intercession (he apparently appeared and pointed to them from a pillar, like “Eh, look over there!”)––well, it’s easy to imagine that the poor guy’s bones may be here and there and all over the place. Saints rarely have an easy time of it.

Be that as it may, in Venice on St. Mark’s Day, which is tomorrow, the 25th of April, many rosebuds will be exchanged. This custom actually has little to do with St. Mark; rather, it comes from an old story of love lost: In the eighth century, not all that long before those merchants set sail for Alexandria to steal the relics of St. Mark, there lived in Venice a troubadour of humble means named Trancedi, who fell in love with the doge’s daughter, Maria, and Maria was equally enamored of the troubadour. The doge, however, was not pleased that a man of so low a social standing was wooing his daughter. And so Trancedi went off to war in a distant land, in hopes of returning triumphant, thereby impressing his potential future father-in-law. And Trancedi did really well for himself, but, alas, just before he was to return home to Venice, was mortally wounded in battle, and in his last moments, fell upon a rosebush. He plucked a single rosebud and gave it to his friend Orlando, who was at his side, and asked Orlando to bring the rosebud to Maria. He did. She received the blood-stained flower, and the news of her love’s fate, on St. Mark’s Day, the 25th of April, and that night, she died upon her own bed, holding Trancedi’s rosebud, a symbol of love eternal. And to this day, rosebuds are exchanged in Venice on St. Mark’s Day.

For dinner, most will eat a simple dish: risi e bisi in the Venetian dialect: a soup of rice and peas, in years past brought with great ceremony to the doge. Peas as a symbol of spring, rice for abundance. The day marks, as well, Liberation Day throughout Italy: the Festa della Liberazione. It is a national holiday, marking the day in 1945 that ended the Fascist regime and the Nazi occupation of Italy.

But all of this is in Italy and all of this takes place tomorrow, on St. Mark’s Day. In England, distinctly different traditions have evolved for St. Mark’s Day, all of them taking place on the eve, which is this night, the 24th of April. It is a night for divination. There are those who will wish to learn about matters of the heart, and for them, here is a traditional spell: Fast from sunset on St. Mark’s Eve and during the night, bake a cake that contains an eggshellfull of salt, wheat meal, and barley meal. Set the baked cake to cool on the table and leave the door to your home open. Sometime over the course of the night your future love will come in and turn the cake. You’ll just need to stay awake to see who it might be. Also, just as at Halloween, there is as well a long standing tradition of divination by nuts on St. Mark’s Eve. Young women would set a row of nuts on the hot embers of the hearth, one for each girl. Each would breathe the name of her intended into the hearth and if the love was to be true, the nut would jump away as it got hotter. But if the nut sat there and was consumed by the fire, the love was not meant to be:

If you love me, pop and fly,
If not, lie there silently.

The most famous divinations for St. Mark’s Eve, however, are distinctly dark and macabre. If your curiosities run in this direction, and if you’ve not already set the wheels in motion, you will need to begin now for a divination event that will occur three years from tonight. For this and for the next two St. Mark’s Eves you’ll need to fast and then spend the hours between 11 PM and 1 AM sitting on the porch of a church. Come the third year, in that witching hour, you should see a procession pass before you of the shadows of all who will die in the coming year, as this excerpt from a poem by James Montgomery suggests:

‘Tis now, replied the village belle,
St. Mark’s mysterious eve,
And all that old traditions tell
I tremblingly believe;
How, when the midnight signal tolls,
Along the churchyard green,
A mournful train of sentenced souls
In winding-sheets are seen.
The ghosts of all whom death shall doom
Within the coming year,
In pale procession walk the gloom,
Amid the silence drear.

The poem is titled “The Vigil of St. Mark” and it is based on the old folk customs for this night. The watching is for two hours, and it is said that those apparitions, or wraiths, who enter the church in the early hours of the watch will die first; those who enter later, toward the end of the watch, will die later in the year. Those who approach the church and pause to gaze into the windows will become ill in the coming year, but they won’t die. There are tales––quiet tales told in whispers in darkness, the ones that cause neck hairs to bristle––of those who have practiced the spell and seen their own wraiths and have died within the year of their watch. As for me, I plan to be asleep in my warm bed this St. Mark’s Eve at that dark hour. There are things I do not care to know: a foretelling of all who will leave this earth in the year to come, the whereabouts of the relics of St. Mark the Evangelist. Give me instead my soup of peas and rice, and I will be content.

3 thoughts on “The Legends & Mysteries of St. Mark’s Eve”