6 Comments
By John Cutrone Feast of the Guardian Angels

Walk Us Through This One 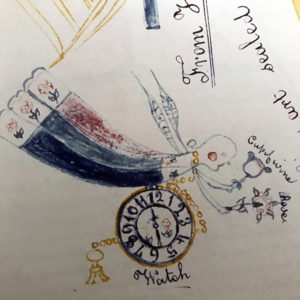 It was Michaelmas a few days ago, but come the Second of October we reach an old old holiday, a feast of the Church little known today but an important one, I think; one that goes back to the Fourth Century. It’s the Feast of the Guardian Angels. While Michaelmas at the end of September celebrated St. Michael the Archangel and all his companions, this feast is of a more personal nature. Guardian angels are like that, no? They take care of us on a one-to-one level.

Believers back in the Fourth Century and for many centuries beyond would build altars in their homes on this day in honor of their guardian angels. Do they exist? Well, that is a matter for each of us to decide. I have more than once felt protected in ways that may just be coincidental but that also seem strangely beyond coincidence. Both situations involved automobiles. There was the time Seth and I were driving north through Georgia through incessant rain and found ourselves, in a strange slowdown of time, on the other side of an accident that involved multiple vehicles. It was all intense calmness and Jane Siberry was singing “Old Man River” or “Swing Low Sweet Chariot” and I managed to drive us around the chaos outside our bubble as it all unfolded. Seth had been thinking of his grandparents at the time and later said he felt serenely protected. And on my own, there was the random driver years ago who pulled in front of me on the road and slowed me down just long enough to protect me from the driver at the intersection ahead of us both who blew through a stop sign. He certainly got an earful from me as he pulled in front of me, but were it not for him, I would have been broadsided by the car that did not stop. It does seem at times like I get through life with a measure of help from people just like this. What if it’s always the same person? A guided meditation many years ago, on this very subject, revealed a name to me: Pedro. Since then, I have a feeling it is Pedro who watches over my blunderings and intercedes when necessary.

As we learnt at Michaelmas, angels appear in belief systems throughout the world: all the major religions and then some. They typically appear as bright and shining beings, winged… but I don’t think that’s necessarily the case. I think they blend in with the rest of us, doing their work as needed. Perhaps driving slowly in cars and getting in our way, when necessary.

My mother, whose birthday we always celebrated on October 3rd, seems to actually have been born on the 2nd. I don’t know what was going on in that house she grew up in, but there were all kinds of mix ups about birthdays. This latest one was revealed to us only recently. If she was indeed born on October 2nd (and official records seem to suggest she was, despite a lifetime of October 3rd birthday parties), then she was born on the Feast of the Guardian Angels. That’s a pretty good date to enter this world, I’d say. My dad, too, had an angelic connexion: he never went by his real name––he found it a little too ethnic when he was a boy––but his parents named him Angelo, which, of course, is Angel. He comes from a long line of Angelos and Angelas and even Arcangelos and Arcangelas.

No matter your beliefs about angels, one thing is certain: they are a constant, even today, in our culture. Paintings, films, stories, songs. Jane Siberry captures the guardian angel spirit best, I think, in her song “Calling All Angels.” The original was a duet with fellow Canadian k.d. lang, recorded for Jane’s 1993 album When I Was a Boy. It is perhaps Jane’s best known song, and yet she never made an official video for it. It has, however, been recorded numerous times on mobile phones during concerts, and this year, I’ve found a new version to share with you. And so here is Jane Siberry with k.d lang singing “Calling All Angels” at the Secret Society in Portland, Oregon, December 6, 2014. That was St. Nicholas’s Day… but that’s another story, for another time.

Image: When you get right down to it, angels figure in so many of my favorite things. Here’s a detail from a Shaker gift drawing by Sister Miranda Barber, 1848. The Shakers who made drawings like these believed they acted simply as the medium through which the images were sent from heaven… hence the idea that the drawings were gifts.

6 thoughts on “Walk Us Through This One”