Wrapping Up a Bookish Week 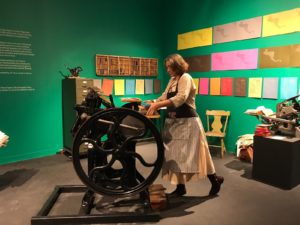 Celebrations of the bookmaking craft began early this week, with the Bartlemas Wayzgoose on the 24th of August, and today, the 28th, we come to another bookish celebration: it’s the Feast of St. Augustine of Hippo, patron saint not just of printers…. Ah, but also of brewers. That’s a heady combination. As a printer myself, I have known many printers in my life; most of them are quite fond of beer and many of them, like myself, have dabbled in brewing. To have a day bestowed upon us that celebrates both of these things, well… it is clear that printers have long had two reasons to celebrate these waning days of summer. (And it is perhaps not the best week to take a delicate job to your local print shop.)

St. Augustine is a patron saint of printers and of brewers, and he is also the patron saint of Aviles, the city in Spain that was home to explorer Pedro Menéndez, who sailed to the New World in 1565. The day his ships arrived here at this continent also happened to be St. Augustine’s Day, the 28th of August. He and his crew sailed into the area around Matanzas Bay, up in the northeast corner of La Florida, and he named the new Spanish settlement there San Agustín, in honor of the day he first spotted land and in honor of his hometown’s patron saint. That town is St. Augustine, the oldest continuously occupied settlement of European origin in the United States.

As for St. Augustine himself, he was born in Northern Africa, in what is now Tunisia, in 354, the son of St. Monica. He became a patron saint of printers thanks to his prolific writing. Books like his Confessions probably kept a lot of early printers in business. The confessions were easy to come by for Augustine: he was a fellow who liked a good time, at least early on in life, and this is the root of his patronage for brewers. His mother prayed for his conversion. Eventually he did convert and he began to write. He was long considered a Doctor of the Church and was canonized at the turn of the 14th century, about 150 years before Johannes Gutenberg perfected the idea of moveable type and ushered in the information and literacy revolution that came with the proliferation of printing. It is said that on a wall of his room St. Augustine had written these words, in large letters: “Here we do not speak evil of anyone.” Words of wisdom, worthy of writing on our walls or printing on our presses or sending to our elected officials, and words to live by in this week of celebrations print and book related––this week of Wayzgooses and related celebrations of papermaking, printing, bookbinding, brewing. All crafts of the human hand and heart, all, in their way and in proper doses, portals bridging earth and heaven, assisting us mere mortals to attain that graceful state of happiness in flow. I’ll take that.

Speaking of the Bartlemas Wayzgoose: now that the hustle and hubbub of the premiere of our Library Wayzgoose Festival has passed, we welcome you to watch it anytime, from wherever you are in the world. The online event video is posted for now to the website of the Jaffe Center for Book Arts, and if you happen to be reading this months or years from now, you’ll find the Wayzgoose posted, for posterity, at the Jaffe Center’s Vimeo Channel. I think you’ll really enjoy it: it’s chockfull of interesting bookish information, as well as some pretty breathtaking music by the Lubben Brothers, and you’ll even find me singing a little song, penned by my printer pal Vanya Gulkov, called the “Wayzgoose Wassail”––which sounds to me entirely like something that would go well with the handiwork of your local brewer. Cheers and huzzah!

Images: Above: Catalina Rojas printing on the Chandler & Price press she brought to Design Miami. Below: scenes from the 2020 Library Wayzgoose Festival: Catalina Rojas, proprietor of Puropapel; the Lubben Brothers; vintage film still in the Wayzgoose opening sequence; me, singing the “Wayzgoose Wassail.” 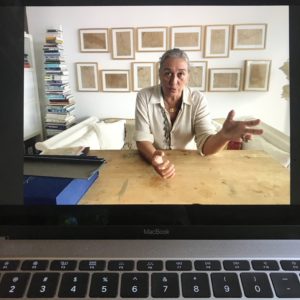 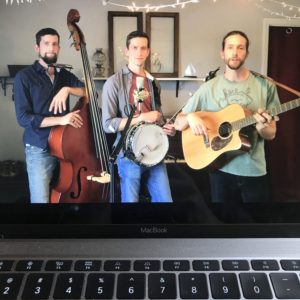 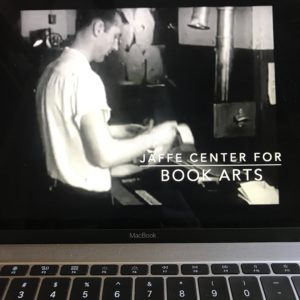 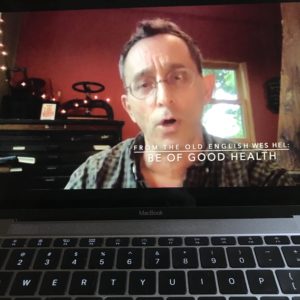