The League of Italian Grandmothers 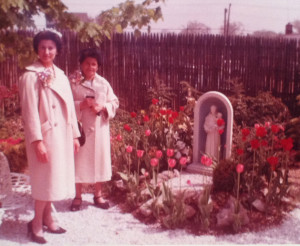 June 13 brings the Feast of San Antonio: St. Anthony of Padua, sacred to Italy. He is one of the more popular saints, patron saint of lost things. Here is a Convivio Book of Days chapter about this day you may have read before; so much about June this year has snuck up on me, and St. Anthony’s Day was no exception. And while I apologize about the reprint, I’ve also rewritten some of it and so it’s a bit improved, I think. I’m also unapologetic about loving this chapter and am pleased to bring it to you again as it features some of my favorite people with photographs, too, of a place I knew as home when I was a little boy. The photos were all taken in our backyard in Valley Stream, New York. I don’t know if that St. Anthony shrine is still there at the house on Victor Street, but my parents sold the house to the son of an old Italian friend who had helped my Dad and Grandpa build the house, and now the house belongs to that man’s son. With such a long line of Italian occupants, chances are good San Antonio is still there looking over things.

With the possible exception of the three years I spent in Alabama, I have always lived in places where it is common to see religious statues in front yards. St. Francis is one you see often. But if we’re talking about a statue of the Blessed Mother or of St. Joseph or St. Anthony, and especially if it’s enclosed in a little shrine, most especially if a spotlight is trained on the statue at night, well, chances are very good that these are my people. We Italians love our saints, and it’s hard to say which is most beloved… but surely a contender for that top spot would be San Antonio, St. Anthony of Padua.

He is a populist, a saint of the people, a saint you can talk to, one who will help you with trivial matters. Finding lost car keys, for instance, or anything at all you’ve misplaced… St. Anthony is there, ready and willing to come to your aid. Case in point: one Labor Day, on a family trip to the beach, when my nephew lost the same gold bracelet off his wrist not once but twice in the surf, my mother retrieved said bracelet both times after praying to St. Anthony. We’re talking needle in a haystack here, folks: crashing Atlantic waves, sand, wind. And to find it twice? Mom swears by St. Anthony’s helpful powers to find lost articles. You may even be familiar with the old children’s rhyme: Tony, Tony come around, something’s lost and must be found. If you’ve ever said that, it’s St. Anthony you’re invoking, and he’s all too happy to assist in your trivial worries. He is an all-around good guy and today, June 13, we celebrate the feast day of San Antonio.

What I remember most about June as a boy was Grandma sitting in a folding upright lawn chair in front of our statue of St. Anthony, which was in the backyard. Grandma always sat in the upright chairs; never a lounge or God forbid a sand chair at the beach (she’d never get out of one of those), and in June, her chair was there in front of St. Anthony and in her hands were her little prayer books printed at the orphanage of San Antonio in Italy that she supported and usually a rosary, as well. The folks at the orphanage would send her things, like those prayer books or, one Christmas, a little floppy record the children had made; we put it on the record player on the Hi-Fi and heard them sing “Tu Scende dalle Stelle,” the beloved Italian Christmas carol. But for St. Anthony’s Day and indeed for all these first thirteen days of June, she would sit there in front of that statue with her rosary and prayer books for what seemed to me hours each day. And very often she would have a friend over doing the same thing, a friend just like her, muttering prayers in Italian into the thick summer air.

They were saying their Tredicina to San Antonio. Tredicina as in thirteen. It is a prayer that is said for thirteen consecutive days starting on June 1, and there are variations of the Tredicina: it could be offered for St. Anthony’s general intercession in a problem in your life or it could be offered for no reason in particular or it could be offered even to help you find something, though one would think after thirteen days you might move on (the Tredicina does even offer this option as a viable suggestion: St. Anthony, perfect imitator of Jesus, who received from God the special power of restoring lost things, grant that I may find [name the item] which has been lost. At least restore to me peace and tranquility of mind, the loss of which has afflicted me even more than my material loss.)

My mother remembers this very same thing going on when she was a kid, but it was at Mamam’s house. Mamam was the neighbor. Back in 1926, when my grandmother was 9 months pregnant and thought it was time for the baby to arrive, she had Grandpa call the doctor. The doctor came, told her it wasn’t time… and then after he left, Grandma went into labor. It was Mamam who delivered the baby. My mother was that baby. So they were very close, all of them––my grandparents’ family and Mamam’s family. Back then, for these first thirteen days of June, Grandma would go to Mamam’s house to say the Tredicina to San Antonio, because Mamam had the big statue of St. Anthony in her home. Mom remembers many Junes when she was a little girl, popping into Mamam’s house and finding them there saying their prayers: Grandma, who could read, said the prayers, and Mamam, who could not, said the response: “Pray for us.” Mom was just passing through––coming by to say hello or maybe get a cookie or something. But then she was caught. “Millie,” they’d say, “come kneel down and pray with us.” There she was, roped into a situation she did not care to be in. Sometimes she’d sneak out quietly if she wasn’t noticed right away. The Tredicina to San Antonio: it’s not a prayer for the faint of heart.

St. Anthony was born in Lisbon in the late 12th century but spent most of his life in Italy. He was an early Franciscan: cowled brown habit, sandals, tonsured haircut. He is known for many miracles, one of the best known being his preaching to the fishes, who gathered in great numbers to hear St. Anthony speak. He preached to the fishes after trying first preaching to people, but they weren’t much interested at the time, so he took his lesson to a nearby body of water and found a more receptive audience… which then impressed the people enough that they began listening.

The feast day of St. Anthony is a day that, for me, always calls to mind Italian grandmothers, which were the only kind of grandmothers I knew as a boy. Occasionally I would meet a grandmother who wasn’t Italian if I went to a friend’s house after school, and I would be a little taken aback sometimes if their Grandma was tall or spoke good English. And one thing all of these Italian grandmothers seemed to have in common, whether they were my grandmothers or a cousin’s, was this devotion to St. Anthony. There may have been one summer day I recall when Grandma was joined by three or four of them, all saying their prayers, all sitting on folding upright lawn chairs, all muttering in Italian, lips moving just slightly, eyes fixed lovingly upon the statue of St. Anthony in his enclave in our little backyard.

The image above is of Mom and Grandma with corsages and fancy coats, posing near San Antonio, for my sister’s first communion, and below, that’s Grandma with one of any number of her friends, all Italian, and all of whom were referred to as “Cummara”. 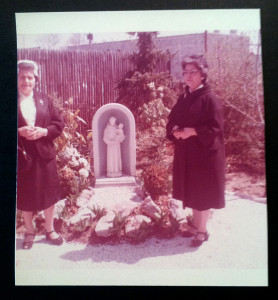