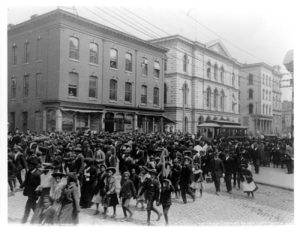 It is Juneteenth, a holiday named via portmanteau, a combination of June and Nineteenth: Juneteenth. It marks the day in 1865 when Union soldiers arrived in Galveston, Texas, and announced that slaves were now free and that all laborers were to be paid wages for their work. It is a day when we remember hard-earned freedoms. The day is also known, perhaps more properly, as Freedom Day or Emancipation Day.

How important is a day like Juneteenth? I doubt many of us think about it until we are faced with a strong reminder. Like this one, perhaps: an artists’ book by Ben Blount called Africans in America. It looks like a standard library book: a hardcover book with a buckram binding, the title stamped in gold lettering on the spine. It’s a thick book. A single year is printed on each white page, but a few of those pages are highlighted in red––four pages, to be exact. The book begins at 1619: the year the first Africans were brought to America as slaves. Year after year passes as page after page passes. Then we get to the next page highlighted in red. It’s 1865: the year of the Emancipation Proclamation. Again year after year passes as page after page passes. The next red page is 1964 and the passage of the Civil Rights Act. Again, year after year quietly passes until 2009, when Barack Obama, our first African American president, is inaugurated. “Racism is officially ended,” says the book at that page. We all know better. The book is extremely powerful in its minimalism, a visual testimony of all those years of oppression and all that whiteness through all those stark white pages. How do we get out from under the lingering effects of all that heaviness, all that history of slavery and Jim Crow segregation and disenfranchisement? We understand then why a day like Juneteenth is so important. Or why a Pride event is so important. Or a women’s march.

Juneteenth is celebrated mainly in Texas but is spreading more and more with each passing year. From its earliest days in the 1860s, Juneteenth became a day to celebrate those hard-earned freedoms and also a celebration of African-American culture, and a day for family and friends to gather. The road has not been an easy one, and so it is as well a day to reassure each other against adversity and challenge. The fact that the road is still being forged is all too evident these days, as we continue to work through our troubled history and find paths forward, paths toward real equality.