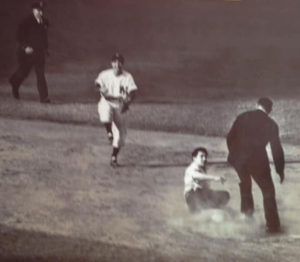 It’s Father’s Day. I was so lucky as a boy to have both Mom & Dad and Grandma & Grandpa––my mom’s parents––all in the family home. This is the way of my people. We Italians don’t disperse well; we gather: we gather for a good meal, we gather as a family, and we don’t strike out on our own so much as bring others into our fold. My husband Seth, God bless him: he knew soon after he met me, some twenty odd years ago, that he was getting not just me but my whole family, too: an entire clan. He seems to like this, but it’s no wonder: his grandmother was Italian, too. She married and became Emily Winter––a name that could belong to any good Daughter of the American Revolution––but her birth name was Tomassina Emilia Vacca, which is about as Italian as you can get.

And so it is that when I was a boy I had two fathers at home to celebrate each Father’s Day––my dad and my grandpa––which was pretty wonderful. There were plenty of others we celebrated, as well, for in my family we think of many people as family… not just mothers and fathers and blood relations but even friends of the family. Two years after my grandparents arrived in this country, their second daughter––my mother––was born. My grandmother, nine months pregnant, knew the baby was about to arrive, but when the doctor came, he told her she was wrong and he packed up his medical bag and went on his way… but a few minutes later Grandma went into labor and it was the next door neighbor, Philomena, who delivered the baby. And so all her life, my mother called her Mamam, for she was like another mother. Mamam had children, too. There was Josephine, and Nicky, and Frank, and there was Benny, who would bring me a toy every time he came to visit. We called him Uncle Benny. He would do things like throw pennies on the floor because he didn’t like them in his pockets, or put his little Pekingese dog in my playpen with me, or see my Aunt Anne & Uncle Joe off on their road trip back home to Chicago by getting in the backseat of their car and then hopping on a train back to Brooklyn once he knew they had reached their destination safely. I don’t think he even stayed for coffee.

When his wife Phyllis gave birth to their second son, Johnny, Uncle Benny decided he would ask Joe DiMaggio to be the godfather. Not that he knew Joe DiMaggio. But I guess Uncle Benny really liked Joe DiMaggio. He wanted to name the kid Joe, in honor of ol’ Joltin’ Joe, the Yankee Clipper, but Phyllis insisted they name him after her father, and he went along with that, Benny did. But he decided he wanted things his way with the baptism, and so on the 12th of June, 1948, during the 6th inning of the Yankees game at home in New York (Yankees vs. Cleveland), with the Yanks defending the field, Uncle Benny scrambled down from the stands at Yankee Stadium and and ran out to Center Field to ask Joe DiMaggio if he would be his son’s godfather. There are a bunch of newspaper clippings in the family scrapbook about this event, which made the New York Daily News, a sort of Keystone Kops adventure on the field, as Uncle Benny rushes to chat with Joe, is pursued by cops and umpires, then slides into second base before being apprehended and taken off to Bellevue Hospital. One headline reads: Nabbed but It Took 4 Cops and Ump. All the newspaper stories say that the perpetrator wanted Joe DiMaggio’s autograph. But we know better. Uncle Benny was family, after all.

Uncle Benny’s antics make for some of our family’s best stories, and my dad was one of the best tellers of Uncle Benny tales––all of which are true, even though they seem too fantastic to be so. Even generations who never met him, like my nephews, know the stories. They are legendary family lore. If we are lucky––and I know that I am––these are some of the best things we get from our fathers and our families. Happy Father’s Day. 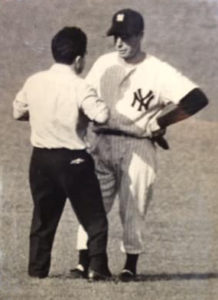 Photos: Here is Uncle Benny asking Joe DiMaggio if he’d be godfather to his new son. Joe declined, but at least gave Uncle Benny an audience. Above: That’s Yankee shortstop Phil Rizzuto slapping his knee as Uncle Benny slides into second base at the foot of umpire Cal Hubbard. Behind him, one of four cops in pursuit. Photo clippings from the New York Daily News, June 13, 1948.

The 16th of June also brings each year Bloomsday, a literary holiday based on the novel Ulysses by James Joyce. Click here for last year’s June 16 Convivio Book of Days chapter about Bloomsday.