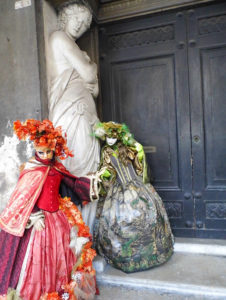 The Carnevale of Venezia, or the Carnival of Venice, began this year on the last Saturday of January and soon, on Tuesday, it will draw to a close. Tuesday brings Shrove Tuesday, or Mardi Gras in French––Fat Tuesday. There are certain cities that we think of as central to Carnival: certainly Venice, Rio de Janeiro, and New Orleans. But Carnival is a celebration that is known far and wide, especially through Europe and Latin America.

My family is not a Carnival people––it’s just not a tradition my grandparents brought with them from their Italian villages. But Carnival is important. It is the last great indulgence before the arrival of Lent, forty days marked by somberness and penitence––and, in times past, a time of strict dietary restrictions. Carnival season, in fact, takes its name from the Latin carne levamen–– “Good-bye to the flesh.” Traditionally, the supply of meat would be finished during Carnevale until spring, and so it truly was a goodbye to the flesh, and a farewell to the provisions of winter. The traditional symbol of Carnevale in Italy is a plump man wearing a necklace of sausages about his neck. It is in stark contrast to the traditional symbol of Lent: a gaunt old woman, all skin and bones.

In England and in the United States, Shrove Tuesday means one thing: Pancakes for supper. The meal is an easy way of using up all the eggs, milk, and sugar that remained in the larder before the 40 fasting days of Lent commenced. In Germany, the tradition for the Tuesday before Lent calls for doughnuts, and the night there is known as Fasnacht or Faschnacht. The idea is the same: using up all the remaining lard, sugar, and butter before Lent begins. But whether it is pancakes or doughnuts, there is something special about eating breakfast for dinner, or about eating homemade doughnuts after dinner. It’s a little something, nothing dramatic, just something that marks the day, something celebratory, reminding us of the importance of enjoying what we have. Once Ash Wednesday arrives, Lent will, for forty days, remind us of the brevity of things. The reality is we are very fortunate and we should do our best to remember the gifts we’ve been given… like this, another Mardi Gras, another Fasnacht, another Shrove Tuesday. And as they say in New Orleans, Laissez les bon temps rouler!

Image: “Festa delle Marie,” by a German photographer who goes by the name fotogoocom, was taken at the Carnevale of Venezia in 2015. Used with gratitude through Creative Commons via Wikimedia Commons.

One thought on “Fat Tuesday”