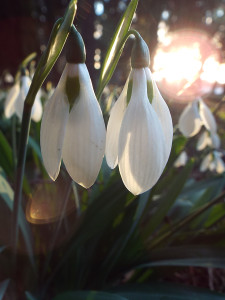 The wheel of the year is in constant motion, of course, turning always, and as we enter February we pass to the next seasonal spoke: Winter is still firmly in charge, but days are lengthening (and have been since late December) and it becomes apparent that spring, with all its lively stirrings, cannot be that far away. And in traditional reckoning of time, it is Imbolc, a Celtic cross-quarter day, that marks the beginning of those stirrings on this first day of the second month.

With Imbolc, we are now very close to the halfway point between the Winter Solstice of December and the Vernal Equinox of March. Beneath the ground and in the trees already there are signs of change: The buds of this summer’s leaves slowly grow fatter, roots begin to spread. The trees are not the only living things beginning to stir; animals are, too. The name Imbolc is derived from the word Oimelc, which comes from the Gaelic for ewe’s milk, for lactating sheep are now feeding the first lambs of the season. As milk flows, so soon will streams and rivers in colder climes, and once the ice of winter begins to melt, there’s no stopping the pull of life that begins to stream forth. And so even in these cold wintry days, we know that renewal is not far away. This is the spirit of Imbolc, and the value of Imbolc: knowing that warmth is returning.

The day is heavily infused in Celtic lore. The traditions of Imbolc are, for the most part, simple, quiet ones. Most prevalent in olden times was the making of a dolly from a sheaf of corn or wheat and laying it to rest in a bed, and there were divinations to be made from the ashes in the hearth. And as the year shifts from winter to spring, so does the Celtic earth goddess shift from crone to young virgin in the form of the goddess Brighid. The renewal of the goddess goes hand in hand with the renewal of the year.

The Church made the First of February the Feast of St. Brigid, who bridges us from winter to spring. (It is often called St. Brigit’s Day, but Brigid is more proper, and the pronunciation is distinctly Celtic: brigg-id or bree-id.) St. Brigid is sacred to Ireland and second there only to St. Patrick, whose day will come later this spring. She was said to have cared for Mary’s cows, and she was there to help at the birth of Jesus. Hence Brigid is known as Christ’s Milkmaid, and here is that connection to Oimelc. It is traditional today to make a St. Brigid’s cross, which looks a bit like a four-spoked wheel, out of rushes or reeds. It is also traditional to leave an oat cake and butter on a windowsill for St. Brigid on her day, for she is more likely then to visit your home and bless the people and animals who live there.

Imbolc, being an old Celtic holiday, became the basis for an important Christian holiday, Candlemas, which comes tomorrow. Candlemas Eve, however, has its own importance, for Candlemas traditionally marks the end of the Christmas season in the Church, and even in homes, it is on this night that all vestiges of the Yuletide celebrations must be removed.

If you can’t imagine living with plastic snowmen and sparkly ornaments so far into the new year, keep in mind that in earlier times (well into the 20th century), Christmas decorations consisted of things of the natural world: holly and ivy and mistletoe and other greenery. Remember also that the decorations went up on Christmas Eve, not earlier. So it was pretty easy to live with these festive things in your home through Candlemas, and they certainly brought as much joy to a home as any of our contemporary decorations do now. While the major festivities of Christmas ended with Epiphany, the spirit of the season remained and lingered and kept folks company for these forty wintry days. But it was considered bad luck to keep these things about the house any longer than Candlemas. Our old reliable 17th century Book of Days poet Robert Herrick describes the significance of the day in his poem “Ceremony Upon Candlemas Eve”:

Down with the rosemary, and so
Down with the bays and misletoe ;
Down with the holly, ivy, all,
Wherewith ye dress’d the Christmas Hall :
That so the superstitious find
No one least branch there left behind :
For look, how many leaves there be
Neglected, there (maids, trust to me)
So many goblins you shall see.

The shift in our celebration of Christmas will probably always perplex me. How we took a celebration that traditionally begins on the solstice and runs through Candlemas and made it into a fourth quarter corporate event that begins in stores in September and makes people weary of its presence by Christmas Day is, I think, a great disservice to us all. In our home we follow the old ways as closely as we can. We may seem out of step with the rest of the world, but the rest of the world is not necessarily where we want to be, anyway. Home is a refuge for us and for sacred ceremony, and we rather like it that way. And so with Candlemas we will say farewell to the tree and to the wreath of bay upon the door. We’ll pack up the ornaments, and the tree will be laid to rest in a quiet corner of the garden. Next winter, at the solstice, we’ll use that same tree, dried over the course of the year, to fuel our solstice fire. And with Candlemas, we’ll shift our view from one of winter to one where the renewal of spring is close at hand.

Image: Snowdrops at the Wilkins Family gravesite at Pioneer Cemetery, Eugene, Oregon. Particularly fitting, for the Snowdrop, beginning to bloom now in many places, is an ancient symbol of Imbolc. Photograph by Convivio pal Paula Marie Gourley.

It’s Order Packing Night! Our Dia de Los Muertos goods are always authentic, always handmade, and always from traditional artisans in Mexico. And now, on sale! Use discount code STREETFAIR at checkout for $10 off your order of $75, plus get free domestic shipping. Shop here: https://conviviocatalog.conviviobookworks.com. It’s the link in our profile.

Wowsers! Our first time out in almost two years and I think we did it right with an amazing meal served family style thanks to @acookshomage and her fabulous @elisabettas_ristorante. It was a slightly belated celebration of Mom’s 95th birthday. We got to eat under the stars and be treated like royalty. Mom loved it. #allafamiglia

Our cards and spiral bound journals with Dia de Los Muertos imagery are by Annette & Teresa Armas, a mother/daughter team in California. Their wares, like everything else in our shop, is on sale! Use discount code STREETFAIR at checkout for $10 off your order of $75, plus get free domestic shipping. Shop here: https://conviviocatalog.conviviobookworks.com. (It’s the link in our profile.)

Last night, we watched the 1981 #filmnoir movie “Body Heat” for the very first time, starring William Hurt, Kathleen Turner, and our own City of Lake Worth. It was kind of fascinating placing the film locations 40 years later. First image has character Ned Racine walking through Downtown with City Hall in the background; in the second, he’s across the street from the bookstore we came awfully close to buying in 2020. They say that though the storyline revolves around a heatwave, it was really cold here while they filmed. The sweat had to be sprayed on and Hurt & Turner had to suck on ice cubes in between takes so their breath wouldn’t steam the cold air as it left their mouths.

The film? Not half bad. Suspenseful. And Lake Worth has only gotten better with age. The film may play a part in my upcoming Hallowe’en Dispatch from Lake Worth. Watch for it later this month!

And just like that, the shadows have lengthened and the quality of light has shifted. Two weeks past equinox, and even here, in this strange green land, autumn makes its subtle presence known, kindly reminding summer to pack its bags.

Our Dia de Los Muertos goods are always authentic, always handmade, and always from traditional artisans in Mexico. And now, on sale! Use discount code STREETFAIR at checkout for $10 off your order of $75, plus get free domestic shipping. Shop here: https://conviviocatalog.conviviobookworks.com. (It’s the link in our profile.)