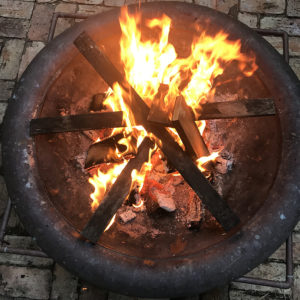 Just as the Northern Hemisphere’s midwinter solstice is accompanied a few days later by Christmas Eve and Christmas Day, so our midsummer solstice is accompanied a few days later by St. John’s Eve and St. John’s Day, and we find ourselves today at the polar opposite of Yuletide and Christmas. The solstices are a matter of celestial mechanics––the workings of our planet orbiting the sun on a tilted axis. That tilt of 23.5 degrees is all it takes to bring us our seasons. The tilt means that as we travel around the sun, our north/south hemispheres receive different amounts of sunlight. And at this time of year, the hemisphere that is pointed toward the sun (Northern) is in summer, the hemisphere that is pointed away (Southern) is in winter. The difference in sunlight across the planet ranges from none at the equator to the extreme at the two poles. Places like Scandinavia and Alaska and Northern Canada right now are experiencing incredibly long days, the days that earn these places nicknames like “Land of the Midnight Sun,” while Antarctica is in almost constant darkness.

Oh but let’s get back to Christmas and St. John’s Day. Historically, the Church has rarely been concerned about celebrating birthdays. The feast days of saints are all focused on when they died––their birthdate into the next world. But there are three cases where they do focus on earthly birthdays: with Mary, whose birth was placed near to the autumnal equinox (September 8, at the grape harvest), and Jesus, whose birth was placed at the midwinter solstice (“Jesus, the Light of the World” (as the song goes) comes at the darkest time of year). At the midsummer solstice, we have John the Baptist, born just as light begins to wane. “He must increase, but I must decrease,” we read in John 3:30. And so there: the beautiful metaphoric connexions that the early Church loved, linking the story of Christ to the natural rhythm and wheel of the year.

Midsummer and St. John’s Day are not much celebrated in the States, much to our loss. But in other places, St. John’s Eve is a night to spend out in the open air. In Sweden, where this night is called Juhannus, it is a night for bonfires and meals of pickled herring and new potatoes with sour cream. Further south in Italy bonfires are also part of the night, but the meals vary by region. In Rome, the Midsummer meal centers around snails; local belief holds that eating snails, horned as they are like devils, will protect you from Midsummer mischief of the Midsummer Night’s Dream variety. In the towns of Northern Italy, Midsummer is a time to break out balsamic vinegar, aged as long as a hundred years. Every part of the meal has some of this nectar of the gods in it, for the lore of the land says that this is the time of year when the must enters the grape on the vine, and it is the must that will eventually become both the wine and the balsamic vinegar––a transformative magic all its own. The must is the juice, crucial to both, for good balsamic vinegar is made from must just as is wine. It is then aged all those years in casks of various types of woods: at least a dozen years, but, as mentioned above, sometimes a hundred years or more.

St. John’s Eve has a long history in popular folklore as a portal night, a night when the pathways between worlds is most permeable. It is a night to go and gather plants for their magical properties: fern seed, for example, and St. John’s Wort. The latter will protect you from evil, the former, if gathered properly, is believed to confer the power of invisibility. But not without some peril: the seeds are fiercely guarded by the fairy folk who know more of these secrets than do we. The magical properties of plants also play into Shakespeare’s comedy. Have you ever wondered what is the “herb” (a little western flower, Before milk-white, now purple with love’s wound) that Oberon instructs Puck to fetch and squeeze the juice of onto the eyelids of Titania and then of the lovers? Well, these are the things I wonder about. Oberon goes on to tell us that maidens call it “love-in-idleness,” but in modern terms it turns out the herb is a flower known as Viola Tricolor, also known as Heartsease or Wild Pansy. You may have some blooming now in your summer garden. So much magic, so close to home.

As for the portals on this portal night: our mostly logical 21st century minds don’t subscribe much to magic, but magic can take many forms and can mean different things to different people. If you want to think of magic in terms of calling down joy to your life, in transforming the events of each day into positivity through an open and giving attitude, well, I am all for that magic. This is a powerful alchemy, a magic we all have access to. There are places, though, where folks insist they run into magic of a more ethereal kind, still today in this logical world we live in. Those in Ireland and Britain have their faeries; the Icelanders have their Huldufólk; the Finns, who are so prominent here in Lake Worth, have their Haltijas. And of course we have Shakespeare. I happen to love A Midsummer Night’s Dream. I just can’t get enough of it. Some scholars place the action of Shakespeare’s play at May Eve, but this is not an idea with which I agree, and I firmly believe our pal Will set the play squarely in the heart of the mysteries of St. John’s Eve.

Be that as it may, the night passes and St. John’s Eve ushers in St. John’s Day on the 24th. As for St. John himself, he is sacred to Puerto Rico, Québec, and Newfoundland. He is a patron saint of beekeepers, tailors, innkeepers, and printers like me. Tradition would have us cut and fashion divining rods on his day, for hidden treasures are thought to reveal themselves on St. John’s Day. Explore lonely places, it is said, and there these treasures shall be, awaiting any lucky finder. The magic passes with the day. It is customary to eat strawberries on St. John’s Day, and in Estonia and Finland, a special St. John’s Day cheese is made, flavored with caraway seeds. Luckily no one has made a tradition of eating the foods that St. John himself is known to have eaten: “And his meat was locusts and wild honey” (Matthew 3:4). Try serving that at your next Midsummer dinner and watch your guests clear out in a hurry.

Image: The start of an early St. John’s Eve fire in the yard, June 22, looking a bit like a wheel.