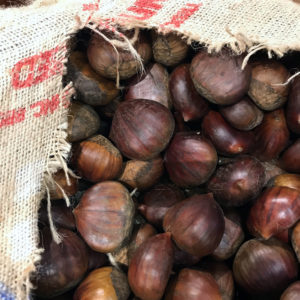 Could be lunch, could be dinner, could be hot dogs or the most elaborate meal ever… in my family, the words that someone always utters afterward are the same: “Have we got something sweet?” We are a dessert people. A demitasse of espresso and a little something sweet puts the proper finishing touch on any meal. Here at home, Seth is even known to partake in what he has dubbed Breakfast Dessert.

This Eighth Day of Christmas is given to such things as we remember St. Macarius of Egypt, who earlier in life was a confectioner in Alexandria. Truth be told, he was not much fun in his later years: He left his confectioners’ trade and he left Alexandria to live an ascetic lifestyle as a hermit in the desert, where his sustenance came from a simple diet of raw vegetables and, only on the most special days, a bit of bread dipped in olive oil. (I can picture my grandmother, holding up her thumb pressed against her index and middle fingers, begging him to just mangia something more than carrots.) Be that as it may, and as completely un-fun as Macarius the Hermit became, it is Macarius the Confectioner we remember most these days, and this is why he is a patron saint of cooks, confectioners, and pastry chefs. And for certain his is not the easiest name to pronounce; for this reason he has also been known over the ages as St. Macaroon (perhaps St. Macaron in France?)––fitting enough for a confectioner, I’d say. Anyway, his feast day, falling as it does within the extraordinary time of the Twelve Days of Christmas, has become a day for sweets.

But first, before we go further, today’s post comes with a gift: it’s the January edition of the ongoing Convivio Book of Days calendar. Click here for the PDF, printable on standard US letter size paper. Cover star this month: a burlap sack of chestnuts, imported from Italy, for the humble roasted chestnut plays such an important role in our midwinter celebrations this month. I imagine Macharius the Confectioner knew this, as well, all those centuries ago. Good things remain constant.

Now, back to our saint. There is a rather nice story attributed to St. Macarius, a story he is said to have told his fellow monks in the monastery, who were interested in leaving the desert for the city. (They claimed it would help them reach more souls with their message, but I suspect they may have been tired of eating carrots and radishes all the time.) Macarius responded with a parable. He spoke of a barber in a small town who earned a small but decent living by charging three coins for a shave. He earned enough this way to sustain himself and his family and to even save a little extra for his old age. But he heard a rumor that barbers in the nearby city were charging a lot more than three coins for the same service. He thought long and hard about this, and finally, he made the decision to sell all he had in the small town and move to the city and set up shop there, where he could earn a larger profit for his services. And so he did.

Sure enough, at the end of his first day in the city, he had earned more than he had ever earned in the small town, and the barber was quite elated. And after closing up shop, he headed for the market to buy food and provisions for his family, but he found that everything in the big city market was much more expensive than it had been in the small town. Indeed, he ended up with no money at all in his pocket that day––a trend that continued each day after. Finally, the barber decided it would be best to return to his native town, where at least he made a small amount of progress each day in his savings.

Macarius and his fellow monks stayed in the quiet solitude of the desert. And of course there is a lesson in this story for all of us: a lesson of quiet patience, the understanding that sometimes what is best for us is right where we are. Which maybe is a good lesson for us in our particular time, too, when we are urged to just stay home. If you’re going to, you may as well enjoy something sweet this Eighth Day of Christmas.