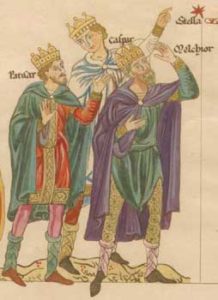 With no particular customs associated with this, the Tenth Day of Christmas, I always take it as good day to prepare for the celebrations to come in the next couple of days: Twelfth Night and Epiphany. To that end, I’m going to include today the recipe I give you most years on the blog ahead of Epiphany: our recipe for Three Kings Cakes, steeped in the ancient flavors of that old desert land where the Christmas story first unfolded.

As for today, this Tenth Day of Christmas brings the Feast Day of St. Titus and St. Gregory, and it’s also St. Rigobert’s Day and St. Ramon’s Day. Titus was a disciple of St. Paul in the first century, and Gregory was a bishop in the sixth century. Rigobert had a trying time of it as an early Archbishop of Reims––political matters mostly––and he is held up as a model of patience. He kept a goose as a pet; that would take some patience, too. Ramon is particularly difficult to know; he was a bishop and he appears in the Chambers Bros. Book of Days on January 4 for the year 1869, but I have found no mention of him since in more contemporary sources.

Those same Chambers Bros. resided in Edinburgh, and in Scotland in ages past this First Monday after New Year was known as Handsel Monday, a day not so unlike Boxing Day in England. Servants and workers were given a hearty meal and a gift in hand (that’s the handsel), as well as the day off from all labor. It was the traditional day to bestow presents upon the mail carrier and the newspaper boy. In more rural areas the day was often kept at its Old Style date, celebrated on the Monday after the 12th of January and called Auld Hansel Monday (like our New Year’s song Auld Lang Syne). If there are readers in Scotland (Carolyn, I’m talking to you!), I’d be curious to know if any celebration of Handsel Monday continues today.

So, take today as a day of quiet, or, if you still have it in you to celebrate another grand event or two (I told you at the start that the Twelve Days of Christmas are extraordinary days that reside outside ordinary time) then let’s start preparing, for tomorrow evening brings Twelfth Night and the next day, Epiphany. In this house, we sometimes mark these closing days of the Yuletide season quietly, and sometimes with a big meal and a gathering of family and friends. This year, obviously, it will be quiet. With Twelfth Night and Epiphany, our focus shifts outward––toward the Magi who traveled to see the child and outer yet, to the star they followed on their journey. Stars make us think of larger things: far distances, light, the galaxy and the universe beyond. Christmas itself is close to the heart, but with Epiphany, the heart expands, as the universe, too.

Here at home, we bring out the illuminated paper star lanterns come Twelfth Night and we make Christmas sweets that, no matter how much we try to make earlier, we never seem to get made until the last few days of Christmas. Maybe it is a subconscious decision, for these baked goods feel older, more influenced by ancient flavors, flavors old and familiar to the Magi: Baklava flavored with honey and walnuts, and our friend Paula’s Kourambiedes cookies, each studded with a clove, and our Three Kings Cakes, flavored with honey, rose water, currants, and dates––flavors of the desert, of our ancient past, of that very first Christmas. The cakes are contemporary riffs on old flavors, but the Baklava and the Kourambiedes have a much longer history, the stuff of time immemorial. It’s easy to imagine that our friend St. Macarius, the fourth century confectioner that we celebrated on the Second Day of Christmas, was making these very same things in his shop in Old Alexandria.

So, while there are no particular customs for this Tenth Day of Christmas, mine has become the making of these delicious Three Kings Cakes, so they are ready for Twelfth Night and Epiphany, and perhaps this is the best custom of the day. The recipe yields three cakes, cakes you will prepare in three loaf pans. You will end up with one cake for each of the Magi, who have traditionally been called Caspar, Melchior, and Balthasar, though no one knows who they were really. As the story goes, it took the Magi all this time to travel through the desert, and seeing the child lying in the straw was their great epiphany. Rose water is the main flavoring, mysterious and familiar all the same. We happen to sell a wonderful rose water made at the Sabbathday Lake Shaker Community in Maine. If you’re local and you need some to bake these cakes, and if you don’t mind coming by for a pick up at our front porch here in Lake Worth Beach, use discount code PICKUP when you check out at our website; the code will deduct the $8.50 shipping charge. I’ll also be happy to make a free bicycle delivery to you if you live in our 33460 zip code––be sure to include your phone number when you order so we can arrange a pick up or delivery time.

This recipe began with Jeff Smith, who loved Christmas, but I’ve altered it over the years and this year, I updated it a bit more: I’ve cut down a bit on the currants, but added in some chopped dates. Again, more of the flavors of that desert land. Yule love these cakes! (Sorry, I get a big kick out of that. You can rest easy now that that’s probably the last time I’ll get to use yule that way this Christmastime.)

Preheat oven to 300 degrees. Cream together the butter and the sugar, then add the eggs and vanilla. Beat smooth before adding the remaining ingredients. Grease 3 loaf pans (about 8″ x 4″ x 3″ or so) and divide the batter amongst the pans. Bake for one hour, or until a toothpick poked into the center of each cake comes out dry. Let the cakes cool in their pans on a rack.

Once the cakes are baked, combine the syrup ingredients, except for the rose water, in a saucepan over medium heat. Once the sugar dissolves, add the rose water. Remove the cinnamon stick and the cloves and then pour the hot syrup over the cakes in their pans, divided equally amongst the three cakes. The syrup will soak into the cakes. Allow to cool completely before unmolding from the pans. Serving the three cakes on three platters makes for a nice presentation on Epiphany Day or on Twelfth Night.

Image: “The Three Magi,” an illustration from the reproductions of Herrad of Landsberg’s Hortus Deliciarum by Christian Moritz Engelhardt, 1818. [Public domain] via Wikimedia Commons. The original book, known in English as The Garden of Delights, was made by Herrad of Landsberg, a 12th century nun and abbess of Hohenburg Abbey. The original perished in the burning of the Library of Strasbourg in 1870 during the Franco-Prussian War, but luckily we do have Engelhardt’s 19th century reproductions.